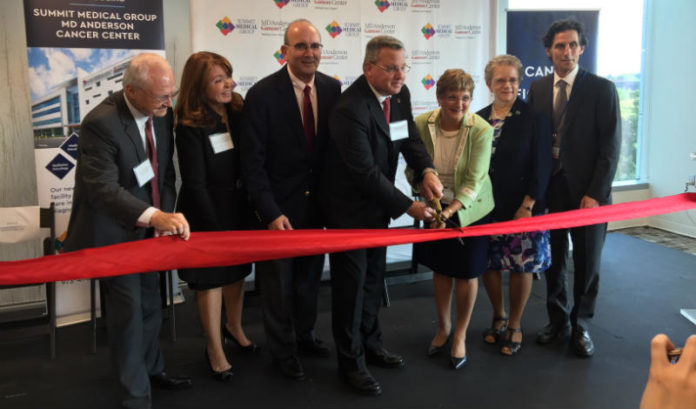 The Summit Medical Group founder and CEO even noted the Florham Park location is at the confluence of interstates 78, 287, 80 and 280 and Route 24 — making it easily accessible to many.

But LeBenger, who turned a career as a doctor into an organization that is now the largest independent multispecialty physician group in the country, has never let size and scale be a defining factor in his mission.

“I always consider Summit Medical Group a family business, and I always will,” he told ROI-NJ after the ribbon-cutting ceremony Wednesday afternoon. “I’m a physician at heart and that’s the way I always look at things.

“I just want to be able to offer care — where you have good patient engagement with good provider engagement — to my community.”

The cancer care that he now will be able to give to that community, as he calls it, just got a whole lot better.

To LeBenger, that means his patients can get an integrated treatment plan without leaving the facility.

“Now, it’s under one roof, where you have a comprehensive integrated network of care where you will help the patient from diagnosis to survivorship throughout that whole continuum. This facility enables us to do that. And partnering with MD Anderson, the No. 1 cancer institute in the world, it’s the best of both worlds.”

The MD Anderson brand should serve as an attraction.

Adrienne Kirby, the executive chairman and CEO of Cooper University Health Care, said her MD Anderson Cancer Center facility in Camden — which was celebrating its fifth anniversary Wednesday — has seen the relationship provide a tremendous boost for Cooper and for residents in South Jersey.

“When we began the partnership, MD Anderson was recognized by 7 percent of the population in our market; people didn’t even know who MD Anderson was,” she said.

Five years later, Kirby said, the center is ranked No. 1 in the Southern New Jersey market.

“We are treating over 100,000 patient visits a year,” she said. “That’s tremendous growth.

“Based on our experience in the South, we have every confidence that, with this great team here and this great facility and the work that already has been done, we expect to see our friends and colleagues here at Summit exceed those numbers.”

LeBenger said he’d be happy to do that — but he said beating the competition is not necessarily the first goal.

“It’s not the competition that I care about or worry about,” he said. “It’s the patients of Summit Medical Group. We want to be able to keep their care within the Summit Medical Group, so it is fully integrated, which has proven a benefit for survivorship for that patient.

“We’ll continue with a marketing campaign and market our relationship with MD Anderson. But, to us, it’s most important to do internal marketing to our patients of Summit Medical Group.

“Right now, we see about 10 percent of the population of northern New Jersey. So, we would like to let that patient population know — as well as that other 90 percent — what we have to offer and why Summit Medical Group is the best care you can have in the community.”