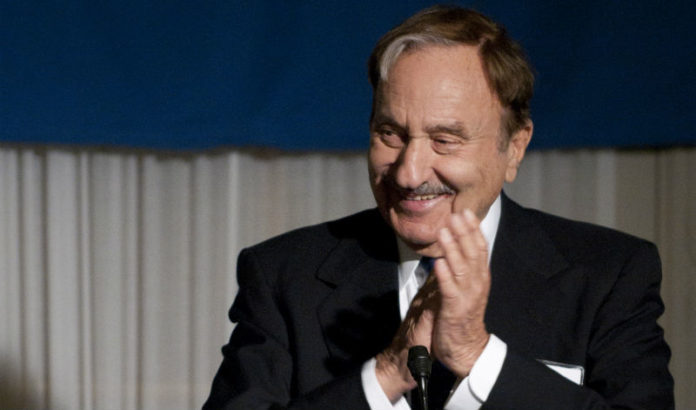 It’s been six years now, but Peter Reinhart says he still remembers it as if it were yesterday.

As Jay Kislak took the stage to address the crowd on his 90th birthday — and he did so, Reinhart said, by hopping up on the riser — a rainbow suddenly appeared through the window of the room at the W Hotel in Hoboken.

“It was almost like God was saying, ‘This is a really great guy,’” Reinhart said.

“He was just a special person,” Reinhart said. “He had amazing energy and was a great story-teller.”

Kislak, the patriarch of the Kislak Organization, passed away Wednesday in Miami. He was 96.

It was a life well-lived.

Kislak was born June 6, 1922, in Hoboken. He spent his life exploring unusual places, ideas and ventures, forging relationships and assembling extraordinary treasures, which he generously shared. His achievements encompassed many fields of endeavor — business, collecting, flying and philanthropy, to name just a few.

Entrepreneurial and driven, Kislak got his first real estate license while still a high school student at Newark Academy. He earned a degree in economics from the Wharton School of Finance at the University of Pennsylvania, graduating early to serve as a Naval aviator in World War II.

Upon returning home to New Jersey in 1945, Kislak entered the family real estate business full-time and made it his life’s work.

It was hard work, Reinhart remembered.

Kislak was the second-generation leader of the company, but he was never handed anything, Reinhart said.

“He learned the mortgage business after serving in the Navy during WW II by going door-to-door as his father, the boss, made him do to learn the business,” Reinhart said. “The company required their field people to do the same thing.”

In 2006, on the 100th anniversary of the company, Kislak and the company made a seven-figure donation to Monmouth, which renamed the real estate school in honor of the company.

Reinhart, who wasn’t at the school at the time, said its importance is still felt today.

“It was incredibly significant,” he said. “It allowed us to change from a certificate program, which is really continuing education for people who already had their degrees, to a degree program.

“We were able to start our undergraduate real estate concentration as well as our real estate MBA program with that gift. So, it was really transformative for us.”

Reinhart said that, when Kislak returned to the school, he always held court with students, telling stories. And not just about the real estate industry.

“He told tales about life,” Reinhart said. “He had been so many places and done so many neat things. And he was just a great storyteller.”

Kislak had been to both the North and South poles and made stops on all seven continents along the way.

Jay Kislak and his first wife, Beverly Braverman, had three children — Jonathan, Phil and Paula — and remained friends until her death in 2015.

In the early 1950s, Kislak moved his family to Miami, establishing what would become one of the country’s largest privately-held mortgage banks, originating and servicing loans nationwide for more than 40 years. Until his death, he served as chairman of the Kislak Organization, which today focuses on real estate investment and brokerage.

With his second wife, Jean Kislak, he established the nonprofit Jay I. Kislak Foundation for the conservation and study of materials related to the cultures and history of the early Americas.

In 2004, he donated more than 4,000 items from the collection to the Library of Congress.

This extraordinary gift to the American people, is now on permanent display and features one of his greatest acquisitions — the 1516 Carta Marina Navigatoria, the first printed navigational map of the world by the celebrated German mapmaker Martin Waldseemüller.

Through another landmark gift in 2017, Kislak and his family established two permanent South Florida homes for his internationally significant collection — Kislak Centers at the University of Miami and Miami Dade College Freedom Tower.

In addition to Monmouth, the Kislak Family Foundation also established Kislak Centers at the University of Pennsylvania and supports programs at Florida State University Real Estate Center, the University of Florida College of Veterinary Medicine, and other institutions.

His Majesty the King of Spain Juan Carlos I granted Kislak the prestigious Encomienda of the Order of Merit Civil, and he was named a Miami Living Legend by Miami Today newspaper, a national Unsung Hero by Curtiss Mansion, and received the Lifetime Achievement Award from the Association of Fundraising Professionals on National Philanthropy Day 2017.

Kislak never lost his genuine sense of curiosity, constantly asking questions, interested in learning more, and embarking on new explorations. Into the final decade of his life, his energy, memory and physical bearing were remarkable.

It wasn’t just Kislak’s ability to hop on stage — or his mind, which Reinhart said was sharp to the end.

“I don’t think he had a single gray hair,” Reinhart said. “That just summed up what kind of man he was. Incredibly special.”

Kislak’s memory will live on at Monmouth. And not just because his name is on the school.

The event was made possible by a generous gift from the Kislak Family Foundation.

Reinhart said it was just another example of how Kislak lived his life.

Kislak was predeceased by his parents and sisters, Sima and Naomi, and his first wife.

In addition to Jean, his wife of 33 years, he is survived by his children, Jonathan (Tina) Kislak, Philip (Silvia Figueroa) Kislak, and Dr. Paula (Dr. Peter Mangravite) Kislak; stepdaughter Jennifer (Noel) Rettig; grandchildren Rebecca, Jason, Tamara, Libby and Jane; and great-grandchildren Ezra, Simon, Kayla, Julia, Stokes and Aura. He is also survived by his brother, David, and many nieces and nephews.

His family was among the 25 founding families of Temple Beth Am, now one of the largest temples in Florida, and he also was a member of Temple Israel of Greater Miami and Synagogue Adas Yoshurun in Rockland, Maine.

A celebration of life will be held Sunday in Pinecrest, Florida.