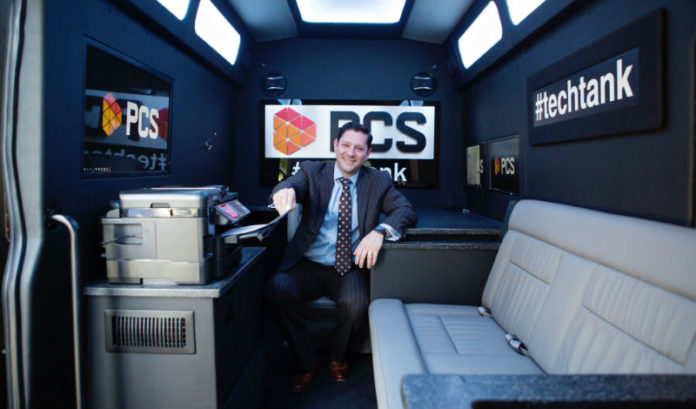 Anthony Mongeluzo said the decision to power his midsize, one-stop information technology and computer support shop with solar was a no-brainer.

“It made sense to help our environment and also from a business perspective,” Mongeluzo, CEO and president of Pro Computer Service, said. “We’re always offering suggestions to our clients about how to increase their efficiency in the information technology world without increasing costs.

“So, when I looked at the economics of going solar, it made all the sense in the world.”

The solar system at the company’s two-story headquarters in Moorestown officially went “live” Thursday at the nearly $18 million company that has helped to fix New Jersey’s technology for nearly two decades.

Mongeluzo said he “unofficially started” PCS in the year 2000 as he worked as a 20-year-old sole proprietor from his parents’ home.

“A neighbor asked me to fix his computer, and I just kept getting referred to other people,” he said. “To be honest, I didn’t even realize then that I was starting a business.”

“There hasn’t been a year when we have not grown by at least 10 percent,” Mongeluzo said.

The company’s current headquarters in Moorestown, after previously having rented or purchased office space in Medford and Marlton, also was an unexpected surprise, Mongeluzo said.

“I knocked on the owner’s door and asked if he wanted to sell the building, expecting him to say ‘No,’ but he said, ‘Yes,’” he said.

Mongeluzo said he purchased the businesses’ fourth headquarters in June 2016.

“Then, when a buddy of mine heard I had purchased the building, he said he wanted to meet with me about solar,” he said. “I said, ‘Listen, man, I’m already overextended and I am not looking to spend another million bucks.’

“But I sat down with him anyway.”

Mongeluzo said he learned his solar needs would require an investment of $1.3 million.

However, from his electric bill to the environment, Mongeluzo said the decision made sense in so many ways.

“After checking with my banker and accountant, they said it was a great deal, especially with the new tax changes,” he said.

So, he signed on the dotted line for solar in August 2017, Mongeluzo said.

“From what everyone told me, New Jersey is the No. 1 most solar friendly state in the country for getting a solar project approved,” Mongeluzo added.

However, though the solar project was completed three and a half months ago, regulations and permits, working with the township and waiting on the electric company all led to pushing the “grand opening” of PCS’ solar power to Thursday.

Still, Mongeluzo said, he expects to recoup his investment within two years after learning about the New Jersey state and federal incentives available for business owners who install solar.

“From what I understand, when you install a solar system, you get a 30 percent federal tax credit — a one-time bonus that you cannot use in New Jersey,” Mongeluzo said. “And, under the new federal tax law, I can depreciate my $1.3 million investment in solar right now. In New Jersey, I only will be able to depreciate it over six years, but that is still good.”

Solar power also will allow Mongeluzo to earn solar renewable energy certificates, or SRECs, he said, which he can then sell back to the local utility company for a credit based on the kilowatts of energy produced by the nearly 1,332 solar panels upon the roof and the carport of his building.

The solar system will provide nearly 100 percent of the building’s annual electric consumption, according to National Energy Partners, which is overseeing the installation.

Mongeluzo said he is lucky to have locked in to solar when he did.

“From what I’ve learned, solar panels are one of the biggest exports out of China,” he said. “With tariffs going up, I may have paid more if I signed now.”

Still, he added, solar has actually opened him up to the idea of purchasing more properties and considering local acquisition targets, especially on the outskirts of New York.

“With the way we are growing, we plan to set up offices all around New Jersey,” he said.

Anthony Mongeluzo, CEO and president of Pro Computer Service in Moorestown, said growing up in an entrepreneurial family helped him to differentiate himself in the information technology and computer support industry.

“My parents owned bars and restaurants,” he said. “So, I think what was unique about me was the mix between being a technically smart person that also had that social element.

“I was able to blend both business and technology to create value. For example, other people may say, ‘OK, your hard drive is broken, let me see if I can fix that,’ whereas I went to different businesses to do my job while also saying, ‘Wait — did you know that you’re also paying $1 per fax? Why don’t we also put this online?’

After a few years of both limited sleep and a personal life, Anthony Mongeluzo, CEO and president of Pro Computer Service in Moorestown, literally decided to conduct some business on the road.

“We are the creators of what I call the Tech Tank,” Mongeluzo said.

Mongeluzo said he converted a Ford van into the ultimate, high-tech, fully functioning mobile office space to better balance his work and life while also being able to increase the speed in which customers could receive support.

Mongeluzo said the added bonus of working on the road is that his company has doubled its sales.

Newell continues changes with $2.3B sale of packaging unit