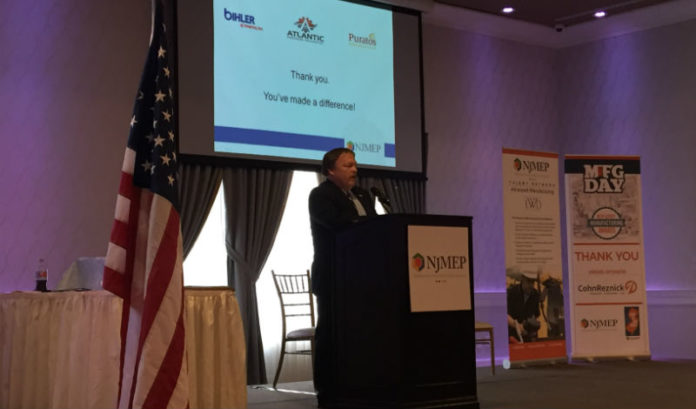 More than 500 manufacturers, elected officials and service providers created an overflow crowd at the seventh annual Made in New Jersey Manufacturing Day on Friday at the Marigold in Somerset.

And that’s a good thing, because, according to John Kennedy — the CEO of the event organizer, the New Jersey Manufacturing Extension Program — the word about manufacturing in the state still needs to get out.

Connecting business with government leaders was one of the key topics of the morning program. And it was emphasized by Kennedy, who retold a story about his efforts to discuss manufacturing issues with members of the Manufacturing Caucus earlier this summer.

“It was very telling to me as I was walking up to see them,” Kennedy said. “I saw the teachers, there had to be 500 of them, waiting to meet with legislators. And I saw the pro-marijuana groups, I’m guessing there was 75-100.

“For manufacturing, there were just two of us. I walked in thinking, ‘What are we doing wrong?’”

Kennedy, who successfully ran and sold two manufacturing companies before taking the lead at NJMEP, said he gets it.

“I tried to get some additional support to come out, but businesses are busy,” he said.

But, at the same time, he said it’s time for manufacturers to take on a greater role in the process.

“That’s why an event like this is so important,” he said. “We’re trying to connect people — but people have to step up.”

The potential, he said, is there.

“There’s 1.1 million people who work in manufacturing in the state,” he said. “We can vote in anyone we want — but we can’t get together on it.”

The good news: The people who have been voted in want to hear from them.

One is state Sen. Steve Oroho (R-Sparta), a member of the caucus.

“The interaction with legislators and the people who work in the executive branch is so important,” he said. “Everybody thinks an elected official knows about everything going on. Guess what: We don’t.

“John is doing a great job finding ways to bring people together. It needs to continue. And it’s really important for our business community to know, it’s not lobbying, it’s educating. We have to make sure people understand that.”

Assemblyman Andrew Zwicker (D-Monmouth Junction), another member of the caucus, also pushed for more communication — and not just among manufacturers and the caucus.

“The key message that people outside of the Manufacturing Caucus don’t get is: 1) The rich history of manufacturing in New Jersey; 2) The incredible economic benefit of manufacturing in the state; and 3) The role of manufacturing as a job creator — and it goes from an advanced degree person who might be the engineer, to those coming out of the tech schools that may be implementing it.

“More people in business and government need to understand this. It’s a message that hasn’t gotten infused.”

Zwicker said the opportunity is there.

“This is the time,” he said. “The governor just made his major economic speech where he said we’re going to push innovation. These companies need to be front and center.”