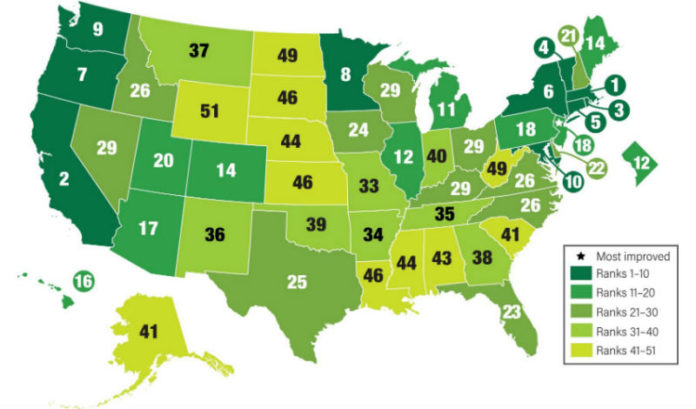 States are investing more into energy efficiency and power savings, according to the 2018 State Energy Efficiency Scorecard.

The report from the American Council for an Energy Efficient Economy identified New Jersey among its most-improved states. This is due to to recent plans by the Murphy administration to boost investments in efficiency and clean energy.

The scorecard, which ranked the state based on 32 metrics in six areas, found New Jersey:

“The fact that New Jersey has emerged as the most-improved state speaks volumes on the state’s commitment to becoming a 100 percent clean energy state by 2050. We’ve made enormous progress in very short order, but there remains more hard work ahead. I look forward to New Jersey’s continued leadership on making our environment healthier, cleaner and more sustainable for future generations,” Gov. Phil Murphy said.

Other East Coast states also fared well in the rankings, including Massachusetts, which continued to rank No. 1 overall. California came in at No. 2, while Rhode Island, Vermont, Connecticut, New York, Minnesota, Washington and Maryland all followed, consecutively.

Working Mother’s list of best places to work for mothers (and...

The Vitamin Shoppe inks Knight as its new CFO