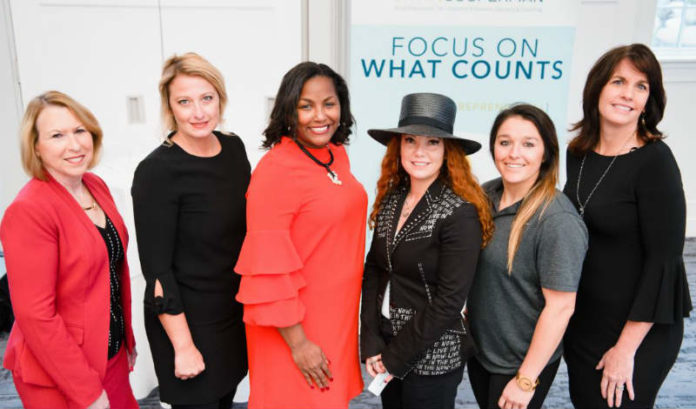 “You just have to let us be the mothers and women we are without trying to fit us in 9-to-5 boxes,” she said, as she spoke to a room of more than 175 business professionals at Citrin Cooperman’s fifth annual Women at the Wheel conference Thursday at The Park Avenue Club in Florham Park.

Gilvar, CEO of Believe Inspire Grow (or “B.I.G.”) — a for-profit organization headquartered in Bernardsville that promotes women’s entrepreneurship and work-life flexibility — was one of five honorees this year chosen to speak at the annual presentation.

“I was going to be that career woman who figured it out with my kids, my husband and I were going to travel, and it was going to be glamorous and awesome — until I held my newborn baby in my arms,” Gilvar said.

Though Gilvar said she was fortunate enough to opt out of her career in advertising, she said she always felt as if she should be doing more.

“There were so many women like me sitting on the sidelines,” she said. “I thought, what if we could find a way to become professionally fulfilled and still be able to take care of our families and personal commitments?”

What started as 42 likeminded women in her living room has grown to more than 3,900 members today who inspire and support each other with flexible, entrepreneurial opportunities.

But Gilvar said she wishes B.I.G. never had to be created in the first place.

“I’d love for my organization not to have to exist to give women the idea of pursuing their purpose and passion, because why should they ever forget that?” she said.

Women bosses who turn on other women, she added, are the worst culprits.

“We are supposed to support each other and, you know what, millennials have it right — if you think the next generation is going to come and sit in a cubicle for 40 to 60 hours each week and be grateful for a paycheck, you’re wrong,” Gilvar said. “They’re going to walk, they will waitress if they need to, and they will then come up with something that works for them.

“Corporations need to evolve to understand that, if you want the best of your people, you need to treat them like people first.”

Kelly Akre, managing partner at Grignard Co., a specialty chemical manufacturer in Rahway, said she did leave an industry due to the people she was forced to surround herself with.

“Principles are different than values,” she said. “Values change with who you are, and my principles were being challenged in the garment industry.”

Akre said she therefore began accepting weekend work with her entrepreneurial husband, Etienne Grignard, to one day become the head of the company that started with three employees and now employs nearly 40.

“I am proud of and want to teach my children about my work ethic,” Akre said. “There is no magic clinic or degree for that — you either do or do not; there is no try.

“I’ve done several things wrong. I’ve failed many product lines. I’ve offended people. But I’ve also employed and sponsored a lot of people, including women and those holding H-1B visas. And I am grateful for that opportunity.”

Growing up, Natasha L. Hemmings, CEO of Girl Scouts Heart of New Jersey, said her mother taught her to also think beyond herself.

After studying communications and theater in college and accepting a sales job to pay the bills, Hemmings said she began to question why.

Hemmings said she then accepted a communications job with the Girl Scouts of America, where she would work her way up to become the chief marketing communications officer for more than a decade.

“I realized in applying for that job that the organization was about so much more than their cookies,” she said. “Every dollar I ever spent on those cookies went toward the higher purpose of educating young women.”

Then, when she applied for a CEO position within the organization in 2013, she was told it was her lack of a master’s degree that kept her from getting the job.

“I enrolled at Rutgers University that fall because I would not let that stop me from getting where I was supposed to be,” Hemmings said.

In March, Hemmings was announced as CEO of Girl Scouts Heart of New Jersey, serving seven counties within the state as the first African-American CEO within the organization.

“I had set my mind to something and my daughters could see that I had goals, I knew how to accomplish them and that they could be proud of their mother for having overcome so much,” she said.

After helping design clothing for her son, Oliver, who was born with a rare form of muscular dystrophy, Scheier worked with Tommy Hilfiger in 2016 to make fashion history by releasing its first line of mainstream adaptive clothing.

“If I had designed my own line, that would have been just one more reason why this community of people — almost 1 billion people on our planet with a disability — would feel different,” Scheier said.

It was not only the right thing to do, she said, but an incredible business opportunity.

“It never hurts to ask,” Scheier said. “I asked many people how to get to the CEO of Tommy Hilfiger. What was the worst they could say? ‘I’m sorry, I can’t help you, I don’t know the right people?’ But I found someone who did.”

At 26 years of age, Brooke Gagliano was the only honoree this year who is not a mother.

However, she said she still knows what it’s like not to want to fail anyone at any time.

As the CEO of Frutta Bowls, a multimillion-dollar açai bowl franchise headquartered in Freehold, Gagliano said she is opening her 38th franchise store this weekend and plans to have 53 stores open in 16 states by the end of the year.

It has been a wild ride, she added.

After graduating from Drew University, Gagliano first turned her passion for athletics and health into her first business as a personal trainer and nutritionist.

“My dad is a contractor and my mom is a hairdresser, so my dad built in our basement both a gym and a hair salon so that we could run our businesses,” she said.

But, after traveling to California in February 2017, Gagliano said she returned home with the idea to open a healthy, quick service açai bowl concept.

Her parents, she said, were again supportive.

“My parents agreed to give me a loan,” Gagliano said. “So, the next morning, I had created the LLC, was drawing up the logo, had drafted a business plan, and I said, we need to open before summer.”

Gagliano received the keys to her first store in Howell in April and opened in May.

A year later, she was franchising what she calls the “family business.”

“The people who have known me from when I was a little kid know that I’m going to do whatever I can to be successful,” she said.

Application portal for more than $16B in grants for shuttered venues...