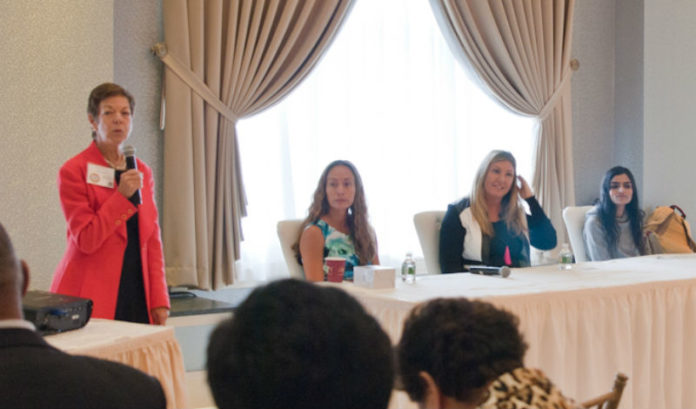 “While nearly 14 million Americans have a career in manufacturing, a study conducted by Deloitte last year showed that, while women represent half of the total workforce, less than 30 percent have jobs in the manufacturing space,” Glick said.

Glick, principal and chief growth strategist at Sobel & Co., a certified public accounting and consulting firm in Livingston, brought women in the manufacturing space into focus when she moderated a gender-focused panel at the seventh annual National Manufacturing Day last week.

The event was hosted Friday by the New Jersey Manufacturing Extension Program and held at The Marigold in Somerset.

“Women are severely underrepresented in the manufacturing sector, and yet all of the research shows that, when there is gender diversity in any organization, particularly in manufacturing, there are huge benefits: an improved ability to innovate; higher return on equity; and better employee performance,” she said.

Hipatia Lopez, inventor, founder and CEO of the Empanada Fork in Elmwood Park, said those same statistics drove her to try something she never had before.

“But I am a firm believer that you know if you are meant to do something else in life.”

Being a woman in manufacturing can be trying.

Brenner said she had no idea about the industry when she moved from finance in construction and real estate into manufacturing when her husband Sidney died in 2011.

“When I showed up at the company which I was now the owner of, I had to figure out if I was going to sell or stay,” she said.

Brenner said she decided she could not let the nearly 50-year-old, family-owned manufacturer of medical and field equipment for the U.S. Department of Defense fall apart.

“I spent my first two years learning about the machines, the materials, the logistics, the bidding process and more,” she said. “My favorite question was and still is, ‘I don’t know. Can you please explain it to me again?’

“It is the only way to learn.”

Forward-thinking is key to her business, too, Ramesh said.

“Our supply chain and team are all connected by proprietary technology called the Suuchi Grid,” she said. “It connects every part of our process while providing real-time data, tracking and transparency for our clients.

“We are very excited to dramatically change what manufacturing is today around the globe with our confluence of technology, automation and culture.”

Created in 2015, Suuchi Inc. utilizes automation and a vertically integrated, end-to-end supply chain to source, design, manufacturer and ship clothing and accessories for leading apparel fashion brands and companies in as quickly as five days.

“We do this all in New Jersey and are presently moving to a location 10 times our present size,” Ramesh said. “If you look at some of the companies in the last decade who have scaled insanely fast — companies that have applied disruptive technologies to analog industries, such as Lyft for taxis, Compass for real estate and Katerra for construction — if there are so few women in manufacturing and also in STEM, we really need to have more women leverage their geekiness to transform traditional industries.”

Disruptive ideas can be spurred at any time. And anywhere.

Lopez said that, while she worked in public accounting, she and her husband often would host gatherings at their home in which he would cook empanadas.

But Lopez added she grew frustrated with — and even lost sleep over — the amount of time it took to seal them.

“I decided there had to be an easier way,” she said. “When you have an idea and you think it is crazy, that is when passion is born.”

Lopez said she wanted to create a pastry press that would more quickly make the fork-like seal upon the dough.

However, after contacting multiple patent attorneys, she learned it would be an expensive gamble — one that would require Lopez to spend her Christmas bonus on her dream rather than on holiday gifts for her children.

“I held a family meeting and said, ‘Mommy wants to spend the money on this’ — which, I thought was very selfish,” she said. “But when I told them what it was I wanted to do, they said, ‘You must!’”

One failed prototype and a few manufacturers later, Lopez now manufactures the Empanada Fork in China.

“I get a lot of backlash for manufacturing in China, but people don’t seem to understand that if I were to manufacture here, I would make no money — most of which I invest back into the business,” Lopez said.

Despite some criticism, the Empanada Fork has sold on the Home Shopping Network and currently sells on multiple e-commerce sites, including Amazon.com and UncommonGoods.com.

“Every ethnic group has an ‘empanada,’ it seems,” Lopez said, as she described how her customers also use them for dishes such as apple turnovers, samosas, and calzones. “It is such a diverse food that it became a bigger product than I had envisioned.

“I also now feel like a voice for so many women who have called and asked about the invention process.”