We once knew someone who worked in retail. High-end retail. One of the nicer stores at the Mall at Short Hills, which is one of the nicer malls in the country. The store managers were nice, the store was clean and, while the customers could certainly be demanding at times, they rarely were rude.

The only downside? The pay. The hours. And the benefits.

We thought of this when supposedly big, bad Amazon — the monolith that some say is destroying retail for everyone else in the country — announced last week that it was raising the pay of all its employees to $15 an hour. Starting Nov. 1. Amazon didn’t need to mention benefits because all Amazon employees already get a nice slate of benefits — including programs that will help employees get more education — on the first day they start.

And, with that, without any protest, debate, vote — or government intervention — Amazon immediately lifted all of its now approximately 18,000 full-time employees in the state to a level even the most corporate-bashing ideologues consider a fair living wage. 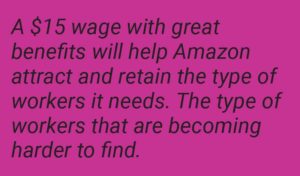 Of course, per-hour jobs are only as good as the hours that come with them. At Amazon, employees work 40-hour workweeks. Ask any person who works retail how unusual that is. How hours are often capped at an ACA-friendly 29.5. How they often get sent home early — or worse, are told they are “on call” and have to check to see if they are needed at all.

Perhaps Amazon is on to something.

Its founder and CEO, Jeff Bezos, a Princeton grad, said he made the move in hopes that other companies would follow. We applaud his efforts. And we do so because it’s more than an example of leading, it’s an example of the defining principle in business: supply and demand.

Anyone remember the fight over tying the minimum wage to the cost of living? Or the “Fight for $15” going around now?

Amazon also is making the move because it’s good for business. Make no mistake, a $15 wage with great benefits will help Amazon attract and retain the type of workers it needs. The type of workers that are becoming harder to find. And it will force others to match it.

We’re already seeing it. A sign at the wall of a local burger joint talked about starting salaries of $12-15, depending on experience. A grocery store is offering people $14 an hour to bag.

This is not a call for the end of organized labor or negotiated contracts. And we’re not so Pollyannaish to think all companies will follow. But the good ones — the smart ones — will. And they won’t need the government to tell them to do so.