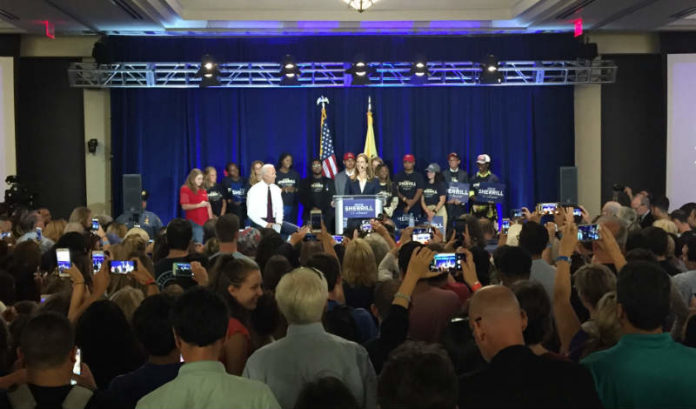 The poll found Sherrill holds a 48 percent lead over Webber (44 percent) among likely voters, with 1 percent supporting another candidate and 6 percent undecided. These results are in line with Monmouth’s June poll, it said, except there are now fewer undecided voters.

“The basic contours of this race have not changed. Even though Republicans have the edge in party affiliation, many are not happy with the president or key GOP initiatives such as the tax reform plan,” Patrick Murray, director of the independent Monmouth University Polling Institute, said.

“Most of the voters who say they have been motivated by the Kavanaugh nomination are partisan identifiers, which suggests this issue has been more likely to firm up their choice rather than actually flip their vote. These results suggest that the factors driving this race have already been baked in. Any new developments only serve to strengthen the choices voters were already inclined to make,” Murray said. “But we did notice some very slight shifts over the weekend as the confirmation vote played out but nothing definitive. We will continue to monitor this issue in future polls.”

NJ-11 voters are divided on their preference of the Republicans (45 percent) or Democrats (42 percent) having control of Congress.

At the presidential level, district voters are evenly decided between approving (49 percent) and disapproving (48 percent) of the job Trump is doing.  With three-fourths of NJ-11 voters (74 percent) saying they have a lot of interest in the upcoming House vote, 75 percent say the president is a very important factor in their vote, with 84 percent being Trump opponents and 77 percent being supporters.

Among many of the issues involved in the race, the Republican tax plan is unpopular in NJ-11 (43 percent approve, 46 percent disapprove) where many are wondering about the impact of the new SALT deduction limits.

“If anything should play well in a wealthy Republican district, it’s a tax cut. But the elimination of certain deductions takes the sheen off this plan for many voters in New Jersey’s 11th,” Murray said.

National origin discrimination and Russia’s war on Ukraine: Why employers must...