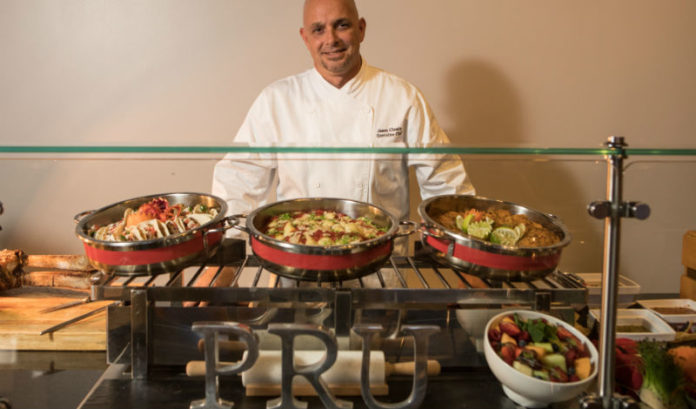 Back then, he was just trying to learn the craft, which included learning how to make it through a training day.

After graduating from culinary school in Seattle, he headed to Prague for what he called an opportunity of a lifetime.

“I cooked for a master chef,” he said, chuckling at the experience. “I spent 18 months getting yelled at and getting pots and pans thrown at me, doing the true culinary apprenticeship.”

When he returned to Seattle, he started working in fine dining.

“I got lured into opening the new Seahawks stadium in 2000 and I haven’t looked back,” he said. “I’ve worked my way around the country, done baseball, football, basketball, hockey — arenas and stadiums both as an executive chef and a regional chef.”

He’s cooked for major sporting events (the World Series, Super Bowls), international events (Starbucks Global Conferences) and even for a rodeo, during a stop in Houston.

The challenge of the job is what keeps it fresh, he said.

“That’s the joy of it,” he told ROI-NJ during the Prudential Center’s annual try-our-new-food event Tuesday (see full story here). “If you’re the chef for an Italian restaurant, 365 days a year you’re cooking manicotti, spaghetti and veal parmigiana. I get to do that on Tuesday. On Wednesday I’m doing some Bao. On Thursday, it’s sushi. It’s always changing.

“We do a lot of private events here, so we’re doing custom menus all the time. As a chef, it’s daunting creatively, but I love it.”

First, it’s the goal of making sure all the meat and vegetables are locally sourced.

Then, there are the massive numbers of people that need to be fed in a short period of time.

“I work in pallets of things,” he said. “Keeping that quality level is a challenge.”

Then there’s the way the event changes the patrons.

“We’re constantly reimagining what we’re doing,” he said. “You’re going to see the tacos, the filet mignon and the sushi for a (New Jersey) Devils game.

“And then Disney on Ice comes through and I’ve got to have deep-fried peanut butter sandwiches, sno- cones and chicken fingers.

“And we still have to please the parents.”

Choate, a Newark native, came to the Pru Center in the fall of 2016. He loves the new concepts he is offering — including a variety of steak sandwiches, ramen and rice bowls and hand-picked items from other regions — but he said he’s just as proud of the smaller changes he has helped institute as well.

“Almost every stand has something new,” he said. “Take the craft dogs: We’ve got a buffalo chicken dog, which is a dog topped with chicken fingers, blue cheese dressing and some hot sauce. And we’ve taken some of the Asian pork and picked Asian vegetables on top of another dog.

“So, we’re really trying to give people different opportunities to try these ingredients in different ways.”

He said he is open to anything.

Choate said he will not cater the menu to the region where the Devils’ opponent comes from.

So, you will not find Texas BBQ when the Dallas Stars are in town or ham-and-pineapple pizza when the L.A. Kings arrive.

As someone who has been working for professional sports teams for nearly two decades, he knows the golden rule. At the Pru Center, it’s simple: Don’t upset the hockey gods.

“I won’t do anything that shows support for the other team,” he said with a laugh. “There’s a little voodoo around that.”