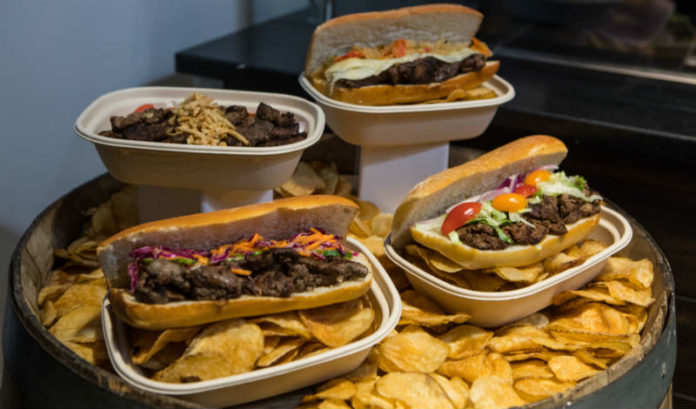 It’s all good if you think a few of these menu items seem a bit out of place for Newark and New Jersey:

You just better get used to it.

Some of the latest menu items at the Prudential Center — available to everyone who enters the building — are going to be favorites from other parts of the country.

The Line Change (hats off to the creative name) will feature items picked by a New Jersey Devils player representing his hometown. In this case — and for the first 10 games of the season — they are the selections of Miles Wood, the team’s 23-year-old left wing who played high school and college hockey in New England.

Jason Choate, the executive chef of the arena, explained the idea — and why it was pretty easy to get the players involved.

“The guys were really into it,” he said. “Having a chance to not only have their names attached to it, but put their favorite foods out there for the fans was really cool for them.”

Choate was speaking at the arena’s annual taste-our-new-food event Tuesday night, two days before the Devils and the Pru Center start their fall season. The Devils have their home opener Thursday and play again on Sunday — games that sandwich two major concerts, the Eagles on Friday and Phil Collins on Saturday.

And Bowled Over (Section 4, main concourse) will feature:

Choate said the new offerings are the latest example of arena food matching or exceeding what its foodie fans have grown to expect on the outside.

“I’ve cooked around the world, and I’m really excited to be able to bring so many international flavors to the masses. It’s a daunting task, but it’s a challenge we love to take on.”

One mouth at a time.

Despite the rich variety of food options the Devils served last year — numerous ethnic dishes, New Jersey favorites and high-end options such as filet mignon — one fan felt something was missing: A true deli sandwich.

The season-ticket holder brought his favorite sandwich in from a Newark deli — then was surprised when two chefs from the arena came with him to visit the local joint.

The next game, a sandwich piled high with house-roasted pastrami and turkey with slaw and thousand island dressing on a local rye was waiting for him in his suite. Next to it, was the name: The Joel — named for the fan himself, of course.

“It was exciting to be able to do this for just a single fan, but we liked it so much we had to throw it on the menu for everyone,” Choate said.

That’s food service at the Prudential Center, where it’s not enough to feed up to 20,000 people on event nights, the goal is to make each patron feel special.

That’s how Jim Rozes describes it.

“We really do listen,” he said. “We are a big part of the experience here. We want to satisfy.”

Rozes is vice president of operations for Legends, the arena’s hospitality partner. There are 400 team members devoted to the mission, he said.

Employees such as Michael Toussaint, the executive director of concessions.

Fans, he said, are the reason there are 24 premium wine selections now available at The Wine Bar (Section 4, main concourse).

Most of the selections are available by the glass ($13 to $18), but four, including two cabernets (Jordan, Hall), a chardonnay (Cakebread) and a champagne (Moet & Chandon Imperial) are available only by the bottle ($160-$187).

It may not be what you might expect at a hockey game, but Toussaint said it is what is wanted.

“A lot of arenas you go into will have one price point, and it’s usually that house brand price point,” he said. “We wanted to offer a variety of different-tiered pricing, give people the opportunity to buy wine by the bottle as well as by the glass, but also to enjoy some of those higher-end glasses that they might enjoy at home or at their local steakhouse.”

The customers, Toussaint said, asked for the opportunity.

“We got the request in last season in one of our premium areas,” he said. “We started to introduce some of these wines in those areas and got some really positive feedback, so we wanted to take it away from premium and have it available to the consumer down on the concourse.”

And it’s not just wine. More than 40 local brewers are bringing Jersey beers to the arena, too.

Choate said he knows he needs to raise his game when it comes to the choices he presents to members of the Platinum Club, luxury box holders and the new loge and loft premium seating areas that are being built and figure to be ready by the end of the calendar year.

These ticket-holders have all-inclusive food plans with their seats. Those selections, Choate said, will change out 12 times a year to make sure the regular customers always see new and different items.

Other options, including caprese chicken, shrimp cocktail and crab-cake skewers, were shown.

“We cook from scratch in the arena,” he said. “These are all hand-rolled, hand-made.”

And they won’t be around for long.

“They are here for 40 games, so we can need to offer a little bit of everything and rotate things through,” he said. “The fans only see any given menu about three times during the season.”

Even the event time will dictate the offerings, Choate said. Expect a French Toast and Belgian waffle bar at this Sunday’s matinee game.

Choate also said they watch dietary needs, making sure there are gluten-free and vegetarian options, too.

“We’re really sensitive to everything,” he said. “We want to make sure everyone can come in and have their needs taken care and feel like we’re right there with them.”

Hugh Weber, the president of the Prudential Center and the Devils, said the food plays a large part in the success of the arena.

“We want to make Prudential Center a place that is a destination for amazing experiences,” he said.

“One half of that experience is the warm feeling you get by the greeting from the people who are working here. The other part of it is filling your belly and your mouth and your taste buds and other parts of the sensory experience with our food.”