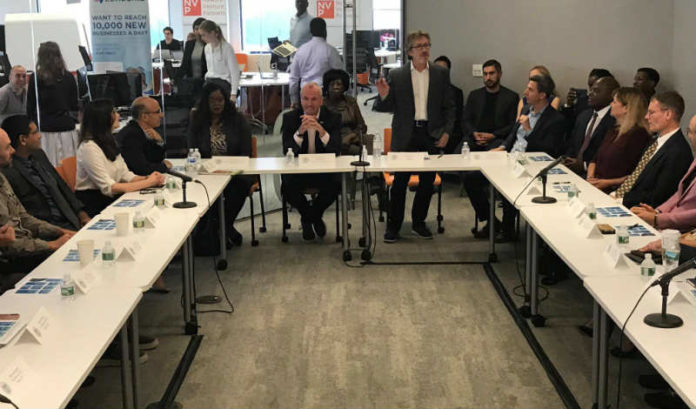 Gov. Phil Murphy met with 25 technology and business officials and leaders from around the state, including the members of Newark Venture Partners, at a roundtable Wednesday in Newark to discuss the innovation economy.

The governor spent time discussing his economic vision for the state, and the proposed venture fund — the New Jersey Innovation Evergreen Fund — that would raise $250 million from auctioning state tax credits, as well as another $250 million from venture capital firms, for startups in the state.

Murphy said the state has turned its back on the startup communities in the past, and changes in the state, including at the Economic Development Authority, will revamp its strategy.

“For all the big incentives we have put out there, we have not solved any riddles,” he said.

James Barrood, president of the New Jersey Tech Council, said the fund is a welcome starting point, but it takes more than a funding commitment.

“We need to fill the pipeline with entrepreneurs,” he said. “Because we can have all the money in the world, but if there is no pipeline, then that money will go elsewhere.”

Others had similar comments about how the governor’s goals will play into the reality of the markets and industries.

Jennifer Velez, an executive vice president of RWJBarnabas Health, said that, for the health care industry, innovation is a tough road ahead.

“With all due respect to the industry I now work in, health care, research notwithstanding, internally we are the least innovative culture, internally,” she said. “To really support that culture in New Jersey, especially in Newark, but statewide, is tremendous.”

“I would make noncompetes illegal in the state of New Jersey,” he said. “Silicon Valley and the West Coast is flourishing with people who leave big companies and start new companies. New Jersey is one of the states where noncompetes actually get enforced.”

Others raised concerns about how the state can help complement the existing venture sector, rather than trying to do as much as a firm, while others suggested the state should go farther by evaluating heavy lifts like the biopharmaceutical sector or earlier-stage startups.

One attendee also pointed out that, in crafting the legislation, Murphy should ask for a commitment to growing in the state, since it would be all too easy for a company to take advantage of the state funding and tax credits and then flee when it is ready to expand.

Murphy said he would keep all the points in mind and anticipates legislation will be in place by the time fiscal year 2019 begins in order to start the fund.