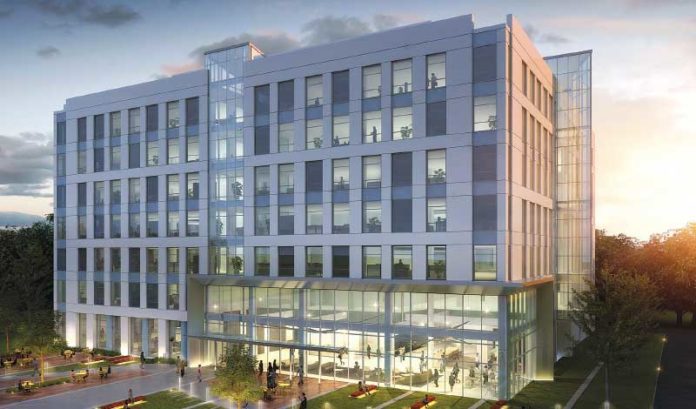 Real estate developer Edwin Cohen has been one of the biggest proponents of unlocking the potential of the state’s aged, sometimes vacant and forgotten suburban megastructures.

“You had something like the (shuttered Hoffmann-La Roche) campus, (it) was a 116-acre site that was gated for many years; no one really knew what stood behind the gates,” he said.

Cohen is now finding success there.

As principal partner at Prism Capital Partners, Cohen is guiding the ON3 project. That’s a massive redevelopment of the former pharmaceutical site on the border of Nutley and Clifton, where Hoffmann-La Roche left a $10 million hole in the local economy when it ceased operations there in 2013.

The project, which aims to restore a missing taxpayer base through its completion, is nearly finished with its $10 million first phase of work, refreshing aspects of the dated structure that Cohen said would cost a fortune to replicate in new construction.

Besides being a practitioner of the redevelopment of New Jersey’s older suburban structures, Cohen’s a purveyor of the oft-referenced “live, work, play” trend in development today, a concept of transplanting urban-like environments to the suburbs.

He thinks the ON3 project is slated to be one of the best examples of that dynamic.

“It’s a trend that people talk about a lot, but often have had a hard time truly creating,” he said. “We had an absolutely ideal piece of property to do that with here. And we had a zeal to make it happen.”

The ON3 redevelopment is located just nine miles from Manhattan on Route 3, which Cohen will remind you didn’t even exist when the structure first was built. It aims to integrate office and research facilities with recreational, hospitality and wellness options.

It was key, Cohen added, to have an overwhelming amount of amenities built into the structure.

“With unemployment at a low number, tenants have to provide substantial amenities to attract new labor,” he said. “That’s what this property has, over and above most in the marketplace.”

Put simply: Developers that don’t seize on the opportunity for creating rich amenities in the suburban zones won’t remain competitive for high-quality tenants in the future, he said.

The ON3 project’s anchor tenant is the combined Hackensack Meridian School of Medicine at Seton Hall University, which will be the state’s first new private medical school in four decades. It has also already signed on the Ralph Lauren Corp. and Quest Diagnostics as tenants, among others.

Others are seeing the same potential at similar sites.

Mountain Development Corp. recently realized an opportunity to bring top-tier tenants into once-aged suburban architecture. Its new 56 at Roseland building, a namesake for the acre count and borough it’s located in, has achieved near-full occupancy with some big industry names.

Last year, it attracted Connell Foley LLP. The law firm, one of the largest in the state, occupied nearly a quarter of the 400,000-square-foot building. It joined another prestigious law firm, Lowenstein Sandler LLP, at the redeveloped Essex County building — another former pharmaceutical campus.

Michael Seeve, president at Woodland Park-based Mountain Development Corp., said the 2017 repositioning of this campus allowed the firm to re-evaluate the sort of environments these tenants are looking for in today’s market.

“You once had this trend of law firms wanting secluded, mahogany spaces where they could speak quietly with clients,” he said. “But, today, they want spaces that are much more open and collaborative. We were able to create that.”

Seeve said there’s a lot of opportunity out there for more up-to-date work environments to be made out of forgotten infrastructure.

“Our approach was to take advantage of the assets this suburban building had, while also updating them in a way that made it exciting for tenants,” he said. “And there’s more of that still that could be done. (New Jersey suburban buildings) have had some the most exciting potential in the hands of a developer with the capital needs to make it happen and the ability to make it happen in a smart way.”

Reach Edwin Cohen of Prism Capital Partners at edwin.cohen@prismpartners.net or 201-567-2711.

Colliers finishes series of deals for CPI Companies in Voorhees