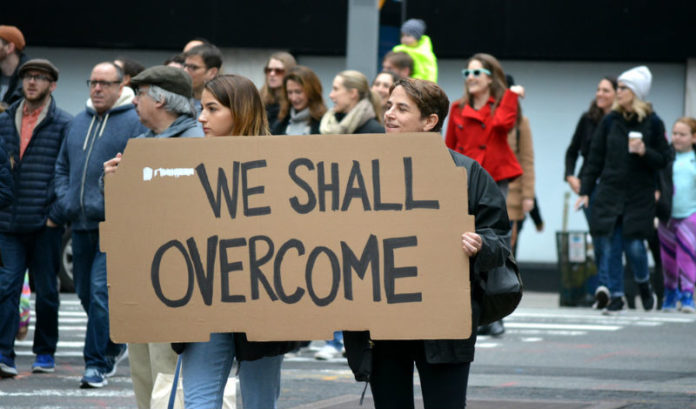 Nearly one year after #MeToo surfaced, women say very little has changed to address sexual harassment in the workplace, according to a new survey released Wednesday by Fairygodboss.

“It is unfortunate that, despite the ongoing conversation to stop incidences of sexual harassment at work that the majority of women feel nothing has changed in 2018,” Georgene Huang, co-founder and CEO of Fairygodboss, said. “You can infer from our data that talk is not translating to action and that we have a lot more work to do to truly improve the workplace for all women.”

Fairygodboss, a New York City-based website that aims to increase transparency and parity in the workforce via job and company reviews for women by the women who work in them, surveyed 502 women in November of last year about sexual harassment in the workplace.

Nancy Erika Smith, an employment lawyer in New Jersey for nearly four decades, said she is not surprised.

“Men are still acting with impunity — (Justice Brett) Kavanaugh is on the Supreme Court!” Smith, co-founder and partner with Smith Mullin in Montclair, said. “But women are energized and angry and tired of being abused, paid less, kept out of power and silenced.

“I think women have changed, but the men who control the world have not.”

A total of 37 percent of women this year told Fairygodboss they have experienced some form of sexual harassment at work. Of those women, 56 percent said they were harassed by a colleague; 36 percent, a boss; 25 percent, a manager; and 14 percent, a client or vendor.

However, just 56 percent of those women reported it, with 68 percent saying they reported the harassment to a manager; 43 percent, to human resources; 12 percent, to a trusted colleague; and just 5 percent to law enforcement.

Nearly 52 percent of women who chose not to report incidents of sexual harassment at work said they did not want to create a fuss, look like a troublemaker or get a bad reputation; 36 percent said reporting it would not result in any action; 42 percent said they feared retribution; and 23 percent said they had feelings of shame or shared blame.

Karen Kessler, best known for her more than 25 years of crisis communication and reputation management in the state, said it was once practice for companies to always reach a settlement with a woman accuser before she departed the company.

“We now see some companies that have had the accused depart, either allowing them to ‘move on’ or ‘retire,’” Kessler, principal and co-founder of Evergreen Partners, a strategic communications firm in Warren, said. “Of course, much of this depends on the accusations, evidence and corporate culture.

“We also have seen more employers who have the accused financially penalized or asked to pay part or all of the settlement.”

More than 60 percent of the women surveyed said companies should create clearer policies to protect victims of sexual harassment and better address perpetrators while also creating an anonymous helpline with which to report incidents.

Nearly 30 percent said it also would help to make it easier to sue by not requiring nondisclosure agreements and signed forced arbitration clauses.

“There is definitely backlash, but journalists are not going away — especially women journalists — and keeping this issue in the spotlight will help us move forward,” Smith said.

Lastly, 70 percent of the women surveyed said #MeToo has not had an impact on their workplace, while just 8 percent said their company had enacted or updated its policies to address sexual harassment.

“This change will take a long time,” Smith said. “But I believe it is inevitable, as we are 50 percent of the world.”