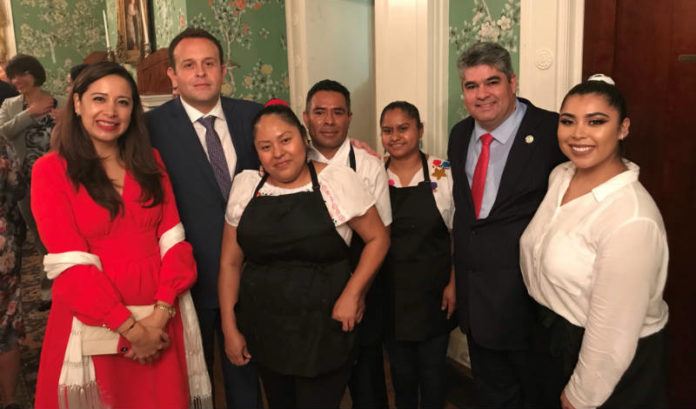 Carlos Medina, the chair of the Statewide Hispanic Chamber of Commerce of New Jersey, knows the value of the organization and its members as well as anyone.

That’s why he wasn’t surprised when more than 900 attendees came to see more than 100 booths at the chamber’s annual gala and expo Friday at the Palisadium in Cliffside Park.

Medina, however, wasn’t surprised by another number: The relatively few banks in attendance.

Only five banks (M&T Bank, Wells Fargo, Kearny Bank, Spencer Savings Bank and BCB Community Bank) got booths at the event. Medina feels as if all the others missed a huge opportunity.

“It’s the fastest-growing business community, leaps and bounds, over any other community in the state,” he said. “And many of them are doing it without banking relationships, which makes that all the more impressive.

“It’s frustrating to try to show the banks the value here. They say they want to deal with small businesses. We have 900 people registered. If you’re not here, you’re not smart — the smart ones are here.”

Cody Hampl, a branch manager at M&T, said he wouldn’t have missed it.

“We are relatively new to New Jersey, so, wherever we can build a base, we’re eager to do so,” he said. “This community is one that has been underserved.

“We are located in a lot of predominately Hispanic areas and we think it’s a great match for M&T and the Hispanic community to grow together.”

She said the bank, which has grown to 30 branches, has not lost the touch it needs to serve the Hispanic community.

“We’re a community bank, but we offer as much as a Bank of America would offer, we’re just community-based,” she said. “We are still able to be one-on-one with our customers, and we think that serves this community.”

To be fair, serving the Hispanic community can be challenging.

Culturally, there has been a reluctance to use traditional or community banks. Instead, many have relied on intra-community lending — or loans from family and friends.

Alex Marin, business development officer and vice president of commercial lending at Spencer Savings Bank, said he knows that from his days at the Small Business Administration and Economic Development Authority, when he was charged with doing Hispanic outreach.

“There’s been a nervousness about using a traditional bank,” he said. “And, if you look back at 2008 and the economic bubble, a lot of Hispanic businesses were hurt by their own people.

“Now, it’s such a perplexity for them: Do I go to a bank or a friend? They don’t trust anyone. It is very imperative for the banks to go out and help these communities.”

That’s what Marin is doing at Spencer.

And what others are doing at Wells Fargo and Kearny.

Chafic Rouhana, vice president, Gateway Region, at Wells Fargo, said the bank has made the Hispanic community a priority. Something it has for years, he said.

“Wells Fargo has been involved in the Hispanic community for decades,” he said. “We know 20 percent of the population of New Jersey is Hispanic and they are the No. 1 minority community when it comes to starting new businesses.

“Our goal is to help them thrive and take them from the initiation of building their business model to opening the door to helping them grow.”

“It’s all about a personal touch,” she said. “You have to get out to events like this, put yourself out there. Our being here, walking around, introducing ourselves, is so important.

“This is a different type of relationship. It’s important for us as a bank to be here and show that we support the community.”

Medina wishes others would catch on.

“We have five banks here today; there should be 25,” he said.

Medina said he’s frustrated that the word isn’t out.

“Even though we have a great bandwidth, it’s still the greatest secret,” he said. “You see service providers here from Israel and India. They’re smart.

“The smart people are here — the other people are just not getting the word or don’t understand the value. The value is here.”

EDA to reopen residential component of ERG program in June