Home Finance Checking it twice: Have you checked your withholdings? Experts warn you should
Facebook
Twitter
Linkedin 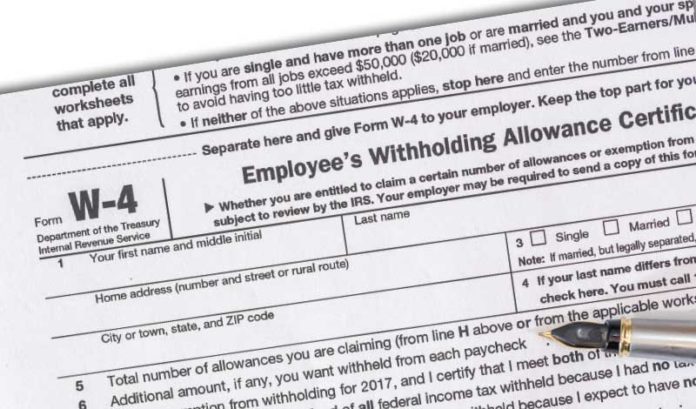 Sticker shock. It’s a phrase accountants hope their clients won’t use when they get their tax bill.

And one they aren’t supposed to get if one believes the name of the Tax Cuts and Jobs Act passed in Congress late last year.

Accountants, however, know that won’t be easy to guarantee. In fact, they say protection against that may only come through making sure personal income tax withholdings are updated.

Here’s the problem: Only about half of local accountants’ clients have actually done that, according to a majority of respondents in a New Jersey Society of Certified Public Accountants survey last month.

Also, according to accountants in the survey, that means a sizable percentage of their clients will owe money next tax season due to underwithholding, a possible result of companies adjusting take-home pay of employees without grasping all of the new law’s implications.

Due to that, the IRS has encouraged two-income families, those with children and those who itemize deductions to double-check that they don’t still have a need to update their W-4 withholdings.

Barbara Taibi, a partner in EisnerAmper LLP’s personal wealth advisory group, said that, while it’s a good practice to review withholdings on personal income, she expects most people wouldn’t owe a significant amount more in taxes because of that.

“This is an issue, but the IRS did adjust the withholding tables, so it’s not like they’ve left everything alone and now you’ve got to figure out where you stand based on the changes,” she said. “If your circumstances are somewhat the same, they’ve anticipated where you’re going to fall out under the new tax act.”

Since many businesses have had the opportunity to revise withholdings to more closely match the new tax obligations, there’s another way of looking at it: The savings taxpayers may anticipate already have been factored into their paycheck, and thus they might be surprised not to find the bonus they may expect to see during the next tax season.

Unless, that is, the person has income coming in from different sources. Employers wouldn’t have taxes on that withheld.

“And that might be the area where the most people are going to get tripped up,” she said.

For wealthy individuals, that means potentially not paying enough for separate investment or pass-through entity income. For the wider populace, side jobs or part-time business income (such as driving for Uber), might set people up for a larger tax bill if they’re making inadequate estimated tax payments.

“Going into (next year’s tax season), there are a lot of pitfalls for people to avoid,” she said. “And we’re already nine months into the year, so there’s only a limited amount of time left to correct issues.”

Of all the advice accountants give to clients as they rush to take advantage of the provisions in the Tax Cuts and Jobs Act, “hurry up and get divorced” has to be the most awkward.

But the new tax law stipulates that any divorces finalized after the year’s end will get a different tax treatment then they do currently. The law reverses who pays taxes on alimony.

“Everyone at any stage of divorce has to look at that,” said Barbara Taibi of EisnerAmper LLP. “At the least, you have to make sure that the agreement is working with the right set of rules, because that’s changing for 2019. In some cases, this is creating a push to speed proceedings along.”

For many decades, the spouse paying the alimony has been allowed to take an income tax deduction for the payment while the recipient was taxed based on that person’s income bracket.

“With no longer having that deduction, the person paying it might not think it they’re getting such a fair deal,” she said. “At the same time, the recipient might want to delay for it to be non-taxable, but also might not think they could come to an agreement if the payment is large. So, this deadline is definitely driving decisions.”

Reach Barbara Taibi of EisnerAmper LLP at: barbara.taibi@eisneramper.com or 732-243-7305.