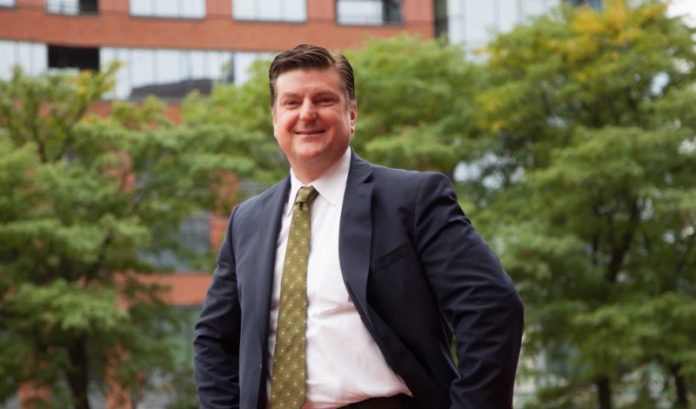 When John Schreiber cut the ribbon on One Theater Square earlier this month, it marked the end of a multiyear quest to bring a new and exciting residential real estate project to Newark.

It also taught him an important lesson about real estate development: There was so much he didn’t know.

When Schreiber looks ahead to the next decade of development around the New Jersey Performing Arts Center — more than 6 acres of parking lots that he plans to transform into a vibrant arts and education community for the city — he’ll do so with an expert hand in economic development at his side.

Tim Lizura, a longtime leader of the state Economic Development Authority — a man connected to all aspects of the real estate industry, from developers, to finance, to government — starts Monday morning in a newly created position at NJPAC: senior vice president of real estate and capital projects.

Lizura, who left the EDA earlier this year, said he weighed a number of options, but kept coming back to NJPAC because it filled his biggest desire better than the others.

“I had a lot of options,” Lizura told ROI-NJ. “But when I kind of whittled them down and made a list of the pros and cons, I decided I still wanted to do something that made a difference. In my whole career, I have been very lucky in that, when I go to work, I don’t necessarily say, ‘My day today is making a couple bucks.’

“My day always has been about making other people’s lives better. I could have gone to do a consulting assignment with a big firm or work for a private developer. I had all those conversations. But, my overarching desire was wanting to continue to do something that’s going to make a difference.

“To join a top-of-class organization like this, learn a whole new industry and have the responsibility of this assignment was terrific.”

The assignment is open-ended.

NJPAC has a vision of what it wants: a vibrant arts community that will further the growth and development of the city.

How it will accomplish that, Schreiber said, is not as easy it sounds.

“Our opportunity is to be a central contributor to the reality of a 24/7 live-work-play destination,” he said. “I’m not going to unveil the master plan because we can’t. It’s not ready.

“Part of Tim’s charge initially is to look at the ideas for these different assets and understand what they cost and whether they’re feasible and practical. The trajectory of this real estate, in my mind, is probably 10 years, maybe 15 years, in order to have a fully developed community on this campus.”

Many options are under consideration, Schreiber said.

“One is a hotel, another is low-rise residential,” he said. “We’re looking at a new education complex that could include a training center, a community center as well as conceivably a public school, where we will build a film center.

“There are a lot of different possibilities. The good news is that NJPAC is a master developer, so anything we green light is going to be part of a larger idea.”

The larger idea is serving the city, Schreiber said.

“That is something that we’re very conscious of,” he said. “We already are in the five wards of Newark with free events and school programs. How and whether our work in real estate expands beyond the 6½ acres currently under consideration is another story, but having Tim Lizura as one’s real estate executive means we will likely be presented with opportunities. And we’re open to that.

“We have all these parking lots and land that we control, and that really gives us a tremendous opportunity to create a very special community and a place that will have benefits for Newark and the patrons of the art center and the state,” he said. “It will really build on the momentum that is Newark at the moment.

“We’re exploring all the options for actual physical development; everything’s on the table. Residential, retail, there’s clearly going to be mixed-use. It’s going to be something that tries to drive a 24/7 environment. We want to be able to create something that has energy, has a real sense of place, that you want to be — and we want to use arts as the lever to do that.”

With NJPAC, it’s always about the arts.

Schreiber made the analogy when he described how hiring Lizura came to be.

“So, adding Tim to our senior leadership feels like the right thing at the right time. What we’ve added is an expert who was also an expert collaborator, and that is at the heart of how we succeed.

“There’s a vision for this campus that includes a variety of uses that we’re thinking about, but we need to bring that vision down to earth. We need to put P&Ls against that vision. We need to understand which of these assets are revenue-producing, which drive mission, which can do both.”

“We’re not a traditional developer in that we’re not obliged to squeeze every dollar out of every inch,” he said. “And yet, real estate, to an extent, is a predictable legacy for an institution that spends 15 percent of its budget for education and community engagement.

“So, how can we be smart, thoughtful and collaborate in advancing the development of this real estate over a period of years? The decisions me make are going to have meaning for us and the city over many generations.

“Who can lead us, who can tell us when we’re tracking correctly, who can help us understand how to get the best deal given the realities of the marketplace, who understands government, understands developers? That’s Tim.”