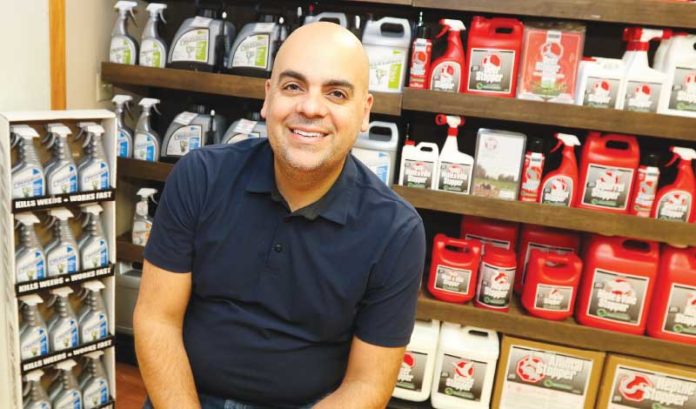 He converted his father’s neighborhood deer repellent business into a full-fledged manufacturing firm producing pest control and plant health products while jumping into the agrochemical sector with both feet.

The move helped the Washington-based, family-owned company, called Messinas, survive and thrive into its next generation of leadership. It also helped lay the groundwork for the potential breakout the company has today.

A few years back, Messina made his second great business decision.

He invested heavily in creating Pulverize, an all-natural product in the weed-killing space.

Today, a few years after the World Health Organization determined that glyphosate, the active ingredient in most weed killers, was labeled a “probable carcinogen” and a year after Monsanto was fined $289 million because a man using its Roundup product got cancer, Messina has the all-natural product consumers — and big-box home-and-garden centers — are looking for.

“A few years ago, I saw the writing on the wall: People would be looking for natural products in the weed-killing space,” Messina said. “Even then, there were early rumblings about a possible cancer connection (with glyphosate).

“My philosophy isn’t on whether or not it’s safe. I don’t know; I’m not a scientist. There is lots of noise on both sides as it regards the safety. But, what is clear is that retailers want products that aren’t a source of debate and anger.”

The company put Pulverize on the shelves of retailers about 18 months ago, adding to its mix of about 130 different products, including animal repellents and plant fertilizers.

The company experienced a year of 120 percent revenue growth on the back of launching a product that outpaced even the largest industry players.

He expects the coming year to be even better.

Calls for Puliverize are coming in at such a fast rate, Messina said, the company may soon need to expand to keep up with the demand.

Messina admits his business wasn’t the first to do a natural weed-killer.

He just feels his is the first company to bring it to market the right way — call it his next great business decision.

Other companies, Messina said, have emphasized how gentle the product’s ingredients are, not how well they work nonetheless at killing weeds.

“It’s like having a bullet manufactured by a soft blanket company,” Messina said. “Our mission was to come out with this as a strong brand, one that already instills confidence that our products can perform.”

It’s part of the reason his product is called Pulverize. He wanted to make it clear that his product was tough enough to do the job.

The business takes a view on branding that’s different from many competitors. Part of that is because it doesn’t cater to millennials. Messina has what some might consider a controversial view on marketing to this growing consumer demographic.

His stern belief is that chasing that market is going after “fool’s gold.”

“Very few 20-somethings are living in homes and gardening actively,” he said. “I know when I was 22, I certainly didn’t have time after long days of work — making a name for myself — to tend to a vegetable garden.

“And, of course, that’s not universal — some millennials do garden, but the vast majority don’t.”

At least on the consumer side — because it does have products for agriculture professionals, too — this manufacturing firm has found a sweet spot in creating products meant to appeal to people looking to increase the property values of their homes. That means they’re after an older crowd.

Messina considers it a gift to not have to keep up with younger consumer group trends as much as other companies. So, you won’t see his business making an appearance on Instagram anytime soon.

“I don’t know how exciting you can be anyways, as a weed-killing company,” he said. “I don’t see us competing with a beautiful sunset in Barcelona with, ‘Look — another dead weed!’ In our industry, things are much more what I’ll call utilitarian.”

There is one part of the millennial mindset that Messina said the company is hoping to capitalize on: The generation’s willingness to reject big brands works in his favor.

And Messinas will take every advantage it can get, as the company, which brings in between $5 million and $10 million annually in revenue, expands here and abroad.

The 24-employee firm, one of the only New Jersey manufacturers left in the agrochemical industry, is working on getting its latest products into the largest retailers in the garden supply space next year.

Messina expects the business to be somewhat insulated from the new online shopping paradigm that has changed so much for retailers and the manufacturers that supply products.

“We have some protection from the e-commerce model,” Messina said. “The benefit for us being that, when you want to plant something on a nice Sunday morning, you don’t want to order a product for later, you’ll go out at buy it at a local store that day.”

But not every one of today’s trends is on its side; the company shares some of the same apprehensions as its fellow manufacturers.

Namely, Messina is concerned about the effect on pricing that tariffs might have on the company’s products. There’s a component used in its packaging process that it sources from overseas — and it’s in the tariff cross-hairs.

“Most of the manufacturers of this component moved out of the country years ago; no one makes it in the U.S.,” Messina said. “And we do try to do all sourcing not only in the U.S., but locally. We have a box company we work with in New Jersey, a label company here and raw materials that we source all from here. But we know we’re not going to be immune to the rising cost of goods.”

On the horizon, however, Messina expects mostly clear skies for the continued growth of his family’s once-minor manufacturing operation.

“The best part for me is that, despite how long we’ve been here, you have people who have never heard of us now discovering our products,” he said. “And it’s fun to be a 20-year, overnight success story.”

A plant is a plant; James Messina doesn’t differentiate.

So, when he looks at cannabis, he sees equal potential as any other crop for his company’s plant food to be of use.

There has been a recent pouring of investment dollars into lawn and garden companies, such as Scotts Miracle-Gro, that have specifically targeted the growing operations involved in emerging cannabis markets.

Messina expects it will become more standardized in the industry as time goes on.

“What I see happening across the country as recreational cannabis has had more time to percolate is that folks growing these valuable crops are becoming less interested in brands and more interested in the underlying quality when they need certain micronutrients,” he said. “It’s transforming from a craft into a typical agricultural system.”