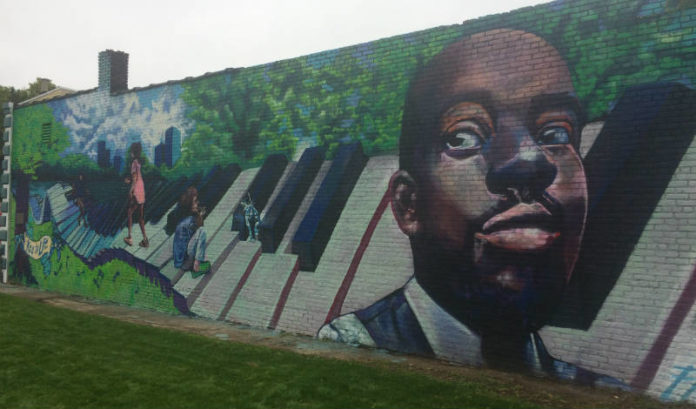 Across the street from small, family-owned businesses on Central Avenue in Newark — and on the side of a ThriftWorks building that the Urban League of Essex County uses to serve the West Ward’s Fairmount neighborhood — is a 20-foot mural of Wyclef Jean.

Jean, a three-time Grammy Award winner also known for his philanthropic efforts in his native Haiti, spent many of his formative years in Newark.

The mural is meant to serve as inspiration to the community about how far a native son can go. But when Jean saw it for the first time Monday afternoon, he told the gathered crowd of more than 50 that the image should be seen as a symbol of the city, not him.

“When you see my face on that, it’s not (mine),” he told the crowd of students, residents and community leaders. “It’s y’alls face on that mural, and it’ll continue to be y’alls face forever.”

The mural, created by urban street artist Camille Cote, is the first of five that will be created in a program sponsored by Prudential Financial and the Grammy Museum Experience at the Prudential Center in conjunction with Yendor Productions, an arts organization based in Newark.

The Newark Murals series is meant to promote art education and creativity among Newark’s youth, as well as shedding light upon Newark’s colorful musical history.

Unbeknownst to some, Newark has a long history of jazz as well as numerous pop stars, including Whitney Houston and Gloria Gaynor.

Newark Mayor Ras Baraka emphasized how art was key to development of all kinds in the city, particularly economic development.

“Art is essential to growth, to economic growth, to social growth, to community growth,” he told ROI-NJ. “Without art, we don’t have community.

“(Art) inspires people, brings people together socially. It’s an economic tool, drives walking traffic in neighborhoods, allows people to go into the stores (of) their communities. Art has a revitalizing characteristic that helps move cities forward.”

Vivian Cox, CEO and president of the Urban League of Essex County, said the mural placement was planned.

“Newark is a city of many talents,” she said. “It is Prudential’s best investment.”

Officials from the Urban League, which is celebrating its 100th year of conducting employment opportunity programs, education and young adult programs, to name a few of its efforts, gave credit to Yendor.

Jean was happy so many people and organizations were coming together to help the youth of the city.

It was this type of help, he said, that helped him grow into the artist he is today.

Jean, who graduated from Vailsburg High School, said he credits Newark for much of his development.

“If it were not for Vailsburg High School and my teachers, I would not be standing here today,” he said, before giving a shout out, by name, to the music teachers and basketball coach that kept him focused on harnessing his talents.

It’s why, after the reading of many of his accomplishments, Jean interjected, “and I’m from Newark.”

Throughout the event, Jean continually shifted the focus of the celebration to the city’s residents.

“This mural isn’t just for me,” he said. “It’s for the new generation.”

It’s all part of a plan, he said, to raise the spirit of the city.

“So many negative stories come out of these communities that we need to glorify the positive ones,” he said.

It’s why, when young people look at the mural, he hopes they see more than just him. He wants them to see themselves, to see what they can become and to see Newark in a new light.

Jean said he does that himself.

“When I see a mural of Bob Marley, I see culture, I see the struggle,” he said.

Online and retail sportsbooks attracted more than $1 billion for 4th...