Home Politics Frequent question for Murphy on Day One abroad: Are you running for...
Facebook
Twitter
Linkedin 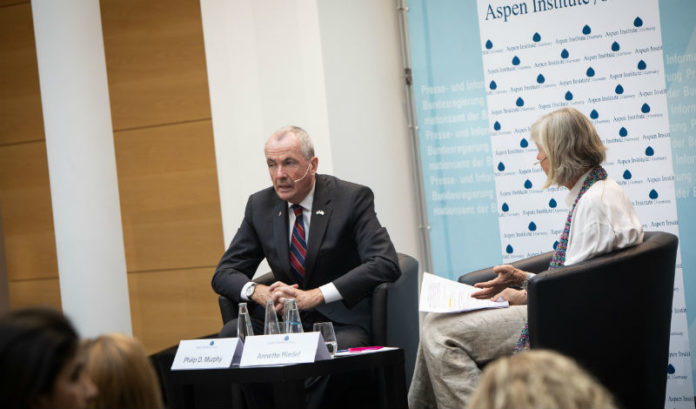 Political pundits in the Garden State are convinced he is. And the question followed him to Germany on Tuesday, the first day of his nine-day trip to Germany and Israel.

The trip, which has an aggressive agenda aimed at opening New Jersey promotional offices worldwide and fostering relationships with various countries and markets, had some wondering if the governor fancies himself a future secretary of state.

Murphy again emphatically denied he has interest in higher office.

That, he said, goes for all other jobs.

“There is no other hidden government job that I’m not talking about,” he said. “Part of the reason, I think, why there is a disconnect between people saying that — and, by the way, I do think people say that over here because they are so exasperated by the current situation — (is because I) believe so strongly that the New Jersey economy has been so dramatically undermanaged.

“I don’t think people see the opportunity that we have in front of us in the way I do.”

Prior to his trip to Germany, Murphy penned an article in the October issue of The German Times, where he reinforced the discord that is happening as a result of President Donald Trump’s trade strategy.

“The United States, long the defender of stability and order in the world, is proving it is not immune to insular, self-centered policies and politics,” Murphy wrote. “My ambassadorship was steeped in this fundamental understanding of America’s important role in the world, and our deep and abiding ties to countries like Germany. Now, we have a president who speaks proudly of his desires for legal and physical walls that will close our nation to peoples based on religion and nationality.

In Berlin, Murphy spent the day Tuesday repeatedly answering questions about the midterm elections, Trump’s trade polices and what sanctions on Russia — with which Germany has strong economic ties — will look like after the elections.

“I’m not really living with Nord Stream 2 sanction-related topics these days,” he said of the underwater natural gas pipeline that would connect Germany and Russia.

“I have no problem opining and giving my views on the general environment, including the midterm elections, what I know we did with sanctions and how I believe Russia would be treated with a different congressional makeup.

“I think (Russia) will be treated much more harshly than this (Congress), there’s no doubt in my mind. But having said that, I’ve got to come back to the fact that I’m here to get jobs and investment in New Jersey.”

It’s not revenue, it’s relationships: Why Murphy’s legacy is tied to...