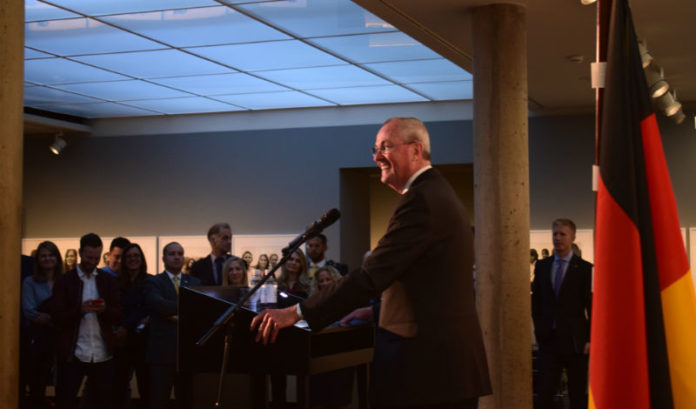 For the first time since 2012, New Jersey’s flag is planted in Europe to signal the state is open for business.

Nicola Michels, formerly with German American Chamber of Commerce in New York, will lead the office as its managing director.

Michels, who has been working in Germany for the past three months to get the office off the ground, feels her outreach already has had impact. And she feels Murphy’s name had a lot to do with that.

“I spoke to so many people, and whenever I mentioned the name Phil Murphy, first of all, doors were thrown wide open, and, second of all, so many fond memories came up,” she said.

Choose New Jersey has seen a doubling of calls from companies interested in moving to the state, Choose officials said Tuesday.

So far, it has only led to commitments, but Murphy is confident it will eventually lead to a stronger business connection.

That has been a goal for Murphy since he was elected.

“As ambassador, I hosted numerous state delegations which came here to further their economic ties with German ties,” he said. “Sadly, none of them were from New Jersey.

“That made no sense to me. I know how important a trading partner Germany was for our state. It’s a relationship that’s valued at nearly $8 billion of economic activity, which creates 25,000 jobs directly in New Jersey. I often wondered why more wasn’t being done to foster greater trade and business collaboration.”

Throughout his first economic trip — to Germany and Israel for the next week and a half — Murphy intends to establish relationships and announce agreements to foster more economic growth between the state and those regions.

Murphy addressed a crowd of 60 Tuesday morning at Amerika Haus — an institution in Berlin that was first used as the center for West Berliners to build up a resistance to East Berlin. It later became an institute for German citizens to learn about American culture and politics.

Murphy said it was important for the state to have a presence in the region, and especially in Germany.

The goal, eventually, is to open more offices in more markets around the world, and eventually transition the leadership from Choose to the state — possibly as part of the Economic Development Authority.

Ralph LaRossa, chairman of Choose and an executive with Public Service Enterprise Group who also made the trip, said the office is like a pop-up museum or shop.

“The same reason there are pop-up stores in malls, this the way for New Jersey to have a pop-up (office) in Europe,” LaRossa said.

“This gives us a footprint, and, if we get this right, we turn it over to the state.”

Murphy has previously said his focus for the state’s economy leans largely on innovation, to re-establish New Jersey’s prominence in the sector.

In Berlin, there is a similar pursuit.

Christian Rickerts, a senator in Berlin, said the city was the startup center of the world prior to World War I, and is looking to re-establish itself as such.

Jose Lozano, president of Choose New Jersey, told ROI-NJ that, even though the office is in Berlin, the office will foster relationships throughout Europe.

“There’s an operational benefit to have someone here who is able to interact with companies on a daily basis, answer questions and visit companies,” he said. “For me, it’s an extension of the team that’s already in New Jersey.”

New Jersey last had offices in Europe in 2012. The state had an international business department that existed under Govs. Christie Whitman, Jim McGreevey and Jon Corzine, under the Department of Commerce. Corzine folded that department and the responsibilities moved under the State Department.

Community of caring: Why Plainfield is paying $1.1M to keep water...