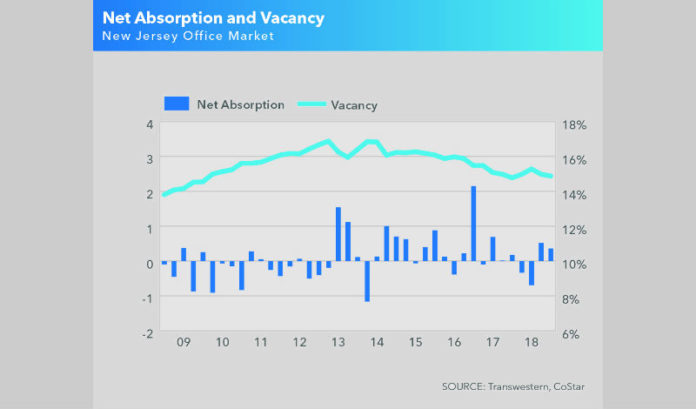 Big renewals and expansions in the suburbs led to improved vacancy levels and asking rents to go up in the third quarter for New Jersey’s office market, according to Transwestern‘s Third-Quarter 2018 Office Market Report.

The vacancy rate improved (15 to 14.9 percent) quarter-to-quarter, which is below the average of 15.7 percent over the past five years.

About two-thirds of the state’s submarkets had positive absorption both in the third quarter and year-over-year, with Bergen and Morris counties in North Jersey and Middlesex County in Central Jersey setting the pace.

“Owners are being more creative with their assets and, as a result, we’ve seen several success stories, including Exeter Property Group’s renovation of 700 Route 202/206 in Bridgewater and USI Insurance’s relocation to 180 Park Ave. in Florham Park, which is being modernized by Hudson Advisors,” James Postell, partner and city leader in Transwestern’s New Jersey office, said. “Some of these suburban office properties are morphing into live-work-play destinations, while other sites are being repurposed to boost their appeal to a millennial workforce.”

The life sciences sector was responsible for nearly 700,000 square feet of leasing activity in the quarter, including Insmed’s new lease at 700 Route 202/206 and Teva Pharmaceuticals situating its new U.S. headquarters with 345,000 square feet in Parsippany.

Financial services firms were responsible for about 600,000 square feet in the quarter, including E-Trade’s 132,000 expansion in Jersey City with the help of $20 million in state incentives.

“With downtown migration dominating in previous years, suburban population growth has now returned,”Matthew Dolly, research director in Transwestern’s New Jersey office, said. “This new demographic trend is likely contributing to the recent surge in suburban office market activity. Along with that, the growing adoption of technology by office tenants is allowing for expanded geographic parameters, which also seems to be helping suburban markets.”