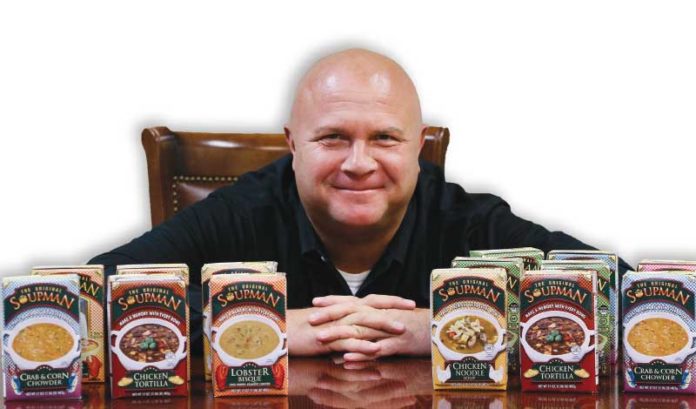 Joseph Hagan is not a “Soup Nazi.”

He admits that he demands perfection from both himself and his company’s product. But the company he now runs — yes, the same one made famous when it served as inspiration for a “Seinfeld” episode — doesn’t deny anyone soup.

“While the catchphrase was a very funny and popular part of American culture, it was not a great business model,” Hagan said. “In fact, there was never enough soup to sell.”

Hagan, CEO and president of Gallant Brands in Eatontown — now the parent company of the former New York City-based The Original Soupman — officially has changed the business’ mantra from “No Soup for You!” to “Soup for All!” after purchasing company assets in September of last year.

Hagan said that, with a bit more openness and a lot more marketing, he believes The Original Soupman will become a $50 million company over the next couple of years, as well as a large supporter and employer of veterans.

“We can provide work opportunities that disciplined and respectful veterans returning home are well-suited for,” he said.

The Original Soupman became a restaurant chain and manufacturer of soups after Chef Ali “Al” Yeganeh opened his original restaurant, Soup Kitchen International, in Manhattan in 1984.

It was made popular after Yeganeh served as inspiration for “Seinfeld” writer Michael Donovan “Spike” Feresten Jr., who created the fictional “Soup Nazi,” a tyrannical yet popular purveyor of soups portrayed by Larry Thomas, for a single episode in 1995.

“Still, the company never could break through the $3 million barrier,” Hagan said.

Long-term investors, including Hagan, were unhappy with the way management had continued to mishandle finances, he said.

“They made a lot of well-documented missteps as a publicly traded company,” he added.

Hagan, who worked in wealth management and in private equity investments, said he worked with The Original Soupman on and off for nearly a decade to help bring in investors, go public and manage investor relations.

“I also personally worked with the company to help them take their burdensome debt from $12 million to $5 million,” he said.

However, with the company once again taking on toxic debt by 2016, Hagan and several other investors brought in Jamie Karson, previously the head of Steven Madden, to be the new CEO.

“He ended up making many of the same mistakes — only in an expedited fashion,” he said.

While much of the continued borrowing was blamed on Robert Bertrand, the former chief financial officer convicted of tax evasion in 2017, Hagan said things continued not to feel right.

When he and the other investors sought to remove current management altogether, they threw the company into bankruptcy — but the tactic did not work.

“Gallant Brands was formed just over a year ago in order to purchase The Original Soupman,” Hagan said.

That left Hagan in charge — and ready to move forward.

“We are looking now to take this iconic brand that we all have invested in over the years and help it mature into an iconic company,” he said.

A six-pack of The Original Soupman soups — including flavors such as jambalaya, lobster bisque, chicken gumbo, crab and corn chowder, shrimp bisque, lentil, and chicken noodle — currently retails online between $15 and $25, depending on the flavor, and sits on more than 6,000 grocery stores’ shelves, such as ShopRite and Wegmans, around the world.

But Hagan said he has even bigger plans for the company, which currently employs 25.

“For example, we are in the process now of purchasing a company in New York City with a manufacturing plant and distributor,” he said.

The idea, Hagan added, is to become a completely vertical company, with the brand, sales, production and distribution all located within the tri-state area.

“We want to be able to control our own destiny by being close enough to stop by,” he said.

While the new company will now primarily be producing and distributing The Original Soupman products, Hagan said, the company also currently produces refried and pinto beans, which has helped Gallant Brands repair and restore prior relationships with the New York City school system.

“The beans are used as side dishes and in veggie tacos on the school menu,” he said. “We also would love to be able to bring our soups and side dishes to New Jersey schools, as well.”

The purchase also has helped Gallant Brands move production from the Midwest to a facility closer to the produce, meat and fish markets in the Bronx, resulting in better profit margins and more quality control, Hagan said.

“All of the fresh soup that we make for our franchise locations and schools, as well as for the grab-and-go section within supermarkets and delis, that all will now be made in the Bronx,” he said.

Hagan, who is making all these changes in real time, said much has happened over the last year in order to scale the company.

“But even with all of this happening, we still grew 50 percent with a business that had been neglected and left in shambles,” Hagan said. “The reality is that we will do at least three to four times what their record revenue was in only our first year.”

This September, he said, marks the first full “soup season” in which he and his team will be running the company.

“We’ve prepared for this all summer long,” Hagan said. “We’ve run promotions in grocery stores; we filmed three commercials in Asbury Park with Larry Thomas; and we’ve loaded up on inventory.

“It has been very challenging, but we have come a long way in a year and can’t wait to see what’s next in store.”

Joseph Hagan, CEO and president of Gallant Brands, is determined to use The Original Soupman to help veterans.

“It is important that we do well in business, because the more quickly and successfully we can scale, the more we can give back to and employ more veterans,” he said.

It’s one of the reasons he wants to open franchises in New Jersey (where he currently has one location in Atlantic City) as well as New York and Connecticut.

“We also have an idea to help veterans own their own business,” Hagan added.

The plan, Hagan said, is to employ veterans as operators of The Original Soupman food trucks soon to come.

“Cost is not as high a barrier to entry and, as much as it is a great way to help veterans move forward, it also will help make our business more profitable,” he said.

Hagan said The Original Soupman helps veterans in another way, too.

The company could not always fill orders in a timely fashion prior to Gallant Brands purchasing it.

“Now, we make sure we always have ample inventory,” Hagan said.

Sometimes, however, that results in excess inventory with impending expiration dates.

“Liquidators might purchase that sort of inventory at a discount, but I decided I would rather help veterans out,” he said.

The Original Soupman founded the not-for-profit Soup for Troops foundation to both donate soups and raise money for veterans in need.

After connecting with the Nutley Department of Public Affairs’ Military and Veterans Affairs Bureau, The Original Soupman has been able to have veterans bring soup to local veterans in need and their families.

“It is a warm ‘thank you’ to veterans for their service and sacrifices,” Hagan said.

Hagan also took the idea one step further by selling commemorative T-shirts for $24.95, with one sale providing one dozen meals for a veteran and his or her family.

“Soup can be cyclical as we move inventory, so proceeds from our T-shirt sales help us to be able to donate current inventory as well,” he said.

Outside of Soup for Troops, The Original Soupman also has donated to many other community organizations, including Toni’s Kitchen in Montclair, City Harvest and Holy Apostle Soup Kitchen in New York City, and Precinct 75 of the New York City Police Department in Brooklyn.

Reach The Original Soupman at: thechef@originalsoupman.com.