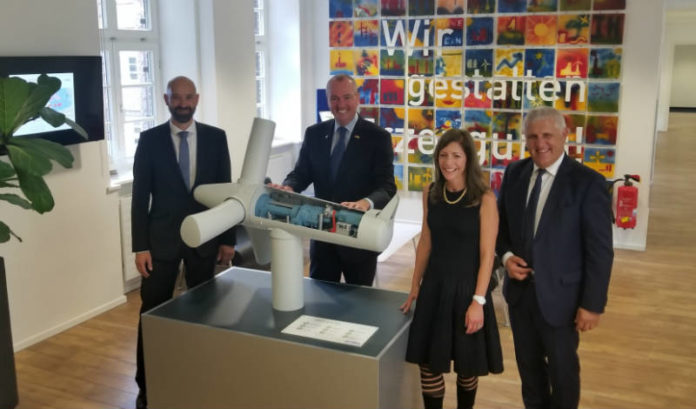 Three takeaways from Day Two of Gov. Phil Murphy’s nine-day trade mission trip to Germany and Israel. Wednesday, the governor was in Hamburg and Berlin.

EnergieBW, a Hamburg-based wind energy company, had real estate and company officials on the ground Wednesday in Jersey City, scouting locations for its U.S. office. The $25 billion company will be opening an office there.

Ørsted, a Danish wind energy company, is in talks to merge with Deepwater Wind. Both companies currently are operating in New Jersey. Deepwater is currently partnering with Public Service Enterprise Group on offshore wind energy leases off the coast of southern New Jersey. Volker Malmen, managing director of Ørsted in Germany, said the company is now one of the largest wind energy players in the U.S. “The deal is not closed yet,” he said. “I cannot comment. We are both very strong partners, strong companies, and we ideally fit together. And it makes us even stronger, both parties, so we can realize the project.”

Germans are very aware of the offshore wind energy momentum on the Eastern seaboard, but most focus on Massachusetts. Gov. Phil Murphy said the Bay State may have the lead now, but New Jersey can catch up. “We are behind, in the innovation economy … but we have everything, we believe, at our disposal to catch up. Massachusetts has done a particularly good job of that. In offshore wind, no, they may be ahead of us, at this moment, technically, given what their exact projects look like, but I don’t think anybody will be ahead of us, including Massachusetts, in offshore wind. I’m confident of that. We have not missed that boat.”

‘We have to put partisanship aside, because nobody wants N.J. to...