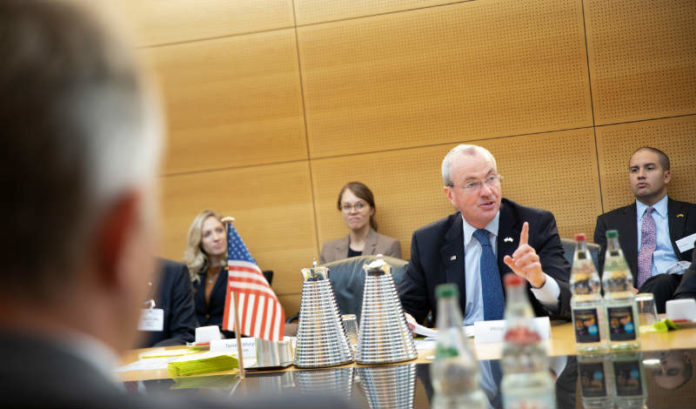 Gov. Phil Murphy understands the desire to gather more information on how sexual allegations against an administrative aide were handled, and on how the state can improve policies to handle such issues in the future.

Murphy, himself, called for this Monday, before leaving for Germany on a nine-day trade mission.

But, during a stop Wednesday afternoon in Berlin, Murphy said he hoped the Legislature’s interest in the sexual assault allegation would not prevent it from doing other business, including introducing a bill to legalize marijuana by the Oct. 29 deadline set by Senate President Steve Sweeney (D-West Deptford).

“If the objective is to make the whole of government … and our state more broadly, a better place for survivors of awful sexual assault, I can’t think of a higher calling right now, or a higher priority,” Murphy said.

“So, it’s hard for me to say, ‘Gosh, it derailed X or Y.’ I would hope. … I do believe we can both do an investigation, review our policies and the attorney general can figure out a better environment in New Jersey, at the same time I’m in Germany trying to grow the economy and get jobs.’

“So, I would hope that we can multitask, but it can’t be at the expense of this. It’s too important.”

The sexual assault allegation came to the forefront Sunday, when a Wall Street Journal article detailed allegations of assault by Katie Brennan, chief of staff at the New Jersey Housing and Mortgage Finance Agency, against Al Alvarez, a former campaign staffer who later became chief of staff in the Schools Development Authority.

The Legislature has taken interest in the case this week. On Wednesday, Sweeney announced that Michael Critchley will serve as counsel to the Select Committee on Investigation — the bipartisan legislative committee that will be investigating the sexual assault allegations.

Critchley heads his law firm, Critchley, Kinum & DeNoia, and was a key defense attorney in the Bridgegate trial and, more recently, was hired by South Jersey Democratic power broker George Norcross when a published report revealed Norcross’ phones had been wiretapped by federal agents.

“Michael Critchley possesses the experience and the skills needed to guide an effective investigation that gets a full accounting of the sexual assault allegations by Ms. Brennan, the government’s hiring practices and any systemic failures that deny survivors the justice they deserve,” Sweeney said.

“Mr. Critchley knows the law, understands government and has a relentless determination to get the truth. This will be a fair and thorough investigation that will produce findings that can be used to prevent the failures that Ms. Brennan endured from happening to other sexual assault survivors.”

Meanwhile, there have been concerns about former state Supreme Court Justice Peter Verniero, who currently works at Sills Cummis & Gross P.C., who will be handling the investigation for the administration.

Murphy addressed those concerns on Wednesday in Berlin.

“That obviously bothers me, but … he also has a very deep career,” he said. “Chief counsel, chief of staff, Supreme Court justice, attorney general — and he does this sort of stuff and he has done a lot of it.

“Listen, you’re asking a guy who cares deeply about diversity and was on the board of the NAACP, so I don’t take that part lightly. I am comfortable, notwithstanding that, (with) the assignment at hand.”

Election 2021: Voters were ready to think differently, but did anyone...