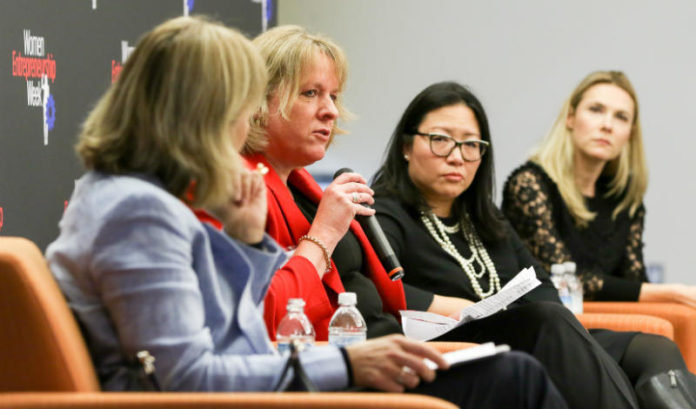 Montclair State University created the Presidential Scholars Program this year to give accomplished students not only the challenge of unique academic and career preparation opportunities, but the added support of a $5,000 annual scholarship, Susan Cole said.

“We want to keep the most talented people in New Jersey,” Cole, president of the college, said. “And I am excited to say that, out of 343 Presidential Scholars in our entering freshman class this year, almost 80 percent of them are women.”

Cole spoke at MSU’s fifth annual Women Entrepreneurship Week conference, originally created by the Feliciano Center for Entrepreneurship at MSU and now celebrated at more than 160 universities and colleges in 32 countries and 46 states.

The conference kicked off rather unusually, however, with a panel of successful women leaders working instead in Corporate America.

It was moderated by Kelley Holland, a former business journalist and financial analyst turned entrepreneur as founder of Own Your Destiny, a financial consultancy designed specifically for women. Panelists described how they have used their entrepreneurial and creative spirits to help cultivate innovation within larger companies.

Collectively, they came to the decision that diversity of culture, thought and experience is truly what drives great ideas forward.

“I come from Finland and have lived in Sweden, the United Kingdom, Spain, Austria and Germany,” Emma Aer said.

“And I think entrepreneurship is much more valued in the U.S. than in the European countries in which I have lived,” she said. “The dream of the self-made woman or man is much more alive here, in my experience, and it helps that the U.S. is a melting pot of people from all over the world.”

Pearl Pugh, vice president and global commercial leader for rheumatology and dermatology at Johnson & Johnson, said she also has traveled the world to set strategies and collaborate with different regions on the treatment of immunological diseases.

Sweden and Singapore stood out for her in particular, she added.

“There was actual government sponsorship around innovation in those countries, in which government agencies would dole out grants to entrepreneurs that would ultimately benefit the gross domestic product of those countries later on,” Pugh said.

Pugh added how, within various companies in multiple countries, she was consistently struck by the eclectic diversity of talent.

“You always will have a base of workers from your home country, but, increasingly, workers are taking international assignments, too, to help facilitate and foster innovation,” she said.

Carley Graham Garcia, the head of external affairs at Google responsible for public policy, government relations and community engagement for the New York City region, said her company also pays particular focus to the diversity of thought amongst its nearly 8,000 regional employees.

“Some of you may have heard about our ’20 percent time,’ which is that 20 percent of each employee’s time is meant to explore projects outside of their core job functions,” she said. “Every job I have had at Google in the nearly 12 years I have worked for the company has come through my ’20 percent time.’”

Kim Hanemann, senior vice president of electric transmission and distribution at Public Service Electric & Gas, said she herself implemented an engineer rotation program within her organization to produce similar results.

“I think it is important that people, especially early on in their career, move around, learn different elements of the business and be open to more lateral assignments that will help them to grow and make them more valuable to the business overall,” she said.

“I spent my first eight years becoming a technical expert in gas operations before I had the opportunity to move over to electric,” she said. “I struggled with electrical engineering in college, but I grew the most as a manager and a leader outside of my comfort zone because I could no longer rely on myself to answer the most technical questions.

“I not only had to learn how to build a team in which I could rely on for support, but also how to ask the right questions.”

For example, she was given the task of reducing the number of days it took to put a contract in place from 180 to 60 to improve project scheduling.

“How do you do that?” Hanemann said. “Well, you hire a diverse team, put them up to the challenge, help them to create a vision on their own and let them execute it well before you communicate and build off those successes.”

And build she did, Hanemann said, as she recalled volunteering to execute a large infrastructure program of transmission projects nearly 10 years ago.

“I got the opportunity to build a startup company within a regulated utility,” she said. “We started with about 40 people and are now at about 1,000. We started with $100 million per year in capital infrastructure projects and are now managing between $1.5 and $1.8 billion worth per year.

“All it took was a little resilience, persistence and the know-how to set goals.”