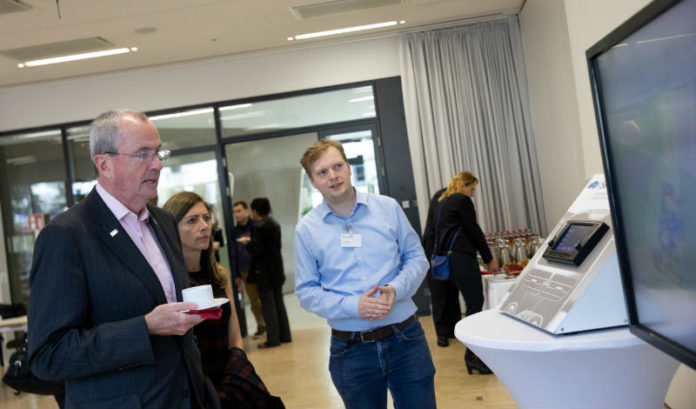 Three takeaways from Day Three of Gov. Phil Murphy’s nine-day trade mission trip to Germany and Israel. Thursday, the governor was in Frankfurt.

Murphy has said he backed the enormous Amazon tax incentive package, which, between the state and Newark, totals $7 billion. Simultaneously, he has spent the last few days in Germany spreading word about the startup fund and rent assistance programs that were recently introduced as programs under the Economic Development Authority. When asked about taxes and tax incentives at a business luncheon, Murphy said Amazon was a different situation.

The HQ2 opportunity represents, at minimum, a $5 billion investment and 50,000 jobs.

“That is of a scale that has never been seen before in economic commercial history. So, what you’re willing is to do for that singular opportunity is probably disconnected — and it is, in my case, in fact — with any other policy as it relates to the weapon of tax incentives,” Murphy said. “Putting Amazon (HQ2) aside for a moment … as a general matter of tax incentives, we have been playing the old game … chasing the old economy. We are good with the old economy, we want the old economy to be with us.”

Murphy has spent a lot of time discussing national politics while in Germany. He often answers questions about the elections or President Donald Trump’s policies, and has on some occasions broached the topic on his own. If he’s on a trip to promote New Jersey, why is he talking about Trump?

“This is as sharp a non-U.S. audience as you’d find outside of a Canada or Mexico,” he said. “They know me, they know I was the finance chair for the party, that I raised a lot of the money that got Barack Obama elected, that I worked for him, that I’m a Democrat, that I’m a governor. I was expecting it. I was pleasantly surprised … the balance of Jersey/non-Jersey is actually better than I thought it would be.”

What is the innovation economy Murphy keeps talking about? It’s a question many ask us at ROI-NJ. Is it STEM fields? Yes, but it’s more — it includes some traditional sectors. In Frankfurt, Joe Kelly, deputy chief of staff for economic growth in Murphy’s office, finally provided a list of sectors that fall under the governor’s focus of the innovation economy.

There’s also one more. Sort of. The much-debated cannabis industry.

Cannabis, “though it doesn’t need much ‘gardening,'” represents an innovation opportunity in the context of its medical use and how that relates to the pharma and life sciences sector, Kelly said.

Murphy’s motor vehicle misstep: Will it be 1-day problem or ongoing...