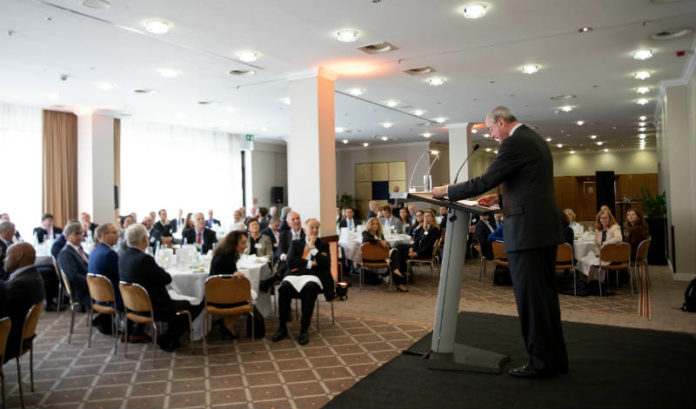 German-American relations are at the lowest point they have been since World War II.

That was the underlying theme of a business luncheon hosted by the American Chamber of Commerce on Thursday in Germany.

And one Gov. Phil Murphy, on the third day of a nine-day economic trip through Germany and Israel, said is apparent when he reads clippings from German news services.

“You get a sense of despair about the TransAtlantic relationship,” he said. “Germans really, intently, study and care about the United States.”

Murphy started Thursday in Frankfurt, touring an incubator, Tech Quartier, and spoke to a room of German business leaders.

The recurring theme was the faltering relations at the federal level for both countries, followed by optimism that there will be a way to work around the political issues.

The real topic of business in today’s world is not “where do you get what business,” he said.

“The 21st century will be the century of cities and metropolitan areas. There’s no sense to stop it,” Schafer said. “Even if we have some miles between us, starting a tough fight between European capitals, that’s like starting a knife fight in a telephone booth, it’s completely senseless. Don’t do it. We will all interact and we will all profit from each other. And all these processes are not one way, they are bidirectional.”

New Jersey has started to embrace a similar mentality, breaking down innovation sector hubs among the various regions of the state — rather than fighting for one innovation capital in the state.

An emerging power player in that space is the New Jersey Institute of Technology, which has spread from its hub in Newark to other parts of the state, including recently to lead the aviation tech park in Atlantic County.

On Thursday, CEO Joel Bloom was in China, pitching a new venture, Murphy told the crowd at Tech Quartier.

Later Thursday, a five-year memorandum of understanding to start a collaborative relationship between Fraunhofer-Institut fur Sichere Informationstechologie and NJIT was signed.

The collaboration agreement was crafted to “intensify mutual cooperation in Innovation” through joint research and information sharing, exchanging scholarly publications and research, providing exchanges and fellowships for personnel of both entities, and potentially bringing in more partners for greater collaboration as appropriate.

Murphy said he hopes the MOU eventually expands to include Rutgers University.

SIT already has research partnerships, focused on cybersecurity and digital business, with three academic centers around the world.

They include: Technische Universitat Darmstadt, the Hebrew University of Jerusalem and Nanyang Technology University in Singapore.

When asked by reporters about the significance of this relationship, Murphy said it boosts the state’s potential for cultivating a strong innovation economy.

Of the sectors that are included in that, Murphy said life sciences, cybersecurity and wind energy hold the best potential for the state to be a leader.

“For the cyber piece, you’re either in Washington (D.C.) or you’re near, you’re in the corridor,” he said.

With all the intelligence agencies based in or around the U.S. capital, New Jersey’s strategic location presents an opportunity, Murphy said.

“Someone in that corridor is going to dominate,” he said. “We underplay ours.”

For life sciences, a sector in which New Jersey has lost some ground in recent years, the governor believes there is still a chance to regain the state’s clout.

“We’ve ignored it,” he said. “I don’t know that we’ll bring back what went (to Massachusetts), but we stopped birthing companies.”

Creating networks within sectors through public-private partnerships will be key to that, he said.