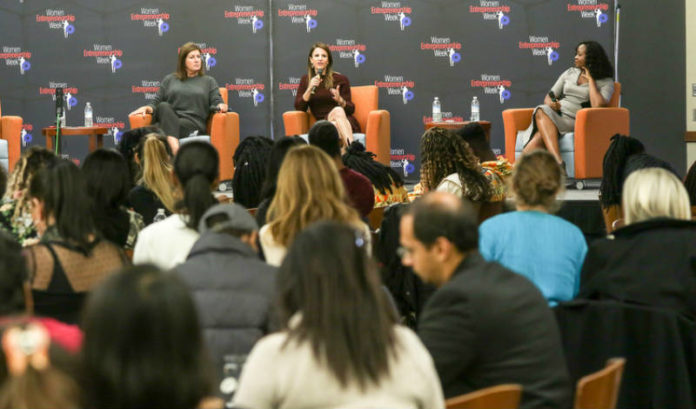 Why? Because she and two of her fellow panelists were talking money — and how to get it — at the Feliciano Center for Entrepreneurship.

“If you have an idea, or if you are a new entrepreneur about a year or two into your business, that is when you come to iFundWomen,” Cahn, founder and CEO of iFundWomen in New York City, said. “We help you perfect your pitch, get your branding game on point and prepare you to successfully raise funding from a crowd made up of your friends and family, your personal and professional networks, and the social world.”

Cahn, who previously worked for Google, AOL Original Video and YouTube, created iFundWomen as a flexible crowdfunding platform that also would provide coaching and services for women-led startups, side hustles, passion projects and more, she said.

Cahn, a self-proclaimed “dual citizen” who sits on both sides of the table as an early-stage female entrepreneur and the creator of a fundraising platform for early-stage entrepreneurs, also said she created iFundWomen as a way to “pay it forward.”

“We always are looking for ways to fund female founders, so, we created an algorithm to help us figure out which campaigns on iFundWomen would benefit the most by us taking 20 percent off the top of our revenues each month and putting the cash into their accounts,” Cahn said. “We have to help each other — and, what is even more amazing is, half of the backers on iFundWomen are men.

“There are simply a lot of amazing people out there who want to be part of the movement in funding female entrepreneurs.”

Including Ita Ekpoudom, partner at GingerBread Capital, a venture capital firm based in Menlo Park, California.

“Our focus is in backing female-founded, high-growth, venture-backed companies raising $5 million and up with check sizes between $500,000 and $2 million,” Ekpoudom said.

“Ginger, a single mother to four kids, was fired in the 1980s, received $10,000 severance, and used it to start Minority Business Entrepreneur magazine, which she ran for 25 years until she retired,” she said. “So, if there is not a woman involved in your company, we are not interested.”

That is not exclusively the case at Edison Partners, Kelly Ford, a partner at the nearly 32-year-old venture capital firm in Princeton, said — but she also said it doesn’t hurt.

“If we are getting some sort of inbound interest, such as a pitch, a business plan or a deck through any channel, and it’s women-led, it goes to the top of the list,” Ford said.

“However, we’ve recently evolved into later-stage funding, investing in technology companies with $5 to $20 million in revenue that also have managed to grow, say, 30 percent or greater each year, with the typical average growth rate hovering around 80 percent at the time of investment,” Ford said. “Unfortunately, we have mostly male CEOs running our companies right now and would love to get to know and invest in more women-led companies.”

To receive money from any of these companies, however, the pitch must first be perfected.

“For example, I recently was speaking with an investor who asked a question of both a male and female entrepreneur,” Ekpoudom said. “The man sent her a response the next day written in poor English that answered her question.

“The woman, however, took over a week to send her a beautiful, detailed 25-page deck — and the man received the investment.”

An initial deck, Ekpoudom said, should not include more than 15 slides.

“You simply are talking about the problem to be solved, why you are uniquely qualified and passionate about doing so, the size of the market and how big a share you think you can get,” she said. “You just need to tempt me enough so that I want to take a meeting — and you also need to have material for a deeper conversation when you get into that room.”

Ford said she is confounded when entrepreneurs sometimes fail to even mention how they make money in their pitch.

“While the notion of how you make money sounds so basic, if you are 45 minutes into your presentation and we don’t know that yet, that is a mistake,” she said. “Additionally, every team member should have a lane in which to focus on while the CEO and founder shows off the different capabilities that she has hired for in being self-aware of her own gaps in strength.”

An investment is a two-way street, after all, Ford said.

“We are outnumbered in terms of access to these relationships, but hopefully we are beginning to start to change that.”

The biggest obstacle to funding for women, though, is still the confidence gap, Cahn said.

“Picture two 5-year olds, one boy, one girl, at swimming lessons,” she said. “The swim instructor calls them into the pool. The little boy jumps in the pool; the little girl thinks it through, questions how deep it is and looks for her floaties.

“Our brains are functionally built differently, so that, when we decide to go into entrepreneurship, we often are more successful than our male counterparts having thought through all of the different strategies, risks and rewards, but still all too often we are too reticent to make the jump.

“However, that, too, is understandable, because women, in many cases, are breadwinners who put food on the table and entrepreneurship is not an easy way to do that.”