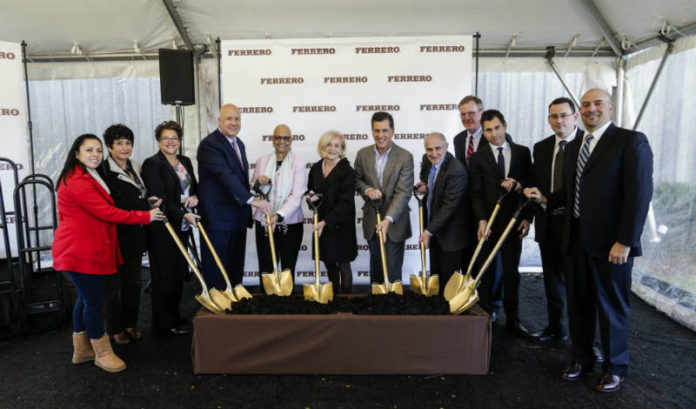 Moments after telling a small crowd assembled at his company’s facility in Franklin about how thrilled he was by its $9 million expansion, Ferrero USA CEO Paul Chibe hinted at what he hopes will be in the company’s future plans.

Expanding the corporate headquarters in Parsippany.

Chibe told ROI-NJ that Ferrero wants to expand its operations not only in Franklin, but in Parsippany, too.

Thursday, however, the emphasis was on the Franklin facility.

Ferrero USA, the U.S. branch of Ferrero SpA — the third-largest confectionery company in the world — broke ground on a facility that will add 67,000 square feet of functional space to be used for repackaging and warehouse purposes.

Chibe said Ferrero is expecting to support over 400 full-time employees and offer hundreds of more seasonal jobs by the end of 2018 at the facility. If Ferrero is to stay on track with its scheduling, Chibe believes by next summer it will be opening the fully completed expansion and will have officially added the over 100 new positions.

Chibe explained during his address that Ferrero’s confidence in New Jersey has grown tenfold and is only continuing to grow. Ferrero, he said, wants nothing more than to increase its presence and industrial footprint in the state.

Chibe told ROI-NJ that Ferrero is receiving no financial support from the government and that this investment is all allocated company funds.

Franklin Township Mayor Phillip Kramer praised Ferrero’s commitment to the area, calling its leaders heroes for how hard they fought to meet their deadline. Kramer believes expansions such as this one will attract other businesses to the area.

“Franklin is open for business,” he said.

Kramer acknowledged the town has not been known for being business-friendly in the past. Kramer attributes this to lengthy permitting processes.

“Time is money for these companies,” he said.

Kramer said his office went above and beyond to keep the major business in the town. This, combined with Ferrero’s persistence to do business in the state, made for a mutually beneficial relationship, he said.

This expansion will evidently have an effect on the local economy.

U.S. Rep. Bonnie Watson Coleman (D-12th Dist.) said the expansion is an example of what can happen when businesses and local governments effectively collaborate.

“In choosing to expand your operations, you’re helping to grow the economy at the local and the state level, you’re strengthening your surrounding community and you’re bringing job opportunities to this area’s residents,” she said.

Ferrero is known for big brand products such as Nutella, Tic-Tacs and Ferrero Rocher. Chibe said it is doing the expansion to keep up with the success and high demand of Kinder Joy in the U.S.