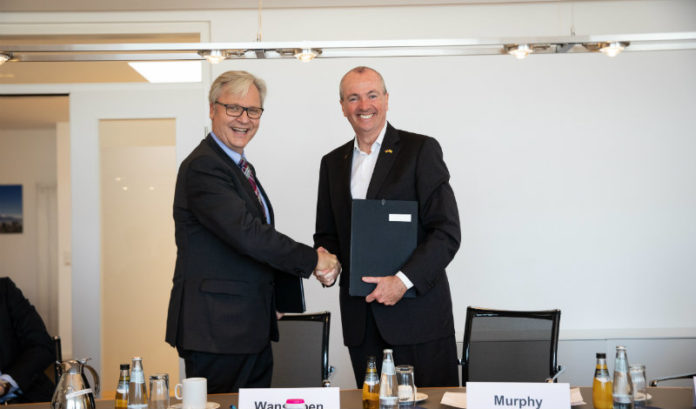 A memorandum of understanding to increase access between New Jersey and German companies and help foster greater collaboration on workforce development and training was signed by Gov. Phil Murphy on Friday in Berlin at The Association of German Chambers of Commerce & Industry.

The memorandum calls for a broadening of a workforce training program — which already exists between companies in New Jersey and the German American Chamber of Commerce.

The chamber, based in New York, has been facilitating similar economic programs with German and American companies, some of which are based in New Jersey, according to CEO and President Dietmar Rieg.

The nonprofit, which has been around since 1947 — prior to the existence of the Federal Republic of Germany — is increasingly focused on the workforce of the future, and manufacturing jobs that remain unfilled.

Germany currently has what Rieg called a dual education program, because half of the student’s education is in the school, and the other half is in the company — similar to apprenticeships.

At the end of the training, there is a certification, which employers recognize as a certain standard of training.

The program through GACC has trained 500,000 people every year in almost 460 professions.

New Jersey is especially prime for such programs, something New Jersey Manufacturing Extension Program CEO John Kennedy knows a little something about from his time with Siemens.

Kennedy said the idea of creating workforce training programs to help individuals grow within the company has been a successful model in Germany that he intends to pursue for New Jersey as well.

In December 2017, Kennedy authored a white paper for NJMEP to focus on exactly this issue, specifically focusing on its own program.

“An opportunity exists to allocate a portion of (state) bond funds to enhance and expand (the program) and to create a workforce roundabout that benefits all constituencies.”

Until then, GACC has an opportunity to lay the groundwork in New Jersey.

Rieg said New Jersey is home to at least 90 German companies, including many large ones, such as BMW, BASF or Siemens.

The larger ones tend to have their own internships and training programs, but the program helps smaller companies have access to a similarly trained workforce.

“What it does at the end of the day is, throughout the country, there’s a certification (the students) get at end of their education (after 2-5 years), and it’s a certain standard so everyone knows the standard to which you’ve been trained,” Rieg said.

But it doesn’t just apply to students, he said.

Military service members who leave the armed forces and are looking for a job, or individuals who have completed college or done some college and want a different career also tend to use this route.

The sectors currently benefitting from this training program include, typically, manufacturing and medical electronics as well as the chemical pharmaceutical industry — basically, any industry that relies on a shop floor for production, Rieg said.

“What we’ve seen in Jersey and other areas, in other states, if it’s done well … there are great results,” he said.