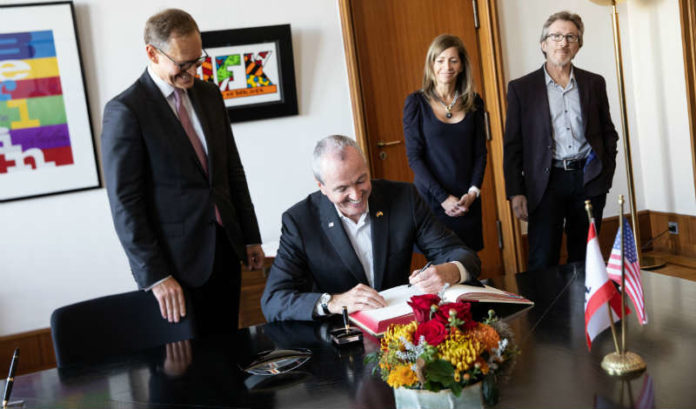 New Jersey will have a chance to learn from one of the thriving ecosystems in the world, and figure out how to use its best practices to boost the state’s efforts.

Gov. Phil Murphy signed a memorandum of understanding Friday morning in Berlin to exchange best practices for a tech and startup ecosystem between the state of New Jersey and the city-state of Berlin at Berlin’s city hall.

“I think we are taking a big step in a historic setting,” Murphy said.

“This agreement is an important one … to deepen the cooperation, particularly in the innovation economy. This is a big economy for you in Berlin, it’s big opportunity and big economy for us in New Jersey. We think the closer we work together, the more we can lean from each other, the better, ultimately, we will both be.”

The memorandum outlines a focus on innovation and entrepreneurship, in accordance with German and American laws, with resulting shared economic gains, as well as job growth, prosperity and progress.

In line with Audible’s efforts to focus on job growth and training in Newark, the company has laid a similar foundation in Berlin.

From 10 years ago, when Audible first opened its office with 12 employees, the company has grown to 200 in what used to be an industrial neighborhood in Berlin.

That’s the fastest growth and makes Audible’s Berlin office the second-largest outside Newark, according to officials.

Audible CEO Don Katz said the city-state and Newark have a lot in common, and companies in Newark can learn from the success Berlin has had in establishing a strong technology ecosystem.

That includes Newark Venture Partners, for which Berlin Partners is an equivalent.

Most of the startups in the United States are started by immigrants or children of immigrants, and Newark was just ranked the friendliest city for immigrants in the U.S., Katz said Friday in Berlin at the signing.

Michael Muller, the governing mayor of Berlin, praised Audible for its growth and work in the city-state, and said there is still more to be done.

Officials believe the MOU sets in motion a better way to pitch Newark, which suffers from the stigma and preconceived notions about its economy in the Northeast. But companies in other countries can be more easily convinced to commit to growth in Newark, as an extension of New York City and way to enter the NYC market — which many companies often do, company officials said.

Currently, 68 percent of German venture capital is in Berlin, alone, and the city has the highest percentage of immigrant startup founders in the world. There are 60 accelerators, which means a robust growth network for companies.

Murphy said Audible’s growth in Germany is a signal for the rest of the state.

“Audible is our North Star if we think about where our innovation economy is headed,” he said.

Real Estate
Eric Strauss -
May 13, 2021
A Hunterdon County industrial property has been sold for $1.21 million, according to Charity Realty International. The Fairfield-based real estate firm said in a news...

Retail
Eric Strauss -
May 13, 2021
Bed Bath & Beyond has named a senior vice president and general merchandise manager for its home segment, aiming to strengthen its merchandising strategies...

Inside Newark’s Amazon bid: Glover offers some details of how city...