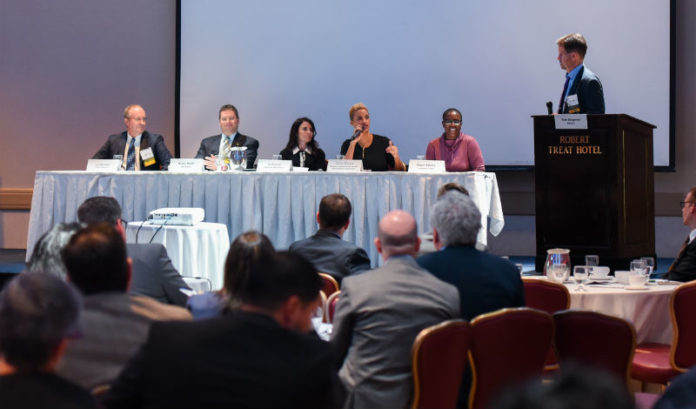 At the end of his introductory remarks — right after Martin Melilli told the audience how the way Cherry Hill-based TD Bank operates has made it one of the top banks in the state — Melilli made a personal appeal to the approximately 150 attending the Newark Regional Business Partnership panel discussion on the economic outlook for Newark and the surrounding area.

“So, all that being said,” Melilli started, “this was a long way for me to say that, for the bankers in the room, which there are a few, if this sounds interesting to you, we have openings and we are hiring, so please come see me afterward.”

The comment drew a few laughs. But Melilli, TD’s market president for many counties in central and northern New Jersey, was not necessarily joking.

One of the few downsides to a low unemployment rate in an expanding economy is the difficulty companies have finding good people to do the jobs they are looking to fill.

Melilli said TD is having trouble filling positions. Jay Weinstein, the New Jersey head of accounting firm EisnerAmper, said he was, too. And both said their many clients were in the same boat.

All three — along with Aisha Glover, the head of the Newark Community Economic Development Corp. — said finding people today is far different than it was in the past.

Kaplan, who has been with United for less than a year, said it has been a priority since Day One.

“The need for more talent and the fact that you constantly need to have a bench available to you is an ongoing commitment,” she said. “I think that the interesting evolution that I’ve personally seen over the years is the investment and talent and the investment in making sure that your HR department is best in class and that it is a strategic initiative within organizations.

“I know that might sound somewhat obvious, but it is something that I think, at the executive level, is something you really need to be thinking of investing in on a regular basis.”

How to do that requires transformational thinking.

“We’re hiring specific areas, such as our head of robotics, which is now located in New Jersey,” he said. “But we’re hiring some of the nontraditional accounting people into New Jersey, because that’s where the talent is.

Kaplan has brought that way of thinking to United.

It was an easy sell for her — after all, she was a nontraditional hire herself, coming from the publishing business.

“The thing that I’ve seen as the most successful way of being able to keep up to the needs is being creative and thinking out of the box,” she said. “Myself, for example. I’m not the typical aviation person. And part of (my hiring was) by design.

“Every business is going through, in my mind, a disruptive period of time. And you need to be thinking differently.”

Those thoughts, the panelists said, can not happen in a vacuum. In times like this, they said, it’s more important than ever to partner.

Glover said Newark officials are implementing a number of programs to connect jobs to job seekers.

“One of the major initiatives that Mayor (Ras Baraka) has is Newark 2020,” she said. “It’s a challenge for all of the corporations and anchors to a hire 2,020 residents by the year 2020. So, it’s very purposeful. It’s very intentional. It’s not just, ‘OK, hire.’ But, on the back end, to also be thinking about the onboarding and the training. How do we make sure that people are first and foremost aware of jobs?”

Glover said there are issues.

“I do think that there is a bit of a communication gap,” she said. “You’ll hear from employers, ‘We need folks.’ And then you’ll hear from residents, ‘Where are the jobs?’ Some of that is just how do we make sure that that information flow is improved so people are aware of what is open. It’s really intentionally making those matches.

“So, we’ve had commitments from nearly every major anchor in cooperation and around the city: 100, 200, 300 jobs each and, more importantly, specifics behind that with the types of jobs. That way, we can go into this very well informed and not just, 200 jobs for the sake of 200 jobs, but that we’re aligning training and opportunities directly with the specific jobs that are coming in.”

The success of the economy in the Newark area may depend on it, Melilli said.

“I see hundreds and hundreds of financial statements every year, and one of the things that certainly is a major trend is the increase in personnel costs, specifically for warehousing and transportation,” he said “You can’t find these lower-end jobs. They’re now costing these employers 200 or 250 percent more today than they were five or six years ago.”

Weinstein said he’s seeing it, too.

“From a performance standpoint, the last two years, including this one, have been record breaking for the majority of our clients — that’s manufacturing, distribution and professional services straight across the board,” he said. “The one area that we’re seeing is a trend this year that is starting to weigh down earnings is really in some critical-mission labor areas, such as warehouse personnel such as truck drivers.

“They are really important for the success of the company and we’re seeing our clients having a really difficult time filling those positions.”

Kaplan said United is expanding its search to solve this problem — for today and the future.

“I think that notion of being able to bring in folks that think broadly and widely and in a different perspective is critically important,” she said. “One of the areas that I personally am a big fan of, is being able to partner with educational partners, to start with folks early on, create internship programs where you are able to expose folks to a wide array of opportunities, almost like a residency program, and therefore you see where people blossom. You see where there are good fits.”