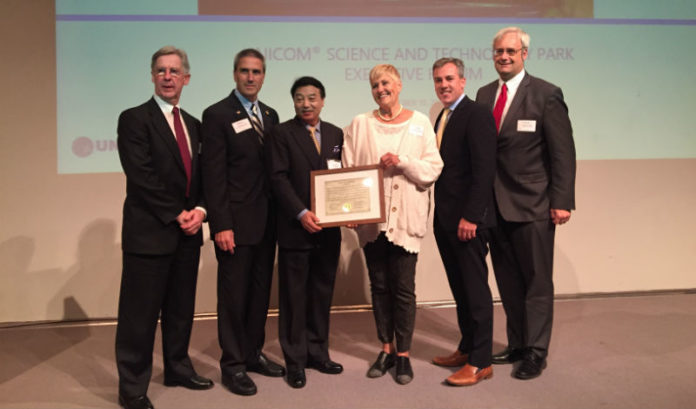 Corry Hong flew to Europe last weekend. He has meetings scheduled this week with some of the top CEOs on the continent. That’s what you do when you’re the founder of one of the largest technology companies in the world — a billion-dollar operation that does business around the globe.

But that’s not how Hong built UNICOM Global, the California company that surprised New Jersey when it announced it was buying and moving into the enormous and majestic Merck campus in Whitehouse Station within Readington Township.

An immigrant who came to the U.S. at age 20 from Korea not knowing a word of English, Hong studied computer programming at Pierce, a community college in Los Angeles, before dropping out to form UNICOM.

He still runs UNICOM as a mom-and-pop shop — and still feels most comfortable with entrepreneurs and self-made businesspeople. That’s why his first event in New Jersey, held last Thursday at the old Merck compound he now owns, was filled with local business owners, contractors and area elected officials.

Martin Webley, UNICOM’s director of business development who doubles as the company’s spokesman and communications director (because, like any mom-and-pop shop, UNICOM doesn’t have a marketing team), said these are the meetings Hong likes best.

“The state meetings will happen in due course,” Webley said. “He wanted the first one to be with the counties and the townships and the individuals and gatekeepers of the local area. This is not the CEOs and the governor; we have had and will continue to have meetings with them as we move forward.

“We’re here because we want to be part of the community and we want to help everyone in the community. These are the relationships we’ve been cultivating in the past two years, and we were able to meet them, face to face, for the first time.”

The first electrician and the first insurance agent he ever hired still work for him. Hong, in fact, joked that he made his insurance company get licensed around the country so he could continue the relationship as he expanded.

“I want to, as UNICOM grows, give mom-and-pops the opportunity to grow,” he said. “With so many of these entrepreneurial and hardworking people, if I have the opportunity that I can help in some degree, that’s the way I show my gratitude.

“This is my passion as a private enterprise. To me, it is a fundamental. Small business owners are 70 percent of the economy. The major corporations may have this structure or burdensome corporate overhead, whereas hardworking people have a much better feel. I’m more of a small entrepreneur. Giving small business opportunities and seeing them grow is UNICOM’s philosophy.”

Mark Saluk, the economic development director for Hunterdon County, didn’t believe what he was hearing when Webley first reached out to him — two years ago — in an effort to start a local partnership.

He said he honestly didn’t believe it.

“When I first got a phone call from Martin, he was telling me what I wanted to hear most in terms of their philosophy,” he said. “I thought it was a practical joke. I was waiting for someone to interrupt and say, ‘We’re just messing with you.’ It turns out, it’s been very real.”

Unlike anything he’s experienced.

“I’ve worked for 10 years in economic development — have done a lot of work with major Fortune 500 companies — and I’ve never a company that took this much of an interest in the early stages in partnering,” Saluk said. “And not just partnering during their ramp-up phase, but long-term partnering, sharing resources and information and just really making sure that they became part of the community before arrival.

“Frankly, I’ve been telling this to anyone who will listen, that I’ve never experienced anything like this. UNICOM is a unique experience.”

Many in the crowd of approximately 150 agreed with the thoughts.

Richard Wood and Chris Korinchak of Eii Inc., electrical and mechanical contractors in Cranford who had worked at the facility in the past, were thrilled to get a call asking them to come back and hear Hong talk.

“They wanted to know what we did before and if we wanted to do it again,” Wood said.

Hong said he wants to continue those type of relationships.

“That’s the benefit of me being the founder and me being the sole shareholder,” he said. “It’s really a unique opportunity to prioritize what is important. I’ve been just blessed with the opportunities and learning and meeting so many wonderful people. Our goal is going to utilize local opportunity.

“In fact, I’ve been talking to our team. We have about 300 national contractors and suppliers supporting, supplying this facility. I keep telling my team to look into small mom-and-pop shops and bring them in. Merck used thousands of these national-brand companies. Me, as an entrepreneur, I want to reach out to a small mom-and-pop rather than a national brand. As a private company, I’m going to reach out to the local mom-and-pop shop and bring their expertise.”

Webley understands some may be skeptical. But he says it’s very real — and the very thing that attracted him to the company.

“He’s successful — and he continues to be successful with no sales or marketing division,” Webley said. “It’s just, ‘How can I help?’ Or, ‘What do you do?’ Or, ‘What resources can we introduce?’

“This is the fastest-growing tech company that most people have never heard of, yet it’s been around since 1981.

“Through organic growth and strategic acquisition, he’s grown it to 48 companies in 22 countries, with a customer roster that’s a who’s who of international business. That’s why he doesn’t need to impress anybody.”

Both would have been thrilled to have any tenant occupy even a part of the more than 600-acre complex that, in many ways, controls the fate of the area. To get a company such as UNICOM — one which pledged to stay here forever — and a leader such as Hong, was beyond their wildest dreams.

It appears to be a perfect partnership. In fact, Holt already is picking up on Hong’s philosophy.

He ended his brief talk with a personal tale.

Holt’s father, he said, had been a lifelong collector of pins — and amassed more than 2,000 from around the world. Pins, he said, have become near and dear to his heart.

When Holt was first elected to the freeholder board in 2006, he said he was given three pins representing the county. One, he gave to his father. He presented Hong with a second — taking it out of his lapel in a significant gesture.

“It is without any equivocation and with the greatest of pride, sir, that I would like to present you with this pin representing Hunterdon County,” he said. “This is near and dear to my heart, and I cannot think of anything better to give you that represents our county. Welcome.”

After a burst of applause from the audience, Holt ended with a simple thought.