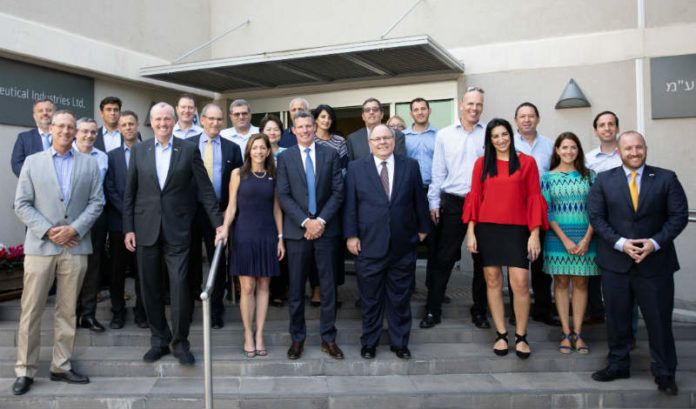 New Jersey governors have always visited Israel at some point during their term, and the reasons have always been either political or economic.

The state is home to the second-largest population of Jews, per capita, in the country, and is similar in size and population to Israel — making for a strong sister relationship.

But less popular is an engagement with Palestine.

On Gov. Phil Murphy’s agenda Tuesday is a business roundtable with a Palestinian group, where the governor says the focus will be on the similarities, rather than the differences.

He has changed the tradition of governors by engaging with both sides of the controversy from New Jersey.

In a 1996 New York Times article, the question of Palestine was raised about Gov. Christie Whitman’s trip to Israel.

“The governor and her aides have also had to explain the absence of any planned meetings with the Palestinian Authority, now a common stop during visits here by foreign dignitaries,” according to the article.

“They reply that New Jersey has no history of trade with the Palestinian areas, while Israel is a major export market, but they promised to meet Palestinian Authority officials in the United States.”

Mark Levenson, chairman of the New Jersey-Israel Commission, said the governor is right to do so.

“As he should,” Levenson said. “He is governor of the state of New Jersey, which has a significant Palestinian population. He should look to serve all the constituencies in the state. That is perfectly appropriate.”

Murphy is borrowing from the playbook of the president under whom he served — Barack Obama — who attempted to broker a peace deal during his two terms in the White House.

Levenson, who backed former Lt. Gov. Kim Guadagno during her gubernatorial campaign against Murphy, is also a  co-chair of the Real Estate Department at Sills Cummis & Gross and a past president of the N.J. State Association of Jewish Federations.

He joined the second leg of Murphy’s nine-day economic mission trip to Germany and Israel, and said the governor was following a longstanding tradition of engaging Israel.

“I hate to use the term low-hanging fruit, but it’s a good target to go to,” Levenson said.

Unlike in Germany, where Murphy spent the first four days of his nine-day economic trip to Germany and Israel, tensions about President Donald Trump are not as high, Levenson said.

Especially after the announced move of the U.S. embassy to Jerusalem.

Levenson said he was staying positive about the governor’s trip and is focused on the significant steps Murphy is taking to help boost the state’s economy.

Triple play: Egenton tells Budget and Appropriations Committee that these 3...