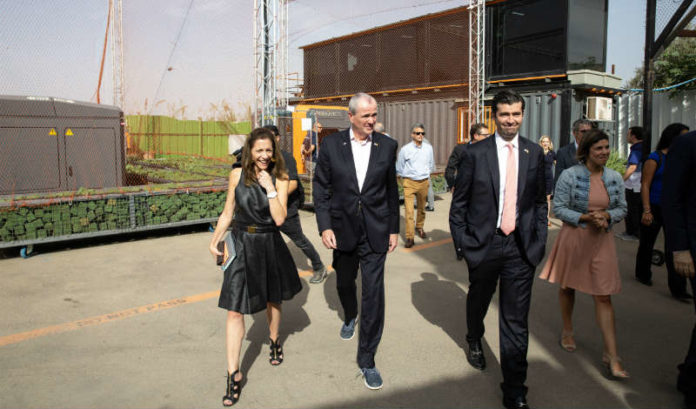 The memorandum of understanding signed Sunday in Tel Aviv between the Israel Innovation Authority and the New Jersey Economic Development Authority began with a conversation at the Biotechnology Innovation Organization convention in Boston in June.

The IIA was doing a presentation at BIO, where Choose New Jersey CEO and President Jose Lozano — just a month on the job — was present.

Lozano was impressed by the presentation and asked his team to engage with IIA and set up a breakfast meeting before the end of the conference week, he told ROI-NJ on Monday in Tel Aviv.

Lozano is part of the New Jersey delegation following Gov. Phil Murphy on a nine-day economic mission through Germany and Israel.

A breakfast meeting was set up for the last day of the conference in June, where Lozano pitched New Jersey and asked if the IIA was interested.

He mentioned a possible trip to Israel with the governor then, and asked if a framework could be agreed on by then.

“They said it was a short time frame, but worth the conversation,” Lozano said.

After a framework was set up, Choose sent it over to the EDA to iron out the details and take the lead.

The memorandum was approved by the EDA board in executive session Oct. 11, just days before the governor flew out of the state to begin his nine-day trip.

Now, the EDA is tasked with finalizing the structure of the agreement, so the IIA can begin executing on it, according to the EDA’s vice president of the Office of International Trade and Investment, Wesley Mathews.

It’s a much heavier lift for New Jersey, since no existing agreements exist — unlike Israel, which has similar agreements in place with other states, Mathews said.

The goal of the agreement will be to ensure a greater partnership between companies in both places. There will be three different avenues.

Mathews said each relationship should support research and development or a commercial project, but will have different commitments from the EDA.

In the first two relationships, it is understood the corporation will take on a significant role in funding, with a capped commitment from the EDA. For the third relationship, between two smaller entities, the EDA is going to set aside a budget.

That budget is yet undetermined, but could be as much as $1 million.

The hope, Mathews said, is for this to expand beyond the relationships with Israel.

“The proposal the EDA is creating, is something we could duplicate in other countries,” Mathews told ROI-NJ on Monday.

“We would like to duplicate this in European countries, in East Asian countries, anywhere that we see an innovation ecosystem, and a country that has the structure like IIA to do this.”

But, in order for this pilot program with Israel to take off, the EDA board has to vote on the final structure.

Mathews said the EDA is targeting an approval before the end of the year.