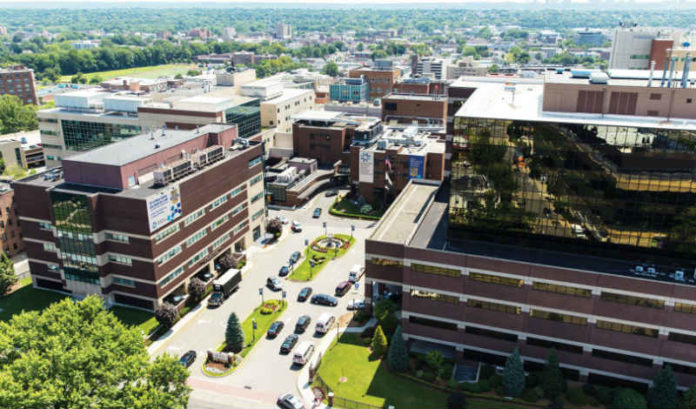 Garrett said the $714 million expansion will feature a 300,000-square-foot tower with 200 private rooms, 50 state-of-the-art intensive care beds and 24 new operating room suites built with the latest technology, as well as a new entrance to the hospital.

“It’s moving along,” Garrett told ROI-NJ. “We’re going through the final stages for approval from the city of Hackensack. They’ve done some preliminary work to prepare the site and it should start officially breaking ground by toward the end of the first quarter of next year, maybe early second quarter. And then it should be online by 2022.”

Garrett was speaking on a panel discussing the business and economic impact of health care on the economy, sponsored by the Meadowlands Chamber of Commerce’s 2040 Foundation.

The expansion will have a big impact on the area economy, Garrett said.

“It’s the largest expansion in the history of Hackensack University Medical Center,” he said. “It will create about 300-400 construction jobs during the peak and about 1,500 employees will be working within the tower once it’s fully operational,” he said.

More than that, it will enable Hackensack Meridian Health to offer more care to the community.

“This project is going to be really significant,” he said. “There are going to be services and programs put into place with this tower, so people won’t have to travel to New York or out of state anymore.

“So, we think it’s really going to meet the needs.”

Garrett said the tower represents another way in which health care delivery is changing.

“When I look at the way health care is growing these days, it’s on the ambulatory side, and it’s on what I’d call the more complex side: the tertiary, quaternary side,” he said. “This is going to really address that tertiary, quaternary growth because, with the population getting older and chronic diseases still on the rise, we’re going to need that type of high-end service.”

Garrett was recently chosen for the No. 1 spot of the ROI Influencers Health Care list for 2018. See the complete list here.

The Meadowlands 2040 Foundation, an affiliate of the Meadowlands chamber, supports chamber activities to sustain a strong economy in the region through the year 2040 by conducting research, providing educational programming and engaging and developing awareness initiatives that help improve the quality of life for residents in area communities.