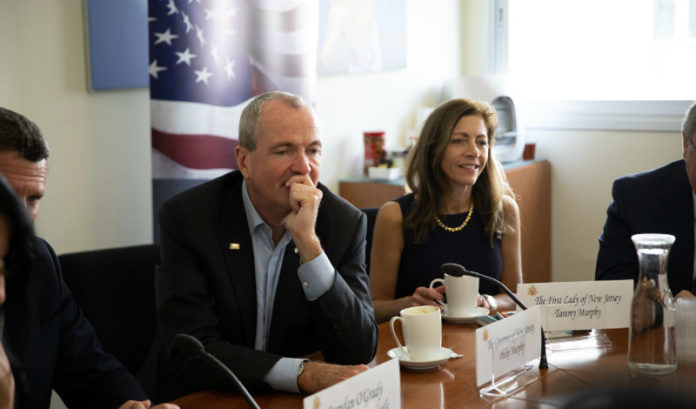 Murphy’s actions Tuesday are a departure from the tradition of previous governors, who have not visited the Palestinian region — but he is not the first governor in the U.S. to do so.

Officials from the Palestinian American Chamber of Commerce and the U.S. Consulate General in Jerusalem said governors from Massachusetts, Michigan, Nevada and Wisconsin are among those that have visited in the last three years.

Murphy heard from businessmen in the technology, life sciences and retail sectors, who explained the restrictions they face in expanding or operating business in the West Bank and Gaza areas, as well as the cumbersome process in sending employees from one location to another.

One businessman said he has not visited his operations in Gaza in 18 years and was finally able to get the required permit this year.

ROI-NJ was asked by officials from the U.S. consulate to not identify the companies or the business leaders who attended, due to the sensitive nature of relations between Israel and Palestine over the recent announcement of the U.S. embassy moving to Jerusalem.

During the meeting, Murphy highlighted the strong Palestinian-American presence in Paterson and talked about opening a channel for greater economic collaborations.

Most of the companies do not have a U.S. presence, but have done business with U.S. companies, such as Jeep, Chrysler, Hyundai, Johnson & Johnson, Abbott, Eli Lilly, Microsoft, Hewlett-Packard and Nokia.

One CEO of a medical equipment company told the New Jersey delegation he was looking to expand in the U.S. in 2019, and now that he has met the governor and heard the pitch for New Jersey, he wanted to take a trip in the near future to see the Garden State.

Said Baransi, chairman of the Palestinian American chamber, said the biggest way New Jersey can help the region thrive is by encouraging its capabilities in the innovation economy, as well as encouraging more partnerships.

“For the outsourcing industry, we can offer services for software engineering, for these American companies in New Jersey and others. If it is hardware, we can import these products,” he said. “There is a lot, on the bilateral level, between American companies and Palestinian companies. We have tens of American businesses that are represented and are doing very good business in Palestine for the last two to three decades.”

Baransi said the industries that Palestine excels in include information technology, food and agribusiness, and pharmaceuticals and medical equipment.

Choose New Jersey CEO Jose Lozano said the meeting was hard to set expectations for, unlike other business meetings on the trip, because it was the first time a governor of the state has had such a meeting.

“It’s the first of many,” Lozano said. “So, we planted a really good seed.”

Economic Development Authority CEO Tim Sullivan said the significant presence of Palestinians in the state is a big motivator of better economic ties to the region.

“We’re excited to begin that dialogue,” Sullivan said. “It’s not something that emerges overnight, but it paves the way for a long-term relationship between New Jersey and the Middle East.”

Mark Levenson, chairman of the New Jersey-Israel Commission and a member of Sills Cummis & Gross in Newark, said Murphy was right to meet with the Palestinians.

“As he should,” Levenson said. “He is governor of the state of New Jersey, which has a significant Palestinian population. He should look to serve all the constituencies in the state. That is perfectly appropriate.”

Levenson spoke in the days leading up to the meeting.