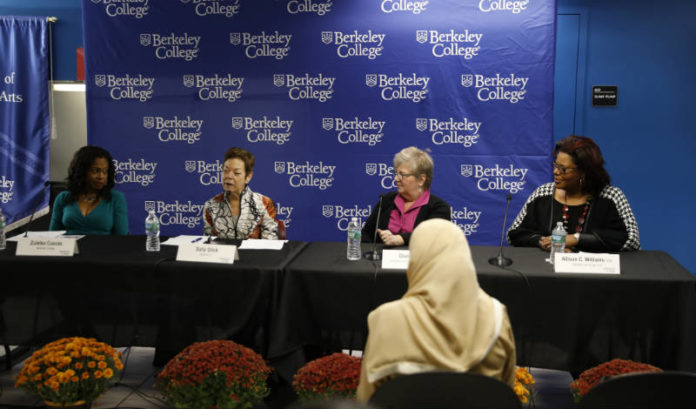 Zuleika Cuevas said one must always have the confidence to belong wherever it is she believes she does.

“It was Maya Angelou who said, ‘I come as one, but I stand as 10,000,’” Cuevas said. “You, too, deserve to be here, because you represent the strength of all the women who have come before you.”

Cuevas, manager of training and development at Berkeley College, spoke on a panel of women industry leaders to the more than 100 students, faculty members and businesspeople attending Berkeley College’s fourth annual Women in Leadership conference in Woodbridge on Thursday, designed to empower women both economically and politically during Women Entrepreneurship Week.

The panel, entitled “Breaking Barriers,” drew praise from Michael J. Smith, president of Berkeley College, for participants’ dedicating their time to the conference.

“A number of students already have made very powerful connections,” he said.

Moderated by Mary Wagner, interim dean at the Berkeley College School of Graduate Studies, the panelists reflected on their own career experiences in order to provide leadership advice for the students and career women in attendance.

“I grew up in a household that required of me dedication and success, whereas my older brother was not academically successful, but loved no matter what,” Allison C. Williams, founder and owner of Williams Law Group in Short Hills, said. “I therefore grew up resentful of how I was encouraged to be an overachiever.”

Though Williams would become a well-known family law attorney dealing with divorce, domestic violence, child custody, support, abuse and neglect, Williams said her emotional fragility ultimately had consequences, including anxiety, depression and, at one point, alcoholism.

“But, in 2012, I decided that was enough, and I recovered within the year with counseling and coaching to start my own law firm in 2013,” Williams said. “I have since grown that firm 856 percent into a seven-figure entity and also now help other lawyers grow their own firms, too.

“As a leader, you are often by yourself, and you must stand by what you believe in to pursue whatever the course is, no matter who disagrees with you. People are always going to disagree with you. You should not solicit opinions every time you have a thought; women especially like to do this to process through ideas and have discussions, but, sometimes, I have decided things and then announced them because I had done the research.

“I am not suggesting one be insular — seeking out professional guidance is OK — but don’t try to be friends with everybody. You should always be concerned about doing the best for everyone, which will inherently mean someone will get less of what they want.”

Diane Walsh, executive vice president of communications and programs at the Commerce and Industry Association of New Jersey, said that, on the flip side, women do bring to the equation their innate ability to collaborate.

“This can give them an edge in many ways,” she said.

For Walsh, that was getting people to trust and open up to her as a newspaper reporter for nearly 30 years.

“Because I am a small woman, people do not feel intimidated by me,” she said. “I have an amiable personality and am able to ask a lot of questions of people in an interview setting.”

In 2009, however, Walsh took a buyout at The Star-Ledger.

“That was a scary moment, to move out of my comfort zone” she said. “But I was able to take my writing and communications skills and walk out.

“For many years, I was an observer — now, I work on the other side to create effective events, programs and panels.”

Walsh said a leader must not simply have a vision — she must also be able to communicate it to others to tell them why it is important.

“A leader must be able to both recognize the greater good and also be able to enlist others to her cause,” she said.

“You can be a good person and not necessarily be a good leader,” she said. “As a leader, your job is to have everyone else be their best. It goes beyond being kind, empathetic and thoughtful, but you also must be able to inspire, motivate and provide the tools for others to successfully integrate the overall goal and vision you have for the organization.”

Glick, a Chicago native, said she began working for her father, a certified public accountant with his own practice, at an early age after studying speech pathology at Northwestern University.

“It was pretty remarkable to put that kind of responsibility and ownership on me in my early 20s, especially because there were no websites or social media at the time and word-of-mouth marketing was the best we had in a service-oriented environment,” Glick said. “But, I thought, what a wonderful opportunity to grow a business with my father.

“So, my job at an incredibly young age was to create a presence in the community for my father’s small accounting firm and get clients to come to us to be retained.”

Glick said that premise remains true in her role today at Sobel & Co., a small, family-owned accounting firm in Livingston.

“All of the things I learned about building important relationships, I learned from him,” she said.

Finally, prior to her role at Berkeley College, Cuevas recalled working as the vice president of the National Hispanic Corporate Council, a not-for-profit Hispanic women’s organization that partnered with Fortune 1000 corporations to help teach Hispanic women managers how to get into the C-suite and onto boards.

It was there, Cuevas said, that she learned to be a “lioness” — and work with other “lionesses.”

“A lioness is smaller, more agile and more strategic,” she said. “A male lion steps back and lets women do the work because we have the skillsets needed to wait for the right opportunity and ultimately get the job done.”

Finally, WalletHub has some good news for N.J.’s future

A personal trainer for health and wellness = a personal learning...