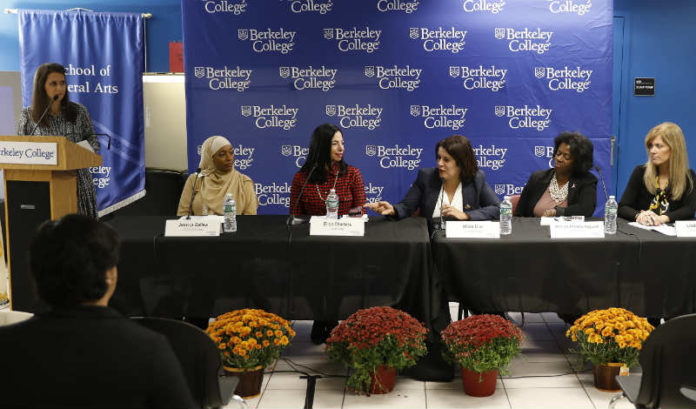 “That is the largest number of women in the history of our country running for office,” Harrington, vice president of communications and external relations at Berkeley College, said. “We can activate our voices with our votes and with our actions.”

Harrington delivered her call to action to a room of more than 100 students, faculty members and businesswomen attending Berkeley College’s fourth annual Women in Leadership conference last week in Woodbridge, designed to empower women both economically and politically during Women Entrepreneurship Week.

Joanna Gagis, producer and correspondent for NJTV News, moderated a panel of women leaders across nonprofit, political and entrepreneurial sectors to discuss the importance of diversity in politics and beyond.

“If we’re trying to tap into the Latin or African-American community, for example, the best person to ask advice would be a Latina or African-American woman,” Jessica Ballew, chief empowerment officer and founder of J.E.S.S.I.C.A. Cares, said. “A company also can expand and retain their employees in this way if they, too, feel they are part of the decision-making and growth of the company.”

J.E.S.S.I.C.A. Cares, Ballew said, is a nonprofit organization that holistically empowers young women and their mothers via weekly programming, including entrepreneurial courses.

“We help them to own their identities and journeys toward becoming extraordinarily strong, successful individuals with courageous aspirations,” she said. “We have the chance to make what was once a generational curse a generational blessing.”

“Men who believe in creating equality for everyone can help sponsor you to help you get to your next level of impact,” Wellbrock said. “And those men are starting to come forward.”

Wellbrock cited Marc Benioff, CEO of Salesforce, as one particular change agent. He spent $6 million of his own money to address pay inequity within the company.

“When big companies acquire smaller companies and are not necessarily looking at who is being paid equally across the board, that factor may go unnoticed,” Wellbrock said. “Sometimes, as a leader, you don’t know what needs to be done until you walk the path, but you are then responsible to come forward and make the necessary changes.”

Elisa Charters, co-founder and president of Latina Surge, a nonprofit that advocates for the diversity and inclusion of women of color in Corporate America, said her organization focuses on self-empowerment.

“We believe we can help ourselves and a lot more if we act collectively,” Charters said.

For example, Charters said, it is incumbent upon feminist consumers to think about how to best reward companies who exemplify diversity and inclusion — and how to spot imposters.

“I always think of Jennifer Lopez shaving her legs with a Venus razor — but, what is that company actually doing for women and women of color? Is there representation in their C-suite? How much money do they raise for women’s causes? Do they have supplier diversity with women and minority-owned businesses?” Charters said. “If we demand certain answers from the companies in which we purchase from, they will need to listen, because their shareholder value depends on it.”

“So, ask yourself, what motivates you, and what triggers you?”

Wilda Diaz, mayor of Perth Amboy, said being the first and only Latina mayor in New Jersey often can be trying.

“For 10 years, seven days a week, 24 hours a day, I have been the only Latina mayor — can you imagine?” she said. “But, as the advocate for the women, men and children who live in our city, it makes me want to work harder to prove that, yes, I can. I simply must show up as prepared and informed as possible to make my decisions.”

Her goal, Diaz said, is to encourage other women to seek office, too.

“We must be at the table making decisions for our families and our communities,” she said.

Patricia Perkins-Auguste said she has been at the table for nearly 26 years after becoming the first African-American woman elected to city council in Elizabeth.

However, for the last 12 years, she has been the only woman on the council.

“I went to school to be an accountant — numbers don’t talk back, lie or argue — but my dad wanted me to be a lawyer,” Perkins-Auguste said. “And, now that I find myself advocating for everybody, I feel as if he was right.”

Female political power is key, she added, but it must be handled delicately.

“With my being the only person at the table who can represent such diversity as a woman, a mother and an African-American, my approach is not one of an aggressor, but, rather, an advocator,” Perkins-Auguste said. “I must speak up to make others realize how something may affect a certain segment of the population and see how we can come together to rework a policy so that it benefits everyone.”

Women in politics should not act like the men do, she added.

“Instead, be the nurturers, the ones who understand what it means to feed a child, send a child to school and make sure that child can work later on — we need that in politics today,” Perkins-Auguste said. “So many women are currently running for politics because they understand now that to save the global economy, our nation’s integrity and all of the things that make us human, women have to get involved.”