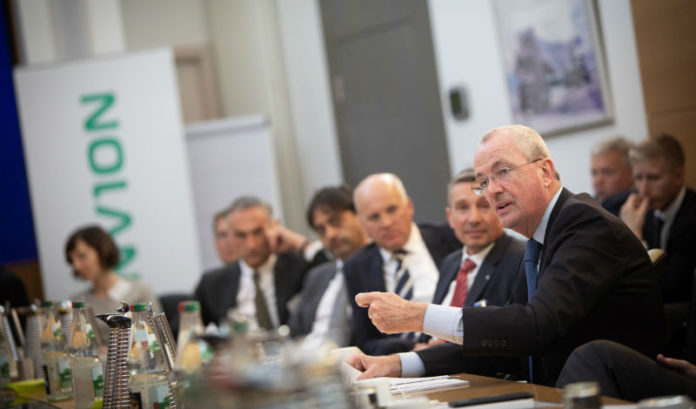 Gov. Phil Murphy made one thing clear during his eight-day trade mission to Germany and Israel: New Jersey is interested in attracting business from all over the globe.

Even from both Israel and Palestine.

The governor made 48 stops during the trip, formally establishing some relationships while putting the pieces in place, he said, for others.

“We did get some tangible results and we planted a lot of seeds and furthered some conversations,” he told ROI-NJ in an exclusive interview before returning home. (Listen to the complete interview on The ROI-NJ Podcast here.)

And, while his trips in Germany drew a lot of attention due to his connection to the country where he previously served as ambassador, his stops in Israel — particularly particularly one with Palestinian business leaders in East Jerusalem — may have been the most unique.

No governor in the state has ever done it before.

Murphy said he was not concerned the meeting would cause any problems in New Jersey, which has a large population of Jewish residents and business owners.

“No, not at all,” he said when asked if about any negative reaction from the Jewish community.

“And I don’t know how anyone could be (upset),” he said. “We’re just trying to call balls and strikes, and I was really happy that we sat.”

Murphy said he viewed potential partnerships with Palestinian companies as natural for the state, which he said has the largest Palestinian population in the U.S.

“We had wanted to reach out through the consulate, (to meet with) some representatives of the Palestinian business community in East Jerusalem,” he said. “We met (seven companies) with business interests (in East Jerusalem, the West Bank or Gaza). I was impressed. There (were) some really good corporate stories there, including some that do a fair amount of business in America. My gut tells me there’s an opportunity to do more.

“We’ve got the largest Palestinian community of any American state, and it’s probably the least developed, just because of all of geopolitics that are around it, business relations. One of the follow-up ideas, and I mentioned this to another Palestinian technology entrepreneur, is they should get on a plane and fly over and see our situation with their own eyes.”

Murphy said it was another example of taking the first step in a deal.

“I was impressed,” he said. “It’s a meeting the likes of which I have not done before. I think there’s a lot of untapped upside. Long journeys of life start with one step or a first step.”

The following are question-and-answer excerpts from the interview regarding the trip. The answers were edited for space and clarity.

ROI-NJ: At every stop, you mentioned the Evergreen Fund, something that still requires legislative action. How confident are you that you’re going to get this done?

Gov. Phil Murphy: It’s something that no other state has done. It’s a way to connect large companies and their economic interest with the startup culture and get serious money in the venture capital space. It’s early, but the early interactions have been very positive in both chambers (of the Legislature). The current generation (of tax credits) expire on June 30 of next year. We don’t want to wait until then, so we’re drafting legislation as we speak.

ROI: Are you afraid that this might be part of the budget battle for next year?

PM: I hope it isn’t, because it’s in everyone’s interest. This is about growing our economy in an entirely unique way.

ROI: Germany was a homecoming for you. How did you feel about returning?

PM: I do love speaking some German, so that was fun to practice. I had never been back to the embassy since I have left. So, that was a pretty emotional return, seeing a lot of former colleagues who are really good to see. As it relates to New Jersey, we touched a lot of bases, as we did in Israel. Interestingly, while it was more of a big company visit with the likes of (companies) who are already in New Jersey, plus some other big ones who we’re trying to attract, it was also surprisingly (about startups).

This has evolved in Germany. You would expect the startup culture in Israel. For whatever reason, it has been slower to take hold in Germany, but we spent (a lot of time with) smaller startups (naming offshore wind and cyber companies).

PM: This is our sixth trip to Israel. The one was in August of 2014, and I’m proud to say it was during the Hamas War. So, I came into the teeth of that. From the very first time, we have tried to find ways to hear all sides.

In that first trip, for instance, not Palestinians but Israeli Arabs were part of our focus. We met with an organization which exists to find common ground between Jews and Arabs inside of Israel. We met with them again on this trip. This trip, we also went to a boarding school. That school exists literally to recruit Palestinian and Israeli young people in 10th, 11th and 12th grades, as well as some other nationalities, where they actually live together, which is extraordinary.

ROI: Throughout the trip, there were some meetings with companies who have existing relationships with New Jersey. Does it not then sort of act as an echo chamber of sorts if you’re sort of speaking to people who are already aware of New Jersey?

PM: Well, I think it helps, because I think the more you know our story, the more likely you are to come and invest or stay. Teva Pharmaceuticals, for instance, hosted us. Yes, they already made the decision to consolidate their North American operations in New Jersey, so that was good. But at the same time, they graciously hosted, with the embassy, probably 20 smaller life sciences companies.

That’s where the magic is — that venture capital idea — that’s probably also where the magic is in the economic relationship generally between Israel and New Jersey. (It’s) where you get that institutions of higher ed, big companies and startups in that sort of virtuous circle. And when that happens, you can step back — it’s going to explode.

That’s the Boston story. They’ve been able to deeply embed MIT and Harvard research in particular, take it from theoretical to applied research to commercialization. And that’s attracted, in their case, everybody from General Electric, which is a big company, to a whole startup culture. We not only have the same amount of tools at our disposal, I think we’ve got more to do just that, we’ve just got to do it. So far, so good. In both countries, I think we made a lot of progress toward that.

ROI: Is it fair to say that there were a lot of actual tangibles that you were able to achieve?

PM: We got a half-dozen or so memoranda of understanding that have real substance. We got a couple of companies to actually say they’re coming to New Jersey.

I don’t want to jinx it, because it’s a very complicated situation, we talked to someone who — wherever they land, and we’ve got a real shot — has the potential to actually make stuff in New Jersey and a potential of over 2,000 jobs doing it, including high-end research. There are a lot of moves that have to come together before that happens. But we did get some tangible results and we planted a lot of seeds and furthered some conversations.

There’s definitely nothing like when you show up. I’m not saying this to pat myself on the back, but please find another governor who’s been here six times in the past four years (or has a state that has, with Israel, so) much similarity and depth of connections and relationships. It’s a pretty compelling case.

Again, I always say this, if you’re a one-issue voter, if all you care about is cost of doing business and your tax rate, we’re probably not going to end up winning. But if you care about the entire ecosystem, the entire environment, as I think most, if not virtually all Israeli entrepreneurs care about, we think we’re the state of choice.

Bramnick: N.J. should step in and help employees who have been...