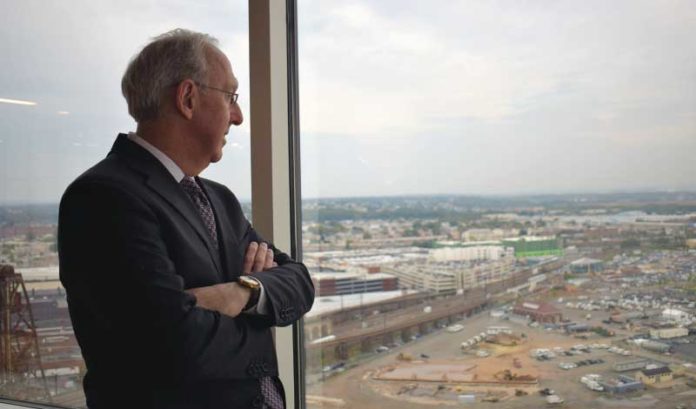 Kevin Conlin has been at the helm of the state’s largest insurer, Horizon Blue Cross Blue Shield of New Jersey, for three quarters of the year, but his new role puts him in familiar territory.

After all, he’s had his fingerprints all over the company’s strategy for the past six years.

When Conlin, former chief operating officer, took over as CEO in January, it was a quiet affair — similar to how he has handled the transition, observers have said.

His predecessor, Robert Marino, had risen to notoriety during a battle with then-Gov. Chris Christie over an attempted raid of $300 million of the company’s reserves.

“If quieter means we’re not out fighting with the governor around the reserve raid — that situation hasn’t presented itself and it hasn’t been necessary,” Conlin told ROI-NJ in his first-ever interview as CEO.

“I think the strategy of the company is something I’ve had my fingerprints on for probably six years now,” he said. “So, the fact that a new year came doesn’t change that reality.

“The vision I have continues to be a very ambitious one. It’s to really to get to a very different way to work with providers. To me that’s a very bold vision and we’re going to continue doing that.”

Conlin has been making moves.

Step One, he said, was to hit the refresh button on the organizational structure.

“I wanted to challenge the team, including the board, to think through (the strategic plan),” Conlin said.

“We’ve spent a good bit of time with our head down,” he said. “It comes as no great surprise that we affirmed a lot of the direction we have been heading in. But we have tweaked some of our focus as we move forward.”

That meant delegating more authority to those better informed on the situations.

“I’ve asked that we structure the company, internally, in a fashion that is more consistent with our strategic direction,” he said.

There are now two heads of the two major product lines in the company — government plans and commercial plans.

Medicare, Medicaid and the State Health Benefits Plan are under interim Mark Barnard, while Christopher Lepre is tasked with oversight of the commercial products, including on the exchange market.

“Part of what I was trying to accomplish was to allow us to bring greater focus in our business-decision making,” Conlin said. “That’s not something we were structured around previously. Now, we have some accountability owners.

“Before, (accountability) was vested, in some cases, only at the CEO office. It required the CEO to break ties on some decisions. We decided to have that a step down from this office. It’s best the individuals closest to the business and the market are the individuals making the final calls for slight changes in one direction or another.

“We are blessed with strong people here. I trust them.”

And, if the first nine months are an indicator, that trust has been validated. The company is already seeing signs it is running more efficiently, Conlin said.

“In addition to that, we have to concern ourselves with profitability,” he said. “So, management not only of the revenue side of things, but cost side, be they medical costs or administrative costs. That’s another key area or focus.”

Understanding the new direction obviously is a huge priority, too. Conlin asked Allen Karp to step into the role of leadership of that activity.

“I’m pleased with the progress we are making,” he said. “And the degree with which the team has absorbed a different way of performing.”

One of the ways health care is changing is through what is known as value-based care. That is when insurers are reimbursing providers based on caring for patients for one payment, rather than paying for each add-on service provided during a visit.

Some critics have said that, in its current format, it is similar to volume-based care. Conlin said that is part of the shift.

“The insurance sector, and the provider sector, have business models and investments in what has been, largely at this point, a volume-based approach,” he said.

“We are ahead of the curve with the investment we made in value-based care. And our partners are in the process of catching up, but it requires both sides of that equation and that partnership in order to get to the point you are able to produce a meaningful improvement in cost, quality and member experience.”

It will take time, Conlin said.

“We’re seeing results that are heading in the right direction,” he said. “I can’t speak for value-based care in the U.S., or in the state of New Jersey. I can speak about it in the partnerships we are operating and we’re getting traction, we’re getting results. We plan to do more of it.”

That is where the OMNIA Alliance and its results are playing a role. The Alliance is a partnership of seven health organizations in the state, all of which have agreements with Horizon to work on gaps of care in their service area.

“The way I look at it is: Our message is the same to any provider that we contract with, which is, if you help us move the needle on the triple aim, we’re very interested in paying you on the basis of that,” Conlin said.

The triple aim is known in the industry as focusing on increased quality, lower cost and patient satisfaction overall.

Of Horizon’s 3.8 million members, 1.7 million are interacting with the health care system under the new value-based format, according to Conlin.

The OMNIA plan itself has about 450,000 enrollees.

“To the extent that a provider is interested in having access to that, we’d love to talk with them,” he said. “We’re very interested. OMNIA is frankly a separate mechanism, but it is the same thing, which is a transition to value-based care.”

Conlin said Horizon is helping to support improvements in the health care system in many ways.

One way is through making small investments as either a stakeholder or paying for trial runs of new processes or drugs.

This practice began under Marino, when he hired a former senior vice president and chief strategy officer, and an entrepreneur in the health care space, Minalkumar Patel.

“We have a team here that does evaluate (investment opportunities),” Conlin said.

To-date, Horizon has invested in COTA, Pager, AbleTo, Zipari and GNS Healthcare. The stake is between 1.5 percent and 8 percent, and totals $20 million for all five.

The decisions are made based on what the insurer sees a need for, rather than something that may be useful in the future, he said.

But the company also needs to ensure a return on the investment by tracking financial performance, used from the company’s reserves, but investments are made conservatively, with the understanding that their source is supposed to pay for claims.

“Our primary focus here is not to make money on the returns, our primary focus is to actually access some market-leading startups that seem to have significant promise for activities we are trying to get done,” Conlin said.

Horizon, Conlin said, is exploring a number of areas.

With the success of the OMNIA strategy — which Conlin helped craft — the company is now expanding the value-based platform into new avenues.

“We’re starting to use the platform in our Medicare Advantage offerings,” Conlin said. “The results are encouraging at this point in time.”

The goal overall is to lower the cost in the health care system while improving quality, he said.

That includes for premiums.

On the 2018 exchange, for a silver plan, the premium is 18 percent lower than another similar plan.

With the exception of last year, the state of New Jersey has had the lowest rate of premium increases in the U.S., Conlin said, which he credited in part to the OMNIA plans.

“Given that we have held the largest market share in each of those years, we were at 72 percent market share (last year), there is meaningful impact on rate increases,” he said.

“That, to me, suggests early success with the program.”

The results have set the tone for the future.

“Unquestionably, much more open, much more collaborative, much more relevant as it relates to health care issues and insurance issues,” Conlin said.