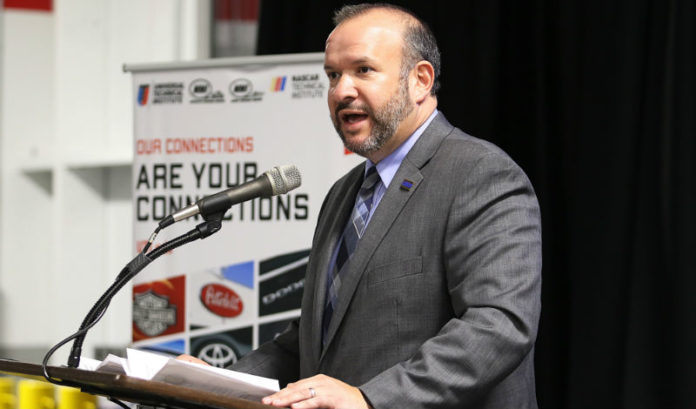 Jerome Grant, the chief operating officer of Universal Technical Institute — a school that provides specialty training to be an automotive technician — said the numbers speak for themselves.

“In the U.S, there’s about 110,000 openings right now for skilled technicians, while our entire industry trains about 50,000 a year,” Grant told ROI-NJ.

“The demand drastically outstrips the supply.”

It’s one of the main reasons UTI cut the ribbon on its first operation in the state — and 13th in the country — earlier this week in Bloomfield.

And the reason why schools such as UTI — those that provide specific job training that leads to middle-skilled jobs for those who are not college-bound — could be a key player in New Jersey’s economy.

“What’s going on here truly embodies what we’re looking for as a department, for employers to have skin in the game, where people are training folks who might not necessarily work for them,” he said.

Approximately 220 students are currently enrolled at the 108,000-square-foot Bloomfield campus. But UTI officials say the center has the capacity to train as many as 800 students in what is typically an 11-month program. And it hopes to have that many next year.

Tuition is approximately $26,000, according to UTI.

UTI partners with original equipment manufacturers in the industry to provide training programs specific to manufacturers such as Ford, Mercedes, BMW and others.

In addition to the technical training, UTI officials said, the school provides students with job-seeking tools, such as resume writing support, career counseling, interview training and access to a nationwide job database.

Asaro-Angelo said the center could go a long way in helping another issue that is impacting the New Jersey workforce: The idea that you have to go to college.

“We really have got to reduce the stigma of not going to college,” he said. “There are systematic things that disincentive schools from pushing children into a non-college path.”

The referendum, which will be on the ballots this upcoming November, would provide $500 million for New Jersey school districts to improve vocational and technical education. New buildings will open and add empty seats for students that would not have been there otherwise, he said.

Asaro-Angelo also said the state will benefit from a $4.5 million partnership grant.

The grant program builds upon the New Jersey Apprenticeship Network announced last March by Gov. Phil Murphy. But more than that, the grant will increase the amount of middle-skill workers in the state while decreasing the degree of the mismatch, he said.

Asaro-Angelo said the grant is available to any kind of partner in the state that wants to create a career pathway for any kind of worker. The grant is open to high schools, vo-techs and community colleges, among others.

“Because, if we are working together to create this ecosystem, in any industry, we can do that, but we got to do it together,” he said. “No employer wants to only hire within their county walls, they want to have a base of possible employees across the state.”

Interest in Camden grows, thanks to ‘Eds and Meds,’ study finds