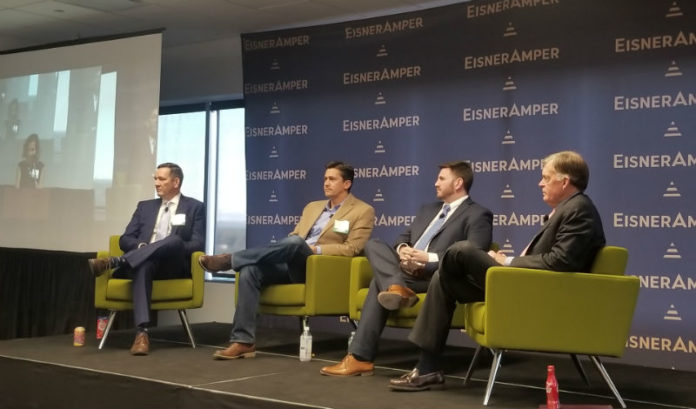 New Jersey is the most densely populated business state in the country, so ensuring that a startup economy is thriving and entrepreneurs feel supported needs to be balanced with supporting the companies that have stayed.

The two were joined by Colin Newman, vice president of public policy at Audible, and Gary Bingel, EisnerAmper’s partner-in-charge of the firm’s State and Local Tax Group, for EisnerAmper’s annual business summit Thursday evening in Iselin.

“The problem we have is we have to make sure that, even though we have an innovation economy that we are pushing — which I’m all for, I think is wonderful — we can’t ignore the needs of the 400,000 or 500,000 companies that are in New Jersey, who have been starving for attention for the last 10 years,” Bracken said.

“I know the governor is, in part of the (economic vision) is to drill down some of the tax incentives to smaller companies, which would be great, to incentivize those people to stay here, grow here. So, we have to have a balanced approach to all this.”

But figuring out how to attract young companies — as well as overcome poor rankings of its business and tax climates — is a challenge.

The state has always struggled with being sandwiched between Philadelphia and New York City. Some play to it as a strength, while others feel like they are stuck in the shadows of the metros.

Audible’s Newman shared an interesting perspective the Amazon company has learned from its offices abroad.

Newman said that Audible has learned that perceptions of New Jersey are different overseas, and could lead to greater international engagement. Especially in a diverse place like New Jersey.

“Berlin has an amazing tech ecosystem,” he said. “Twenty-five hundred startups in just the last decade. It’s fascinating that 43 percent of their startups are immigrants. And New Jersey, obviously, we talked about, the very strong, immigrant, diverse population. I think there’s an opportunity for companies from abroad expanding in the United States to come into New Jersey.

“It’s silly how it might be harder to get a company to move from Brooklyn to Newark, than it is from Berlin or Shanghai to Newark. Because, in Brooklyn, they think, ‘We’re cooler than (them), we’re not going to go there.’ But folks abroad might look at it as, this is just a suburb of New York, this is the greatest market in the world and it’s 9 miles from Manhattan — of course, it’s a great location to go to. It’s really starting to think about those international angles.”