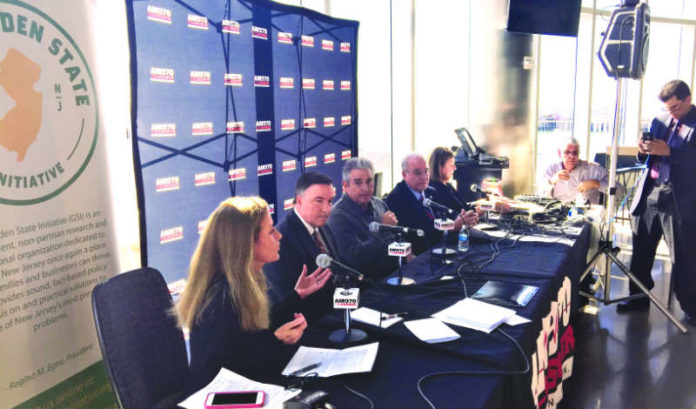 Bruce Deifik got a little choked up when he was discussing the days surrounding his purchase of what is now called Ocean Resort Casino in Atlantic City.

In fact, he had to catch himself and clear his thoughts while talking during a one-on-one interview with Garden State Initiative head Regina Egea at an event on business in Atlantic City held on Deifik’s property Thursday.

The moment didn’t come when Deifik was talking about waking up one morning and realizing he needed to wire $10 million to purchase a property he had never set foot on. That’s just part of the high-stakes development game he plays.

It was when Deifik related his discussion with Mr. Wilson, a man who lives in a small house across from his property — an area of town many developers, politicians and social do-gooders are quick to write off as blight, and something the city needs to rid itself of if it is truly going to regain a place of prominence in the state and as a destination for visitors up and down the East Coast.

Deifik doesn’t see it that way.

And, it was in that moment, when the emotion of retelling a story about a conversation with a longtime local resident, that Deifik showed his hand.

He’s not necessarily looking to flip the property, as many have speculated (more on that later in the column), but he’s looking to make a difference in a city that desperately needs more difference-makers.

“I walked over when there was an article in the Atlantic City Press that said that a Mr. Wilson was very concerned about this behemoth opening next to him,” he told a small audience in attendance — and a bigger audience on Facebook Live and AM 970 The Answer, which will replay the event.

“I took it upon myself to walk over to his house,” Deifik continued. “It’s been there for, I think, 80 years. I walked up his rickety steps and knocked on his door. And he came to the door and he said, ‘Can I help you?’

“And I said, ‘I’m your neighbor. I said I just wanted to stop by and say, “Hello,” because I heard you had concern about some of the properties opening around here.’

“I said, ‘Well, I’m your neighbor and I own that property right next door. I’m here to be your neighbor, not to chase you away, but to embrace you.’”

The two, he said, then spent the next 30 minutes talking about the neighborhood and their places in it.

Thursday wasn’t the first time Deifik retold the tale. He said he told it earlier at a meeting of top business leaders and politicians in Atlantic City — after one member of the group asked the mayor to clean up the blight, meaning houses like the one Mr. Wilson lives in.

Deifik told the man he has a different definition of blight. And he feels eliminating that would do far more for Atlantic City.

“My idea of cleaning up the blight is not dealing with someone’s house,” he said. “My idea is, when you’re driving on the Atlantic City Expressway, and you see the two buildings next to Caesars that will not reopen, they should not be there any longer.

“That sends a very bad message to the visitors to this town and to the residents in this town. Those buildings need to come down.”

Deifik said he can’t wait for those closed casinos to come down.

“When the governor and the politicians and the local businesses and the residents make the decision to take them down, I will participate,” he said. “That will send a very clear message to people that Atlantic City, the renaissance, is happening. We’re building a new foundation.”

One he plans on participating in.

Deifik has heard the rumors about flipping the property and addressed them head on.

“I’ll tell you candidly, we have no intention of doing that.”

Deifik then explained how he has spent 90 percent of the last 18 months living here, as he totals it.

Visits to his homes in Colorado and Southern California have been infrequent — and for short stays when they occur.

“I’m happy to continue building this for the next three, four, five, six, seven, eight years, and making her better every day, because she will get better every day,” he said. “And she will attract more customers every day and will accomplish things — bringing groups and conventions and millennials and families.”

Deifik, however, was transparent. He is, after all, a developer and a businessman.

“If someone came along and said, ‘We just have to own it, name your price,’ is it something you think about as a developer? Sure,” he said. “If someone comes up to me and said, ‘I’ll give you $5 for something I think is worth $2, I’d be lying — and every developer would be lying — if they said, ‘I’m never going to sell it.’

“The only thing that’s not for sale is my wife and my children and my dearest friends and my little dog. Everything else out there, if someone offered you a ridiculous sum for something — more than you ever even thought you could get — you’d take it.”

Even Mr. Wilson would agree with that.