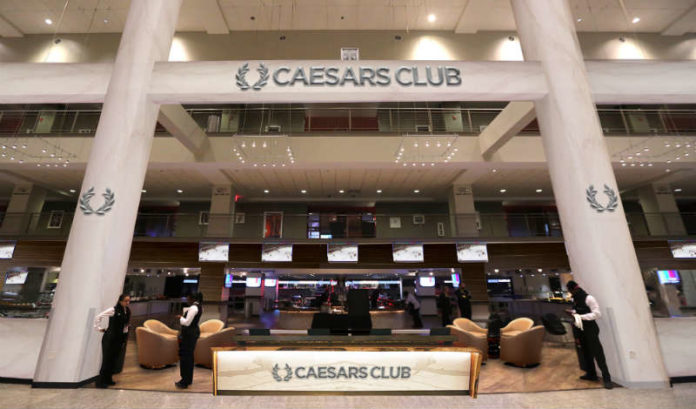 Calling it a pairing that goes beyond sports gambling, Harris Blitzer Sports & Entertainment, the parent company of the New Jersey Devils, Philadelphia 76ers and the Prudential Center, announced a partnership with Caesars Entertainment on Tuesday morning.

Under the terms of the multiyear arrangement, Caesars will open the Caesars Club, a 5,000-square-foot premium restaurant and bar on the west side of the main concourse in the Prudential Center (it replaces the old Ice bar).

The location will be open exclusively to the approximately 1,200 Devils Club premium ticketholders during hockey games, but open to all customers during concerts and other non-Devils events.

HSBE officials said fans will be able to bet on sports — including Devils games — but only through Caesars’ mobile app.

The partnership marks the first time a gaming-entertainment company has reached a deal with both an NHL and NBA franchise. And the partnership is not impacted by the NHL’s partnership agreement it announced with MGM on Monday.

Adam Davis, chief revenue officer at HSBE, told ROI-NJ the club will be ready to open by the end of the calendar year, possibly as soon as November.

And, while the club also will offer non-cash betting casino games, Davis said the club is more about creating a premium entertainment experience rather than being a hub for sports gambling. Davis, however, did say HSBE was determined to align itself with the best sports gambling partner possible.

“Sports betting is now legal in the state of the state of New Jersey, so, for us, it’s incumbent upon us to make sure that we align with brands that our fans can trust and know that they can work well with,” he said.

“Caesars has been a big part of New Jersey for a long time in Atlantic City and I think now with sports gambling legal, they would be able to introduce themselves to Devils fans and Prudential Center attendees alike.”

Davis said the partnership works because the parties connect on a greater level.

“First and foremost, when you talk about trying to partner with like-minded companies. It’s hard to argue that anyone knows how to do entertainment better than Caesars does. And, obviously, we’re close by with the locations they have in Atlantic City.”

Because sports gambling is not legal in Pennsylvania — and because HSBE does not own the Wells Fargo Center in Philadelphia — the agreement will be more of a marketing partnership for the Sixers.

Davis said it will be a way for Caesars to connect with a greater number of fans. But, he notes, most expect sports gambling will be legalized in Pennsylvania, perhaps as early as the first quarter of next year.

“It goes beyond sports gambling for us,” he said. “Obviously, a big part of it is sports gambling and introduces fans of our teams to our mobile app and getting them engaged, but, at the same time, it’s really about introducing our brand.

“We have three locations in Atlantic City and another one just south of the Wells Fargo Center. So, this is more of a holistic play for us and getting in front of folks who are entertainment seekers, the types of people that we like to connect with.”

Marino said Caesars will make sure the club provides a premium experience.

“I think it’s going to change, and it will be new and fresh. It’s a branded play where we’ll want to make sure that when you’re in that lounge, you know that you’re in the Caesars family.”

Caesars will be able to offer entrance to the club to some of its more than 50 million reward club members, Marino and David said.

The key part, however, will be attracting more members, especially those attending concerts.

“I think the concerts are dramatically important to Caesars,” Davis said. “We’ll do over a million concert-goers in a year, and I think the opportunity to introduce Caesars both from a brick-and-mortar and online gaming (aspect) to that consumer is important to them.”

Davis said the club will be a premium experience for top Devils ticket holders — which will help the club differentiate itself from the William Hill lounge that will be situated on the main concourse.

“I think the experiences will be vastly different,” he said. “The lounge William Hill has is available to anyone in the venue, to be able to engage. Whereas Caesars is a bit more of a premium-type experience.

“The Caesars Club is only available to the 1,200 club seat holders in the building for Devils games, whereas the William Hill lounge is on the main concourse and open to everybody.”

“I think it’s a really cool added element experience for our fans,” he said.

A key part will be the non-cash casino games.

“Who doesn’t like to win something for nothing,” he said.

Golfzon Range by Leadbetter — a new way to work on...