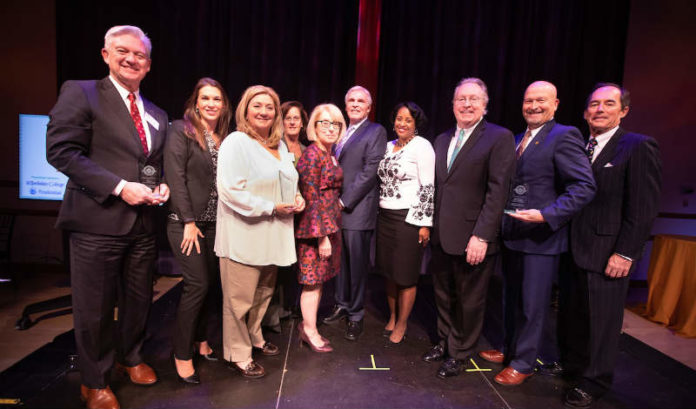 After hearing the stories of giving surrounding the recognition of three New Jersey companies, Chambers turned his attention to Marketsmith Inc. — a woman-owned marketing agency based in Cedar Knolls — and its founder and CEO, Monica C. Smith.

Marketsmith has adopted Camden Street Elementary School in Newark. Smith and her company support the school by donating money and supplies throughout the year, highlighted by the annual Bring Dinner Home program, when Marketsmith employees put on an annual Thanksgiving celebration to feed approximately 1,000 while giving away winter clothes, diapers, books and gift cards.

(Here’s how you can contribute to Bring Dinner Home.)

“I’m so honored to be with all of you, the folks from Atlantic Stewardship, but, Monica, you inspired me,” Chambers told the audience before his keynote address. “And I know how difficult Camden School is, so we would love to, having been inspired by you, provide the funding for you to replicate that at West Side High School.”

The gala dinner audience, filled with heads of businesses, local government officials and students from Rutgers University-Newark and Berkeley College, clapped in approval.

Smith was floored by Chambers’ gesture. But she noted to the crowd earlier in the evening that her greatest wish would be for others to copy her efforts.

“We have not yet met what we’re seeking to do,” she said. “What we haven’t been able to achieve yet is the ability for somebody else to be inspired enough to be able to do the same for Passaic, or Paterson, or Camden, or Trenton.

“Schools that need another angel, or a couple angels.”

The Great Oak Awards, sponsored by NJ Monthly, were established to honor businesses in the state that have exceptional philanthropic efforts. The awards have recognized 40 different companies since their inception. Three companies and one individual were recognized this year: Atlantic Stewardship Bank and Provident Bank, as well as Marketsmith and Chambers.

According to NJ Monthly, a committee of 17 New Jersey philanthropic experts submit their nominations for the awards. Then, 20 companies and six individuals are identified as nominees when NJ Monthly reaches out to them about their philanthropic efforts. The editors of NJ Monthly then chose the four winners based off these interviews and submissions.

Chambers, who began his career as an accountant at PricewaterhouseCoopers, said he found his philanthropic drive while working on Wall Street. Since closing his private equity firm, he has focused all his time on being a humanitarian.

He opened the MCJ Amelior Foundation in Morristown in 1989 as a grant-making entity. He brought NJPAC to Newark with a major donation, adopted West Side High in Newark, has been a leader in the efforts to bring Amazon to Newark, was founding chairman of the Points of Light Foundation and has dedicated his life to fighting malaria since serving as the UN Special Envoy for Malaria.

Chambers also is involved with the Boys & Girls Club of Newark and the Newark Alliance. He worked on the Millennium Development Goals — lofty benchmarks set by the UN to have been achieved by 2015. Now working on the Sustainable Development Goals for 2030, Chambers truly believes in making the planet more sustainable for young people.

“Young people are our only future,” Chambers said.

Among the other winners was Atlantic Stewardship Bank.

The bank, founded in 1985 and headquartered in Midland Park, with 12 branches in Bergen, Passaic and Morris counties, was recognized for integrating tithing into its mission — giving back 10 percent of profits on an annual basis.

ASB gives the 10 percent to Christian organizations, hospitals, fire departments, libraries and schools throughout the state. Employees volunteer at nonprofits such as Eva’s Village and Oasis in Paterson. ASB also assists food banks such as Market Street Mission in Morristown with finances and credit plans.

Since the bank’s founding, it has given away $10.1 million, in total, to nonprofits, and expects to have around $900,000 given away by the end of 2018. CEO and President Paul Van Ostenbridge was there to accept the award.

Provident Bank, founded in 1839 and headquartered in Jersey City, with 90 different locations throughout New Jersey and Pennsylvania, was honored for its foundation, which was established in 2003.

The foundation has granted over $23 million to 2,000 organizations since its inception.

In 2018, through a $20,000 grant, Fulfill — a nonprofit food bank — was able to offer a culinary training program for low-income adults. Neptune-based Fulfill’s mission is to fight hunger in Monmouth and Ocean counties.

This year, the foundation also has given a total of $1 million to recipients including Habitat for Humanity of Greater Plainfield and Middlesex County, Newark Museum, State Theatre New Jersey and Bergen PAC. The bank also operates an employee engagement program, Commit to Care, where over half of its 1,100 employees donate time to philanthropic efforts.