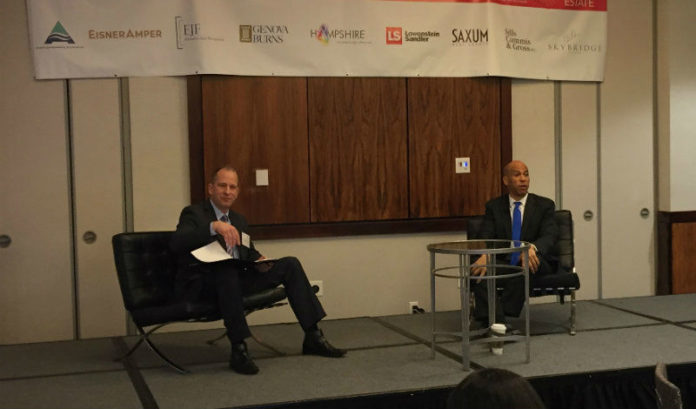 And there certainly were no Spartacus moments.

But don’t be confused, Cory Booker was on top of his game.

For 45 minutes Monday morning, New Jersey’s junior U.S. senator held the attention of more than 200 top-level real estate professionals at the Rutgers Center for Real Estate event on the Opportunity Zone program the Democrat co-authored with a fellow senator, Tim Scott, a Republican from South Carolina.

This wasn’t a stump speech. But it was the makings of one. It was a thoughtful analysis not only of how Opportunity Zones can help low-income areas around the state and around the country, but how investing was the key to a better future.

Booker, who was returning from a trip from New Hampshire (hmm, wonder why he was there?) used Opportunity Zones — a program in which investors can realize significant tax savings if they reinvest capital gains in low-income communities — to share his vision of a better America.

And he did it without dramatics, but with the smarts and substance that long ago made him a politician seemingly destined for greater things.

Booker shared tales from his time as mayor of Newark and talked about the low-income area of the city where he still lives, saying how investment is helping to change the neighborhood and how it can change the area around it.

Newark, East Orange, Irvington shouldn’t be lacking in investment, he said. They should be examples for the country.

“These cities are gold mines,” he said. “They’re domestic emerging markets that are more exciting than anything you’ll see overseas.

“With this region, we should just show this country what can happen when savvy investors, when private-sector people with heart and moral capitalism show how our nation operates a capitalist system that really creates a more equally distributed growth and opportunity.”

He referenced Adam Smith, the famed 18th-century economist and moral philosopher, telling the real estate professionals there are opportunities for savvy investors who have an eye for moral capitalism.

“Read his essays on moral sentiments of man and the obligations for us as free market actors towards the development of humanity,” he said. “America, we’ve gone off track. We’re creating an end into itself thinking that we’re going to develop the nation because of millions of acts of personal greed. No. We have to keep those ideals of our country in place. The idea that everyone is born with the opportunity of genius, whether it’s Newark, Camden or whether it’s New York City and Manhattan.

“When I sit down with a guy like Tim Scott, a conservative, and we talk about our dreams for America, we shared that value that we believe in our capitalist system, that we believe has the larger goal of developing human potential and elevating this country. That’s really what this legislation is about.”

Booker knows the real estate pros in the room know far more than he does. But he knows government has something to offer. That’s why he wants the country to use more of a public-private partnership when it comes to Opportunity Zones.

“Success to me looks like investors stepping up and working with local community leaders,” he said. “Because, as mayor of my city, I knew where we desperately needed investment and where the real opportunities were and, working together with private-sector individuals, we’ve created some really remarkable things in Newark.

“Success to me means that we have about $6 trillion unrealized capital gains sitting on the sidelines. Success to me is moving a significant amount of that money into nontraditionally invested areas, from the rural Appalachian Mountains to urban places like Camden, that they’re doing it in partnership with local communities.

“I do believe that local community should be designing their own destiny and that, that investment in things from businesses, infrastructure to real estate, creates a multiplier effect of workforce development and expanding opportunities. That’s really what gets me excited.”

Investing, Booker said, is the key to the country’s future.

He lamented the fact that the United States no longer is investing in health, technology and science. He’s upset the country is no longer leading the way when it comes to research and development.

“I came of age on the best economy on planet Earth, that built this economy because of the savvy investments we made into society,” he said. “We weren’t afraid to stand up and invest in each other. Pell Grants used to pay for the majority of college. The GI Bill. Research and development that dazzled the world. We were the investors.”

Booker said the country needs to get back to such investing.

And its parties need to come together. The partisan rhetoric of the Brett Kavanaugh Supreme Court hearings apparently is a thing of the past.

He talked about his relationship with Scott and former New Jersey Gov. Chris Christie, both Republicans.

“The biggest challenge in this country is first to unite around strategies that work,” he said. “Tim Scott and I, we disagree on so much, but we united when you have a strategy that could work.

“Chris Christie and I — I could write a dissertation on my disagreements, but if texted him right now and said I was in trouble, he would text me back in a second and say, ‘What can I do to help you?’ Because we’re friends.

Booker even took a swipe at his own party.

“We’ve got to figure out a way to work together to create the moral economy. That’s what I hope you all remember from my ranting.”

Except, it wasn’t really a rant. It was the type of thoughtful display that has made him a rising star for years. And one he’ll need to show more of if he wants an even higher office.