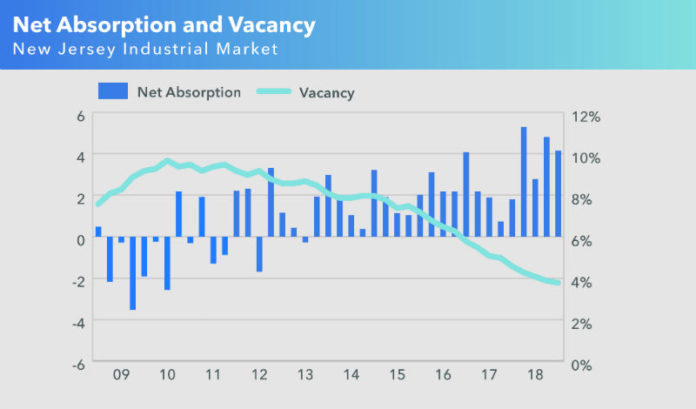 “With industrial space filling up so rapidly, tenants are starting to evaluate their needs for industrial space earlier,” Lori Zuck, managing director at Transwestern, said. “Industrial tenants are realizing they need more time to scour the market for opportunities and may also have to fund their own improvements as landlords become less generous with concessions.”

Transwestern said that industrial vacancy has reached an all-time low of 3.8 percent. In nine of the 25 submarkets, the level measured less than 3 percent, despite delivery of nearly 10 million square feet of new industrial product so far this year. Even with the Route 287 submarket having 2 million square feet of new construction, its vacancy rate declined to its lowest level for a second consecutive quarter.

The industrial sector’s asking rents surpassed an $8 threshold for the first time ever, Transwestern said, coming in at $8.04 per-square-foot. Rents in the industrial market increased for the 13th consecutive time, with five submarkets averaging levels above $9 per-square-foot. Rents also rose in 20 of the 25 submarkets on a yearly basis, measuring 7.4 percent higher when compared to last year and 50 percent higher than five years ago.

“As e-commerce steers the overall industrial market in a more mainstream direction, we’re seeing manufacturing and retail benefit from growing consumer confidence,” Matthew Dolly, research director in Transwestern’s New Jersey office. “Increasing numbers of consumers are feeling optimistic about business conditions, at least on a short-term basis. We expect further firming in the manufacturing sector, and, although there is a shortage of labor, wage growth within the industry seems likely, perhaps making for a more enticing career choice for younger workers.”