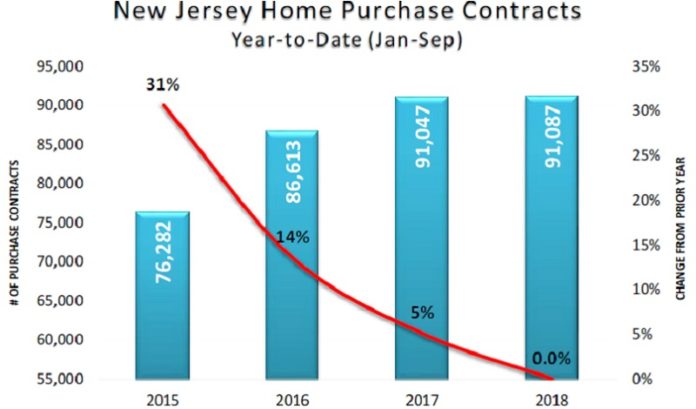 New Jersey’s housing market has hit a slump, but the commercial real estate sector is soaring, according to The Otteau Valuation Group Inc.‘s new report on the state’s housing market.

Otteau found that with the undersupply of housing inventory and a growing affordability gap due to rising home prices and interest rates, the number of home purchase contracts in the state has declined by 6 percent in September compared to the same month last year. Also, almost half of all New Jersey markets have seen a decline in home sales on a year-to-year basis.

Price may be a factor when it comes to home sales. 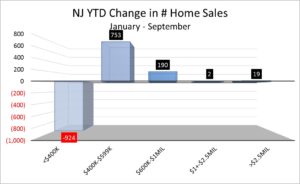 Contract activity for homes under $400,000 have declined due to a supply shortage – one the market hasn’t seen since 2005, Otteau found.

Sales in other categories, however, are seeing increases.

The largest percentage gain was found in the greater than $2.5 million market. Today’s unsold housing inventory, Otteau said, accounts for five months of sales, which is slightly higher than the 4.7 months when compared to last year.

All of New Jersey’s counties have less than an eight month supply, Otteau found. 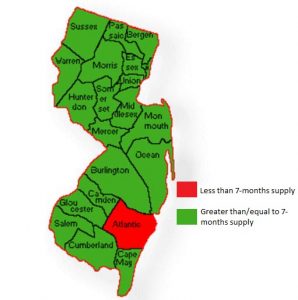 Middlesex County has the strongest market with 3.9 months of supply, with Essex right behind it (4.1), then Passaic (4.2), Monmouth (4.3) and Union (4.4). The counties with the largest amount of unsold inventory are in South Jersey, like Salem (6.6) and Atlantic (7.1) counties. 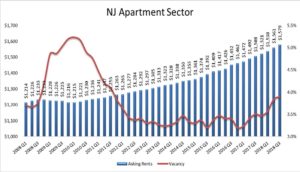 In terms of rental demand, Otteau said the market is robust with vacancy increasing recently. The state currently has a 3.9 percent vacancy rate, which is among the lowest in the nation. This continued strength, Otteau said, allows the market to raise rents. The current value is at $1,579 a month, which is a 10-year high in the state, a 4.7 increase over the past year and a 1.2 percent increase from last quarter.

Regionally, North Jersey has the highest average asking rents at $1,985 per month. 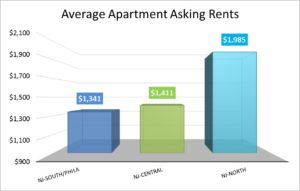 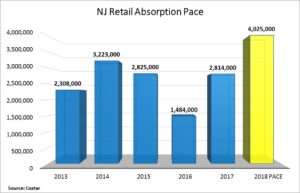 Most of the growth demand in 2018 has occurred in North Jersey, which has seen 1.16 million square feet of positive net absorption from January to September. South Jersey only saw 347,000 square feet of occupancy gains.

Leasing activity has also been strong this year, despite online shopping and its effect on demand for physical spaces. New Jersey had 3.3 million square feet of positive net absorption from January to September of this year. If pace continues, this sector is projected to see an occupancy gain of more than 4 million square feet this year, which would be the largest gain in the past six years. 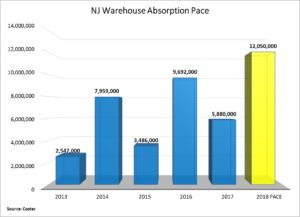 Warehouse space in the state is on a record-breaking pace this year, Otteau said. Occupany has increased by 9.9 million square feet year-to-date, which is greater than each of the previous five years, with much of the activity occurring in North Jersey.

As a result, warehouse building vacancy in North Jersey has declined to 3.1 percent.

One wild card in the real estate sector in employment. 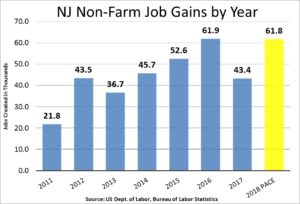 New Jersey has exhibited job gains in seven of the past eight months, according to Otteau.

From January to September of this year, there has been 49,100 non-farm jobs created in the state, compared to 34,5000 during the same period last year.

Otteau said if the pace continues, nearly 62,000 jobs will be added by the end of the year.